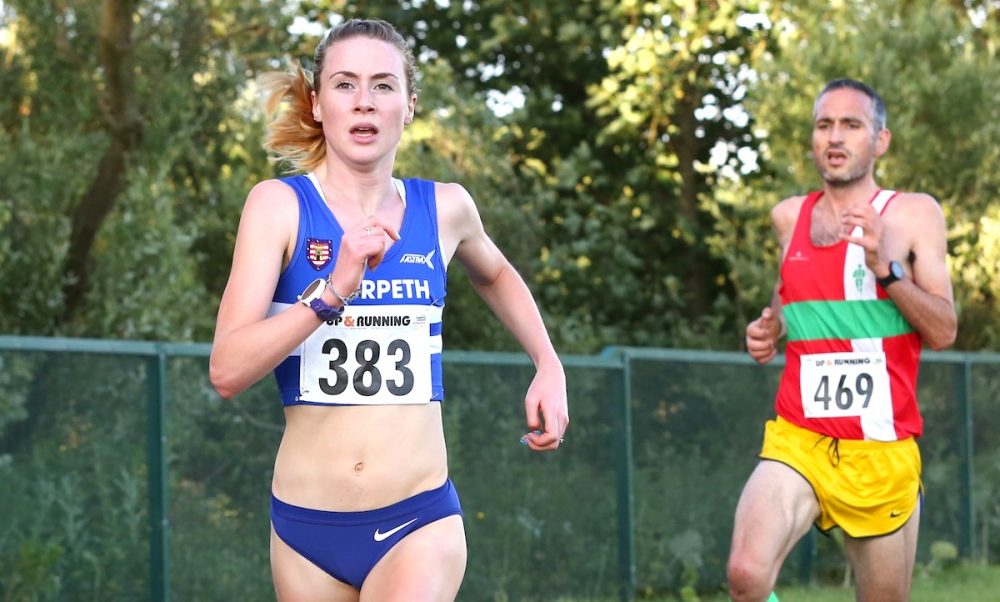 The talented Scottish endurance runner chats about her achievements so far this season, aims for the track, training, and incredibly long warm-up runs in Spain!

When Edinburgh Uni Hare & Hounds’ Mhairi MacLennan broke the tape at the recent Podium 5k, her winning time was not only a massive 69 second personal best, but also a validation of her big goals for this year.

MacLennan ran 16:11 to win the sub-16:30 elite race at the Barrowford event in June, beating off stiff competition from the reigning champion, Becky Rigby, and fellow Scot, Steph Pennycook, both of whom also ran their fastest ever 5k times that night.

The 23 year-old is now ranked joint 10th in the UK for the 5k this year, but MacLennan has bigger goals for the rest of 2018.

Considering her pre-session warm-up jogs were nearly an hour long when she spent a year training in Spain at the country’s High-Performance Centre in Madrid, the Edinburgh University student certainly has plenty of endurance behind her.

Now she is keen to build on her success so far this year to convert her hard-earned endurance and speed into even faster times on the track this summer.

We chatted to the talented Scot about her achievements so far, her training and 50-minute warm-ups in Spain.

Why was she in Spain over 2015/16, what was the training like and what did she learn from her time there?

“I studied Spanish and English Literature at Edinburgh University, so part of that was a year abroad in my third year,” she explains. “I was studying at Universidad Autónoma in Madrid, so I joined the local club, AD Marathon, and was put into a mid-long distance training group. It was great for my Spanish and I learned a lot about different styles of training.

“We would often do those 40-50 minute warm-up jogs, which was very different to what I’d done at home. I would never do this now but it was an interesting insight to how different athletes train!

“My year in Spain opened my eyes to another level of running I hadn’t experienced in Edinburgh, as I was training at the High-Performance centre, with access to endless trails in Casa de Campo. It’s also where many of the top Spanish athletes train. I competed in a lot of the international races out there, like the Cross Elgoibar, Atapuerca and the Spanish National Cross Country Championships, representing Madrid.”

MacLennan has transferred her success on the country in Spain to top class form off road in Scotland this year, following up victory at the Northern cross championships with a win at the Scottish national championships. She also enjoyed a great run at the Great Edinburgh Cross representing Great Britain, finishing first U23 in the senior event.

Last year she came ninth in the U23 European Cross Country Championships in Samorin, proving her ability to compete on an international stage under pressure.

So would the well-travelled athlete say cross country was her preferred discipline?

“Definitely, I’ve always been a fan of the mud and the physical challenge of the hills, grass, mud and whatever else it throws at you,” she confirms. “I grew up in Inverness, in the Highlands, and experienced some very challenging courses up there which sparked my interest in running!

“There are no words to describe how exciting it was to receive my first call-up to the GB team last December for the U23 team at the European Cross Country Championships, I honestly couldn’t believe it until I was on the plane to Slovakia! It was a huge learning experience, and I would love to make another team in the future!”

MacLennan may have proved her speed off road at the top level, but she is now also showing her pure class on the road, winning the latest Podium 5k in 16:11. Did she have any idea of what form she was in beforehand, bearing in mind her PB was much slower going into the race, and did her victory at the Lancashire event give her confidence for further success over the distance?

“I have quite a few track 5ks lined up this season, but thought the Podium 5k would be a great opportunity to just get out and test myself before the British Champs. I enjoyed racing there, and would highly recommend it to others. It’s no frills, flat and fast with plenty of competitors to pull you round.”

Looking at MacLennan’s soaring progress this year, it’s intriguing to find out – from a fellow runner’s point of view – how she has achieved it all. We all know consistency is key, but is there another secret to her success?

“Consistency definitely, being injury-free too, and having a great training group is also important,” she reveals. “I’ve been able to put together a really consistent block of training this year, which has given me confidence over races. I’m really happy with the set-up I have in Edinburgh, at home and within my training group.

“During term-time we have an amazing group of girls and we all help each other in training. I get great support from my fiancé (Edinburgh University AC’s James Taylor) at home and in training, and my coach, John Lees, is massively supportive too. He’s an independent coach but he also coaches a lot of the girls in the Hares & Hounds. Whilst I don’t train with the club, they’ve been very supportive since I joined four years ago, and I enjoy racing for them at BUCS each year.”

The 23 year-old juggles her training with a research masters in 20th Century Spanish Women’s Writing at Edinburgh University, as well as part-time work as a receptionist and Spanish tutoring.

She explains how she works alongside her coach (Lees) to ensure her training schedule is as specific to her needs as possible.

“My coach and I identify goals and then plan my training to build up to those,” she says. “We discuss the training and set the specifics on a weekly basis depending on my races, my menstrual cycle and any other commitments, such as work or university deadlines.

“While most weeks follow the same structure, the exact sessions may be different each week. My coach doesn’t set specific paces for sessions or easy runs, as it’s important for me to listen to my body – the effort level is more important than the pace.

“I generally wear a watch for races, but not to look at during the race, it’s more to help understand and learn from the race afterwards. I do the same in training, I run to feel and generally don’t over-analyse data but it is useful to track improvement.”

Saturday – Race or hill reps and tempo work
Sunday – Long run varying anywhere from 12-18 miles depending on the time of year and the phase of my training. So what’s next for this bright young Scot?

“I have the British Champs next (this weekend), and I’m also looking to getting my first senior Scottish Championships title on the track over the 5000m in August,” she says with impressive confidence. “Then I’m looking to get another solid 10,000m track race in at Ladywell in September (in Lewisham, London).

“However, this season I’m just focusing on enjoying racing and being competitive at a senior level.”

The grounded Edinburgh-based athlete is all too aware that she is not a one-woman team, and professes her thanks to everyone who has helped her so far.

“I’d like to say a massive thank you to my coach and to my fiancé for their continuing support and seemingly endless patience with me,” she says. “Thanks also to my training group for getting us all through the toughest sessions year-round, and to Inverness Harriers and Morpeth Harriers for their support, and to the Duncraig Eductional Trust.”

Keep your eyes peeled on this weekend’s British Championships 5000m for the girl who earned team gold in her first outing in the GB vest at last year’s European U23 cross country championships.

She may well be up against the likes of fellow Scots Steph Twell and Eilish McColgan, as well as Charlotte Arter and US-based Amy-Eloise Neale, but don’t bet against her finishing in the top three at least.

MacLennan is one to watch.