Adam Craig is reaping the benefits of his time in America 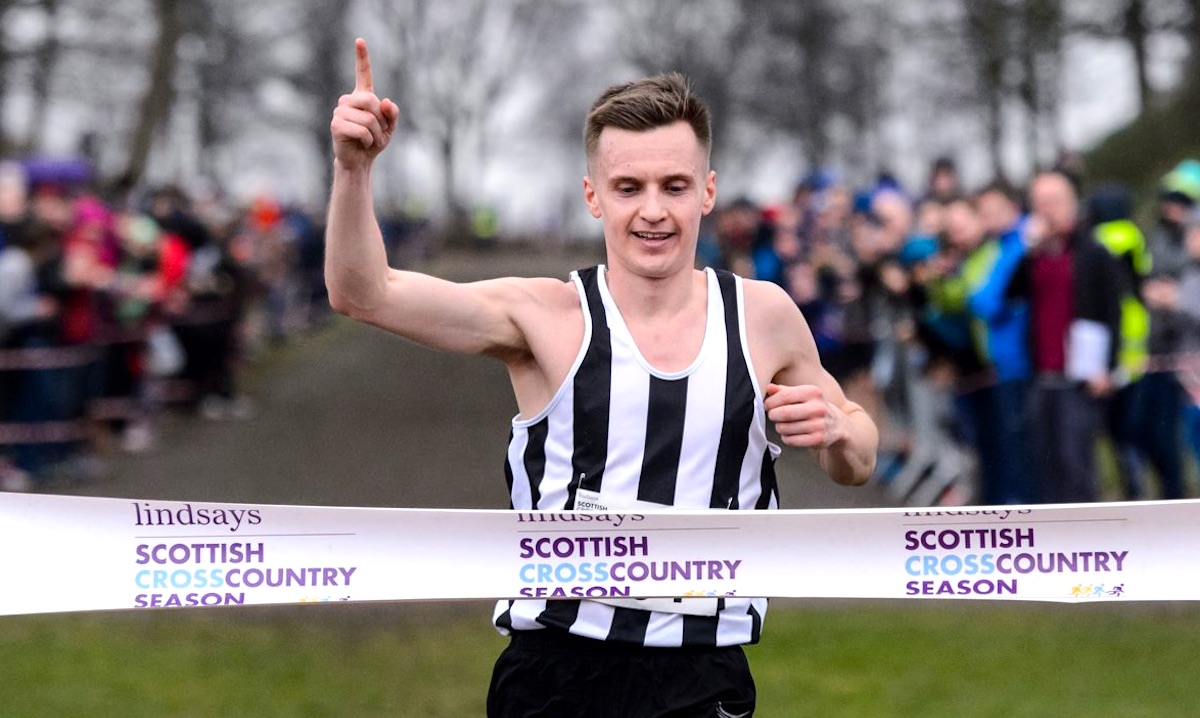 The Inverclyde athlete’s dominant victory at the Scottish National Cross Country Championships was confirmation, if any was needed, of his emergence as one of the UK’s most exciting talents on all surfaces.

Such was the extent of his supremacy in Falkirk, Adam Craig crossed the line arms aloft nearly a minute clear of the competition.

Not restricting himself to glory on the country, the Lauder-born star has enjoyed a superb start to the year on the roads and the track, boasting impressive versatility.

Along with a 7:57.66 runner up spot at the recent indoor Scottish 3000m Championships, Craig preceded his National cross win with the equal fastest 5k by a Brit in five years.

Running in the dark blue colours of his national vest for the second time in a matter of weeks, Craig shot around the Armagh International Road Race to post a 13:45 debut for the 5k road distance, finishing just two seconds behind the victor, Finland’s Topi Raitanen.

Asked how he feels about his redoubtable impact on the British racing scene since returning from university in America – and in particular his Scottish National win – he is modest to a tee.

“I am obviously happy with my run at Falkirk but I certainly didn’t expect to win,” he reveals. “It was a pleasant surprise to win and by such a margin. Along with my run in Armagh, I feel I’ve made up for the disappointment at the British Indoors.” That ‘disappointment’ he refers to relates to his below par result at the British Championships 3000m in Birmingham, where a gutsy display of front running following a slow first couple of laps did not have the desired effect.

While he may have eventually crossed the line 12th in a time that in no way reflected his undoubted fiery form, the way he attacked the race when it was in danger of becoming a very slow, tactical affair was admirable.

“I knew I was fit and in low 7:50 shape, particularly following on from my run at the Scottish Indoors,” he explains. “I just felt I needed to execute that time, so when we jogged through the first two laps in 67 seconds I went for it.

“By the time we got to the last four laps I’d burned out, but lessons were most definitely learned, and I loved the whole experience. It was my first time at the Birmingham indoor stadium, and to get the chance to chat with people like Chris O’Hare in the warm up zone was fantastic.”

By now it’s becoming clear that Craig is most definitely a glass half full kind of athlete, focussing only on the positives and learning from the negatives.

Bouncing back with a positive attitude

That upbeat attitude and gleaning as much as he could from his first British Indoors outing meant he bounced back in glorious style in Armagh.

“It was a blessing in disguise to race so soon after Birmingham,” he says with a smile. “There were lots of other athletes in Armagh who were also unhappy with their runs at the indoors, so we agreed to help each other to run as fast as we could in the 5k.”

That gentleman’s agreement paid dividends for Craig, Sam Stabler, Andrew Heyes and Phil Sesemann in particular, all of whom buried their own Birmingham disappointments with PBs and top six positions in Northern Ireland. Earning his second Scottish vest in the space of a few weeks – adding to his fine display in his national colours in the Great Stirling Cross Country International 1.5k relays in January – represented the appreciative recognition from Scotland’s selectors of his incredible form since returning from the University of Mount Olive in North Carolina last summer.

Aside from an ultimately ill-advised decision to take up his first invitation to race the British Championships in Birmingham last June – Craig finished a weary 23rd in the 5000m after a hectic cross country and track season in America – he has been an exciting athlete to watch on all surfaces.

Six months of glorious racing since returning from America

Following a well-earned summer break he bounced back to win the Great Scottish 10k last September in 29:43, and, just two weeks later, finished a fine sixth at the Cardiff Cross Challenge.

Switching back to the roads, the former Edinburgh AC athlete took victory at the Jedburgh 10k, before earning his most high profile podium topping result on British shores yet – the Leeds Abbey Dash 10k title in a PB 29:08.

Proving his formidable ability to race just as well on both surfaces, he enjoyed the first of two fierce battles with Perth Strathtay’s Sol Sweeney at the Scottish National Short Course Cross Country Championships to come a close second, before another creditable British Cross Challenge performance at the European trials in Liverpool, finishing 13th in a stacked field.

“I definitely believe the amount of racing I did in America has prepared me very well for competing regularly at a high level in the UK,” he reveals. “I spent the first year over there adapting to my new programme, but by the second and third year I was getting some good results.

“Not just that, I enjoyed some incredible experiences at some of the meets, such as mixing with athletes like Paul Chelimo in the warm up zone at the Camel City Invitational 3000m!

“Races like that, where you get special treatment before and after the race, helped me prepare for the championships experience that I hope to enjoy more of in the future.”

The fact that Craig gets as much out of the positive race experiences as the negative bodes well for the future, as what athlete can say he or she always races well, regardless of their level?

Reflecting on last summer’s British Championships he accepts that pure excitement overrode any underlying fears that he wasn’t in the right place fitness and energy-wise for the 5000m European Trials event.

“It was a silly decision to race there, I’d only had seven days off in America between the cross country season and the indoors, and had been racing non-stop from January to May,” he reveals.

“However, lessons have been learned. I also loved the whole experience again, racing against the likes of Marc Scott and Andy Vernon, I look forward to doing it better next time!”

The nine time All-American graduated with a degree in Exercise Science last summer, and, on his return to the UK, decided to settle in Glasgow.

Joining Inverclyde AC from his old club, Edinburgh, was a straightforward decision for the talented young Scot.

“I wanted to be with a local club in Glasgow, and, because I was already training with some of the Inverclyde lads, it made sense to join up,” he explains.

“We link up whenever we can for long runs and I try to fit my schedule in with some of the endurance group’s longer sessions when possible. It’s also great to be part of a club that puts out strong teams at relay events.”

It’s no understatement to say that Inverclyde AC have been making a name for themselves in recent years, and their award for the Scottish Athletics ‘Impact Club of the Year’ was just reward for the hard work the coaches and athletes have been putting in for more than a decade.

It’s clear that the combination of his successful time in America – which included winning the Colonial Relays 10,000m in 29:39.72, the Mt. SAC Relays 5000m in 13:58.52 and a 10th place at the NCAA Division II Cross Country Championships – and the way he’s hit the ground running on all surfaces since settling back in the UK are signs of much greater things to come from this exciting young talent.

Craig’s next race will be the UK Inter-Counties on March 9th, which double up as the World Cross Country trials.

As balanced as ever in the face of another big challenge, the Loughborough-bound Scot insists he is just looking forward to the experience.

“It will be my first time racing the best of the British elite on the country at this event,” he reveals. “I’ve finished my indoor season early so my training is more cross-country based now before concentrating on preparing for the outdoors. I will do my best at Prestwold Park, and enjoy competing against some top runners.”

Craig may not realise it yet, but he is now undoubtedly counted amongst the top runners he’s referring to. His modesty and refreshing attitude to every race he takes on is something that will surely stand him in good stead as he progresses up the UK, and global, ranks.

Keep an eye out for a follow up piece focussing on Craig’s training and coaching set up and his future racing plans!