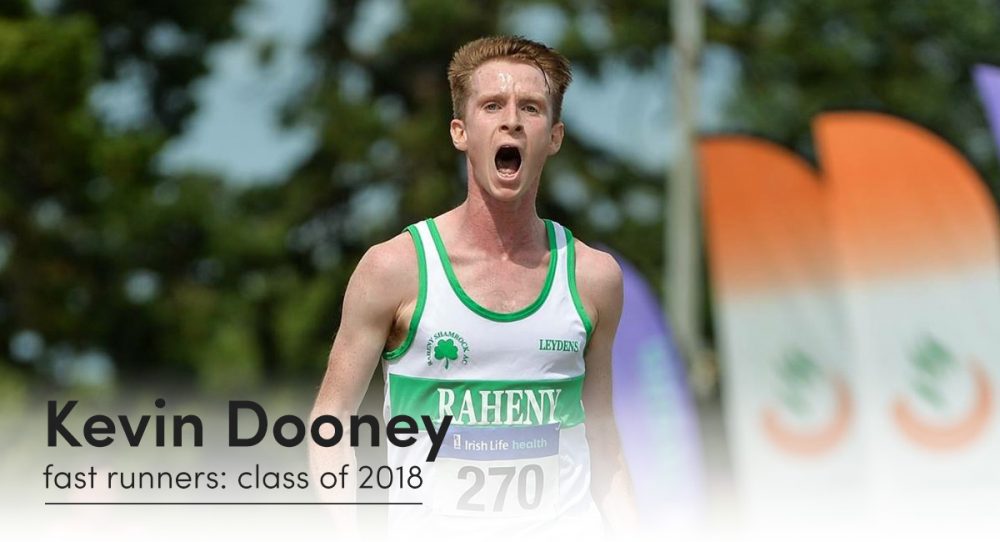 Kevin Dooney, son of Roy and Greta and brother of Conor, comes from a family of Irish international athletes.

A product of the American collegiate system, the 24-year-old recently represented Ireland at the European Cross Country Championships in December 2017.

For the year ahead, the Raheny Shamrock runner has ambitions of qualifying for the World Half Marathon Championships and the European Athletics Championships, as well as running a personal best on the track.

Additionally, Dooney will look to increase his mileage in 2018 as he considers a marathon debut in the future.

Goals or targets for 2018
1) Qualify for the World Half Marathon Championships in Valencia in March
2) Qualify for European Athletics Championships in Berlin in August
3) Consistently build up to higher mileage with an eye to a marathon debut in the coming years
4) Run a PB on the track, my current ones have stood since 2014 so I think it’s time they were rewritten

I studied history at Yale University in America and also captained the cross country team in my senior year.

In getting my first senior cap for Ireland, I completed the family set of my father, mother and two brothers being internationals.

Until April 2017, I timed all my runs on the same €10 Casio watch. I eventually caved to the Garmin peer pressure and haven’t looked back. Everything I do now gets logged on Strava despite my coach wondering who could possibly care or want to see what sessions I do.

I try not to question that too much. It’s just what I do and how I see myself now. It is a brutal sport so I see no point in going after it half-heartedly and getting half-hearted results. I’ve been lucky enough to be successful throughout my career, which has kept me wanting to come back for more.

Mile repeats with 60 seconds recovery. This was a staple workout in college, generally, we would do seven and it was a very useful benchmark of where I was fitness wise.

3 x mile at 5k race pace followed by 2-3 x 400m. Just a painful session. I only ever did it twice, but it still stands out as the one I remember hurting the most.

I’ve been eating a banana and three fig rolls before every race since I was 14, hasn’t let me down yet.

I generally race on a Sunday and so head back to the parent’s house for the Sunday roast, and it’s always a highly satisfying feed prepared by my dad.

It has been great to see the current group of younger British athletes running so well and competing on the world stage.

Historically I’ve always looked at the Irish marathon runners of the 1980’s and 90’s and hope to reach a similar level.

Aware, which is a depression & bipolar disorder charity in Ireland.