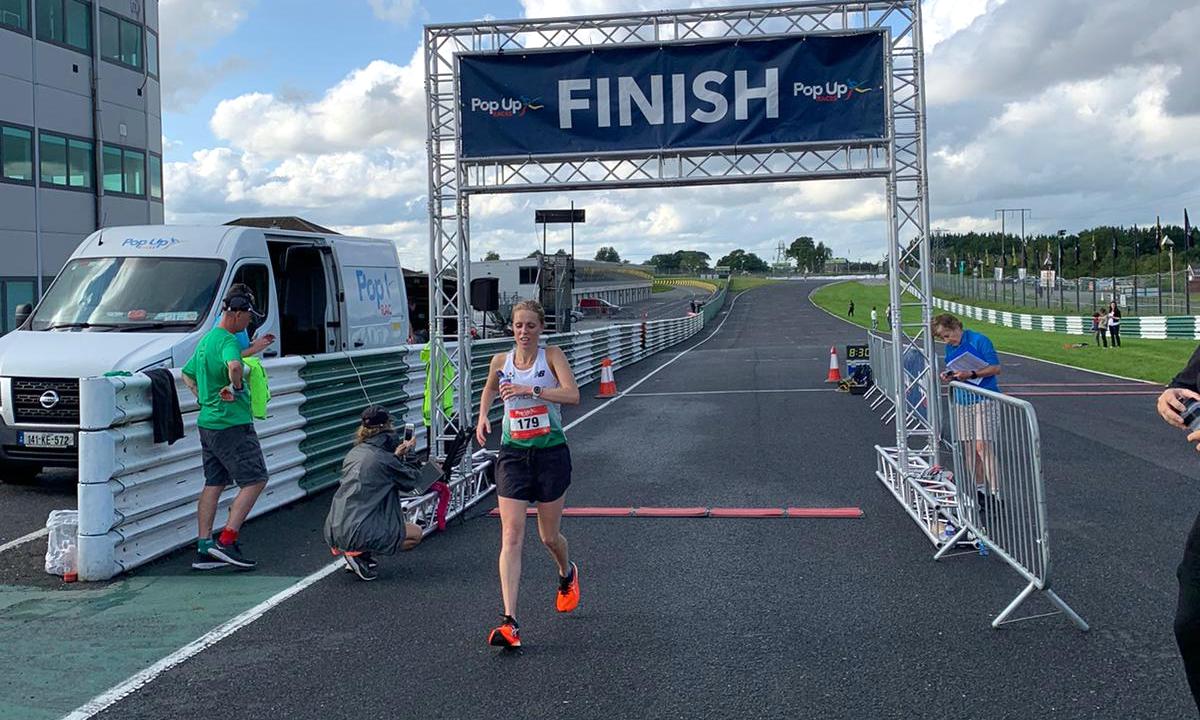 Reflecting back on a less than perfect build-up to a race is something we all do at some point. Karla Borland takes us though her Anglo-Celtic Plate 100k training and performance.

It’s taken me a while to be able to write this which sounds more dramatic than it is!

If you’ve been following my blogs and social media, you’ll know that I had a rocky Spring. I tripped in a cool down in April and banged my knee. After a lot of rest, some attempts to train and race (I dropped out of the Thames Path 100 at 40 miles) I got a MRI in June and found that I’d fractured the bone under my cartilage in my femur and had lots of tibial bone bruising.

There have been quite a lot of changes to my racing plan since then, but I eventually settled on competing in the Irish 100km Championships in August.

Trying to string some string weeks together

I felt like I’d had my fair share of bad luck this year so was keen to get a decent result down. I strung some good training weeks together throughout the summer and did a great long run on the Isle of Wight on the Red Squirrel Trail in very hot conditions in July.

I’m a big kid and I love spending time with my nieces and nephews so following my 35 mile long run I decided it would be fun to go along to an inflatable water park.

In the back of my head I could hear a small voice saying things like ‘recovery, injury-risk etc’ but I decided to ignore that small voice.

Unfortunately, a large man slipped on the platform 2 metres above me, hit me and then we both tumbled into the water. I felt a bit rough that evening but put it down to being dehydrated and drinking champagne (the best recovery drink?!). The next morning I woke up to find that I had pretty severe vertigo and a very sore head. This continued for the next 2 weeks.

It never rains, it pours

Just as I was starting to recover and thinking about doing some decent training, I had my second vaccine. I trained as a vet at Cambridge and like to think of myself as a scientist first and foremost.

I’m a huge vaccine fan. I think it’s incredible that the vaccines have been produced and I think that everyone who can have one should.

Sadly, I was one of the few who had a vaccine reaction – huge rash, lymph nodes in my groin and armpit huge and feeling like I’d been hit by a bus. Another training week gone. A light at the end of the tunnel

The good news in the middle of all of this was that Northern Ireland gave me a late call up to the Anglo Celtic Plate team. My first senior international vest! It’s hard to put into words how much this meant to me.

In the back of my head I was starting to wonder whether my body was asking for a break but I was really motivated to push on and try to do my best for the team.

Luckily I had a week off coming up with my family in the Cotswolds. It was now 2 weeks until the race and I was keen to get some last-minute work in. I trained hard during the week and other than feeling really tired (hanging out with nieces and nephews is super fun but exhausting) I did some great running.

Another hurdles to jump

On the last night I had sudden onset extreme nausea and missed our final meal together. Instead, I lay in the car trying not to puke. I thought I might have eaten some dodgy whitebait so hoped it would pass. Sadly it didn’t!

One week out from the race I spent the weekend in bed taking anti-nausea medication and trying to eat intermittently. It resulted in some difficult conversations between me and my husband during the week.

He thought I was crazy to race but I couldn’t get my head round not trying. It’s fair to say that my mum was also on my husband’s side. We flew to Dublin for the 100km and I had a tearful evening before as I felt so rough.

Tom Craggs, my coach, emphasised how important it was that I was healthy but he also knew how much the race meant to me.

Head out and see what happens

I’m quite a nervous racer so I had my usual pre-race dodgy tummy which felt pretty normal. I managed to eat some breakfast and nibble a few crackers before the start. I was keen to get going as I knew I was unlikely to feel ok for very long.

Up to 20 miles or so I felt fairly good – on the pace I was hoping for, and I was drinking and feeling ok. Just after the 20 mile mark I started to feel really nauseous and regurgitate anything that was in my stomach. I’d brought some anti-nausea medication with me so took that and tried not to panic.

Unfortunately it progressed and the only thing I could intermittently keep down was flat coke. In endurance running flat coke is also known as ‘the little red ambulance’ and it certainly felt like it. At one point I confided in a fellow Northern Ireland runner how bad I was feeling. He gave me a great pep talk about how tough I was and somehow I kept moving.

It’s in the head, not the legs

I can’t remember much from 26 miles onwards. Repeatedly it felt like I couldn’t run another lap (the course was 1.14 miles long) and I did a lot of self-talk and negotiation in my head. I repeatedly just ran to the next corner or next section of the lap. I tried to keep smiling and moving, even if I was moving slowly.

By some miracle I finished and unexpectedly won the silver medal in the Irish Championships. Our team won bronze and I got the NI and Ulster record for 100 kilometres. The next few days weren’t pretty – my parents were so worried they almost didn’t put me on a flight home, but I thought the prospect of 3 hours in a car was worse than a 1-hour flight.

I’ve never gone so deep mentally or physically in a race. Since then I’ve had 2 weeks off running and am just starting to jog again. I’m still intermittently nauseous but starting to feel a bit better. I’m still not sure it was the right thing to race but I’m proud that I toughed it out. When I eventually start to feel myself again I’m excited to see what I can do when I’m feeling good.

Running with Mum
Running during pregnancy