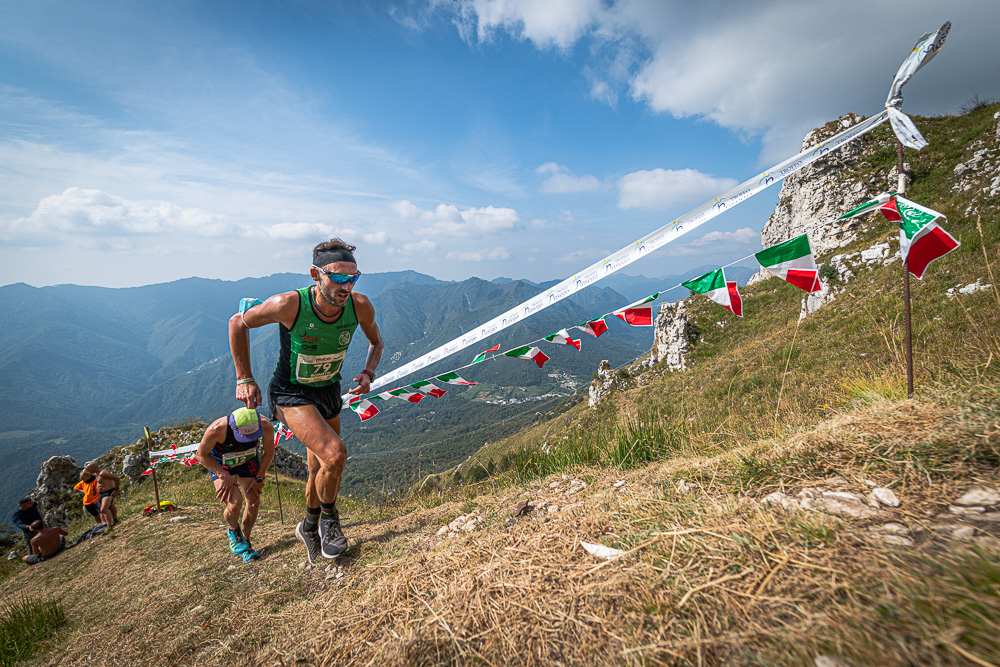 If you look carefully Ally is the one behind. Photo: Marci Gulberti

The 7th round of the mountain running World Cup took place last Saturday in the small town of Casto in Brescia, Italy.

Vertical Nasego climbs 1000m over 4.3 kilometres from the town centre to the skyline above, finishing just above Rifugio Nasego.

The elite startlist was packed with big names; past winners, world champions, World Cup winners, high flyers in this year’s rankings. The great and the good of mountain running, primed for a hard 35 to 40 minutes.

Through a convoluted and boring combination of procedural difficulties and nepotism, the elite startlist also featured me and Paul Tierney. Essentially, we had ridden in on the coat tails of Sarah McCormack, Paul’s better half and winner of the 2020 Trofeo Nasego, the 21k mountain race that takes place on the Sunday.

On the WMRA media team’s copy of the startlist there was a box for biographical information. Past results, current form, that kind of thing. Paul got his justified plaudits; legendary ultra-runner, Lakeland 100 winner, Wainwright’s record holder etc. Equally justifiably, the box next to my name was blank.

Dinner at the race hotel the evening before was an intimidating experience. Timothy Kirui fiddling with his phone. Andrea Mayr calming tucking in to her tiramisu. We occupied ourselves with reciprocal colourful language lessons with some of Sarah’s U.S. Malonno friends.

Race day arrived and me and Paul were mincing around Casto, picking up our bibs and jogging around. I was number 12, Paul was 13. Already, I was mildly embarrassed. I could see people glancing at my number, then up at my face, and looking non-plussed. Huh, haven’t seen that guy around before. He must be hot shit. How disappointed they will be, I thought.

As the clock ticked down to start time and the DJ continued assaulting Casto with the same ear-splitting beats that he’d been churning out since 8 in the morning, the race organiser, Alex Scolari, grabbed a microphone and called the runners to the starting pen.

As we filed dutifully past the final number check and into the road, he moved on to introducing the elite field, sounding more and more like the announcer at a darts match.

One by one the racing snakes came forward and were ushered to their place, chalk on the road laying them out in a grid like as if this was motorsport. A proud father at the start-line with his two sons.

In the red corner…

Polite applause from spectators and Ondřej’s fellow runners, he gave a wave as he walked to the front.

I stood aside to let David past and looked over at Paul. Wearing number 13. Surely Alex wouldn’t. . .

I couldn’t translate exactly what was said but I got the jist.

The price of a free entry

Judging people’s facial expressions with masks on can be a tricky business, but I’m fairly certain Paul’s said that he wanted nothing more than to disappear.

Even then, I was so busy laughing at Paul’s reluctant walk forward that it didn’t even occur to me that I might be next. I didn’t hear what Alex said about me but presumably the accolades that he was listing for everyone else were notable by their absence.

Mortified, I shuffled forward and took my place beside Paul. As the rest of the elite field came forward I stood there, cringing, laughing, clapping, sheepishly scuffing my feet across my own personal semi-circle of chalk.

I don’t know if I’ve ever felt more out of place. I could feel the contemptuous stares of the runners lined up behind me. Runners I had zero chance of beating. Part of my excitement about running at Nasego was to see first hand all the noise and hype that surrounds a race at this level, especially in Italy where the history and culture surrounding mountain running is so strong. I hadn’t planned on being directly involved.

But for all that I felt like an enormous fraud, I was still having a bloody great time.

Then the gun went off and I lost ten places. We never thought we’d get two uses of this picture of Paul Tierney on the website this week. Shall we shoot for a third? Photo: Marco Gulberti

Mercifully, there are a few hundred metres of road to allow runners to find something like their rightful place. Marco, most enthusiastically potty-mouthed of the U.S. Malonno contingent, appeared silently on my left. I slapped his shoulder and said something vaguely encouraging. He glanced over at me, cool and calm.

“Bawbag,” he said, and cruised on up the road. I almost fell over I was laughing so hard.

Vertical Nasego is a race of two halves. The first half picks its way up from Casto, on and off the hairpinning road that rises out of town, linking up still smaller towns and groups of houses.

Dusty trail, concrete steps, at one point I’m sure we ran through someone’s back garden. Sunday’s Trofeo Nasego was doing triple duty as a World Cup race, the Brescia district champs and the Italian long distance nationals; green, white and red tricolour streamers were taught across the road the whole way up, big bunches of them stretching between buildings, telegraph poles and lampposts.

It was hot. Full sun, reflecting off the tarmac; my legs felt fine but I genuinely feared that my head might explode.

Marco was just one hairpin ahead as we ran through Famea, where Trofeo Nasego would finish and where the previous evening the local mayor had cut a ribbon to inaugurate a new roundabout featuring a statue of the race’s logo. Really, you don’t get this kind of thing at Arrochar Alps.

All change in the second half

Leaving the last buildings behind, we ran briefly through the woods before popping out onto the open hill side and beginning the race’s steep second half.

Away from the main walking trails, the race route is narrow, clinging to the side of the hill and zig-zagging up between spectacular rocky bluffs. It all felt a bit precarious. Go skidding off the downhill side of the trail and you might not stop for a while.

Fear for life and limb aside though, the Brescia Prealps are lovely. Steep, wooded hills with impressive limestone crags. The Basque Country with a spoonful of Dolomites stirred in. Blue sky, green hills, an intermitten line of light grey in between, it really is gorgeous.

In the late stages of a vertical kilometre you don’t really see much of that. Eyes full of sweat, I stared at the ground in front of my feet. More than once I failed to see a corner coming and stumbled off into the long grass.

Marshalls and spectators said all the approriate encouraging things, but the effusive thanks I’d been dishing out in the race’s early stages had given way to spittle-loaded grunts. I looked ahead. Marco was closer. Definitely. But was I closing in or was the gradient doing it for me? At 25 minutes per kilometre a 50 metres gap is bigger than it looks. I was desperate to catch him. The dream of breezing by in the finishing straight and calling him a filthy a******e spurred me on.

The last pitch to the crest of the ridge was hideously steep, what trail there was just one faint set of footprints wide. I moved out to pass a guy in a green vest, hands pulling at the grass, frantic to get around him and back on the path. Slotting back into line, I genuinely thought I might vomit into the heels of the next guy’s shoes. I passed him too (when you blow up in a VK you really blow up) but Marco wasn’t getting any closer.

The finish line of an uphill race, particularly one as steep as Nasego, is an interesting place. At a 10k, runners hit the line with some momentum. Here, as soon as the effort level drop, so do you.

With the finishing arch perched right on the crest of a ridge only a few metres wide, exhausted runners were literally crawling to get out of the way of those behind.

With Marco 12 seconds ahead and my closest persuer 11 seconds behind, I crossed the line with sufficent reserves to remain upright just a moment longer. I staggered on for a few metres and slumped on the ground next to Marco. I called him a filthy a******e. He looked over at me, smiling.

Into the big hills
The road up the mountain