Adventures for the future 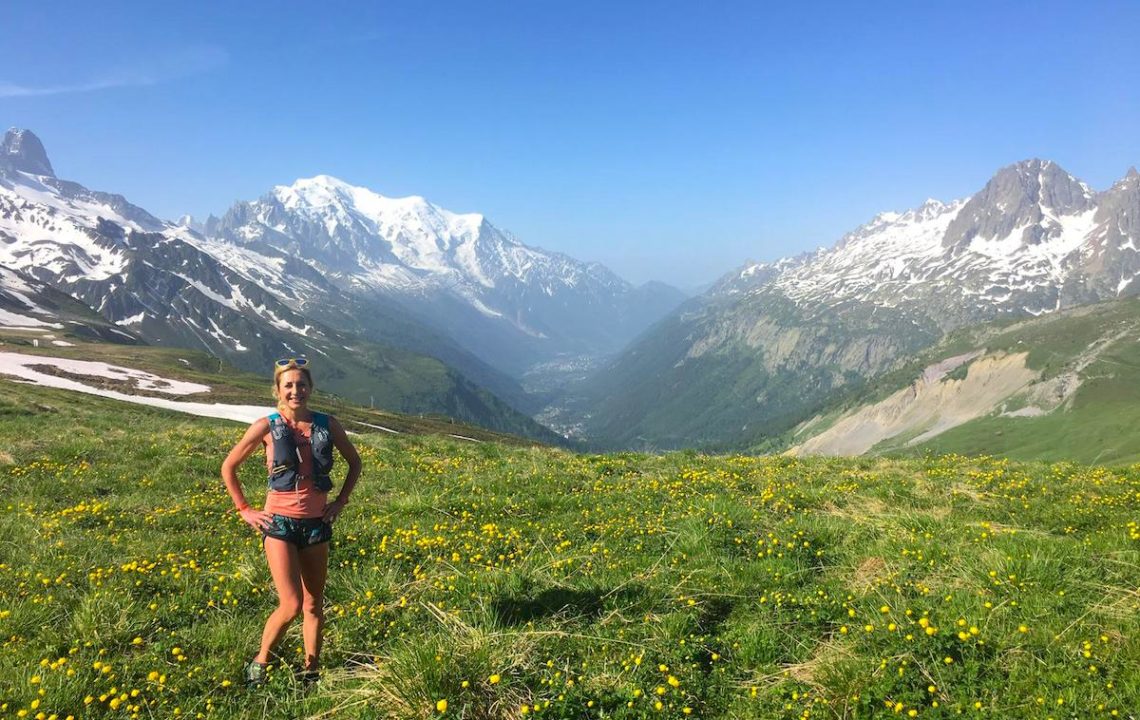 Covid19 has made Nicola Duncan think about what she is missing most in her running life – interestingly it wasn’t the races but her solo multi-day running adventures.

This Easter weekend I had planned to run around the Scottish island of Arran in two days. Then my boyfriend was going to join me for a few days with our dog Senna and my brother’s dog, Swayze, who was meant to be staying with us for a month while my brother was on holiday in Italy.

This obviously didn’t happen but it’s important to realise that the Isle of Arran is going nowhere and the future still holds plenty of opportunity for adventure.

So what exactly is a solo adventure in my eyes and why do I enjoy them so much?

What is a “Nicola solo adventure”?

For me a solo adventure involves picking a trail that will take a few days to cover and where I can find somewhere to stay en-route and just need to run with the bare minimum in my UD running pack. No assistance or company and just me on my own “fending for myself”.

Where have I been on solo adventures?

As someone who is relatively new to the solo adventure world it was only in January 2019 that I flew over to Ireland to cover the Wicklow Way over a few days by myself.

After braving the rural Irish public transport system to get to Clonegal at the southern end of the trail, the plan was to work my way up to the finish at Marlay park in Dublin over three days before jumping on a bus to Dublin airport. Flying back, caked in mud from a fall on the last day, I didn’t feel like running the 11 miles home from Edinburgh airport, but did run there at the start.

One that might be a little bit simpler for someone in the UK, especially those in Scotland, is the first 53 miles of the West Highland Way. The Highland Fling, which is the race over that first half of the WHW, is not easy but normally can be done over two days, or take an extra day on a long weekend. Personally I’ve done this one four times now as the start and finish both have good train connections. An adventure in the Alps

Possibly the most adventurous has been the Tour de Mont Blanc. The mountainous trekking route normally takes hikers 8-14 days but obviously the UTMB race is always finished a lot quicker than that (first male around 20 hours and first female around 24 hours).

Now 160km with 10,000m of climbing is obviously not an adventure for beginners, but it does have a wonderful network of huts to stay in, plenty of fountains on the way round and several towns in which to restock, including Courmayeur at halfway which is a proper town with sport shops, supermarkets and great pizza and ice cream. (If you’re unsure there are plenty of really great guides out there too – Editor).

What have I learned on my adventures?

Best to start this with a big cover-all statement that I’ve learnt absolutely loads on these trips. From highlighting strengths and weaknesses, to working on nutrition, navigation and just reminding me what are some of the best parts of the sport we all enjoy.

My navigation is appalling, but that doesn’t mean it has to stop you adventuring. When I did the Wicklow Way I added on about 30km on my first day as I went the wrong way, happily following signs in the wrong direction, which actually meant I had to change my accommodation plans to avoid running in the dark.

Given I got so lost in broad daylight imagine what might have happened in the dark when the arrows wouldn’t be so obvious. It meant I had two days of 60- 70km running when should have been closer to 40-50km, so making sure you start adventures a little rested is always a good idea. You never know what might happen.

Carry on up the valley

When I did the UTMB route I had one of my biggest “navigational errors” to date when two hours after my start at 6am on day three I somehow ended back at Refuge Bonatti, exactly where I has started. It’s a lovely refuge with some of the best hot chocolate around, but that wasn’t the plan.

I realised an hour in that I had gone wrong but could see where the route was on an app on my phone so “cleverly” saw how to get back on it…without realising I was essentially going backwards doing this. This meant a bigger day than planned on a rather warm day and hitting the big climb of Col de Ferret at a rather “inopportune time” in terms of heat and sun!

I have however learned from these mistakes now and imagine I will never get lost again….or have to “take the scenic route” to get somewhere. (Oh yes? And how have you ensured this Nicola? Maybe the next blog… – Editor). Prepare for the unexpected

The first time adventuring on the West Highland Way I got caught in a blizzard on the second day which wasn’t forecast. Living in Scotland one should expect poor weather, but I’m also an eternal optimist and love my short shorts.

It started off raining…then sleet…then proper blizzard. By the time I got to Tyndrum I was knee deep in snow and making very slow progress. But I always leave lots of time to get to booked trains/planes so I had just enough time to buy some warm dry clothes for the train journey back to Edinburgh.

Add to that I also had managed to bang my head on a bridge (don’t laugh, it’s not often I have to think about banging my head at my height) and had time to get the wound vaguely cleaned up. Lots of blood but according to my rugby playing boyfriend it was actually just a “superficial graze”. Very sympathetic.

Plan your route taking into account where you can get snacks and water if needed.

This was invaluable for the UTMB route recce as there was a heatwave. Robbie, my coach, had indicated where all the water fountains were on the route and most importantly where I would pass through shops to get snacks and the best ice cream. When you travel light you often have to rely on restocking along the way, so this was really vital information.

It was early January for the Wicklow Way recce which meant that lots of places were closed so I needed to stock up on snacks at the villages I stayed at as there were generally zero options en route.

Whenever I do the Fling route I have to take snacks for the two days as there are really no shops en route – just a lovely cafe in Balmaha on the first day where I generally pick up a scone or two! I always stay in Rowardennan where I can get dinner but nowhere to buy snacks.

Plan ahead and ask people who know about the trails you are thinking to adventure on. The running community is fantastic and people will always help you out if they know the route. Always worth packing something as an emergency back-up for fuelling too, at the bottom of your pack just in case.

Pack what you actually need

It feels like I have this down to a fine art. It involves basically packing what would be listed as mandatory kit for most hill/fell races on similar terrain…map, waterproof trousers, waterproof jacket (I generally put in a small windcheater too), foil blanket, headtorch, hat, buff, glove and spare gloves.

In the evening I just wear all my mandatory kit to stay warm. When doing the UTMB route I had a silk bedliner for staying in the refuges. I always pack clean underwear and socks for each day and a t-shirt for bed. Then you just “air” what you wear each day for wearing the next day.

Plenty of snacks make the cut, as does all my make up (priorities, got to look good for the photos), a small bottle of perfume, bank card and cash, a few baby wipes, mini hair brush, phone charger and a mini battery pack. I stay in warm places like hostels/refuges where you generally can air/dry stuff and hire a towel for a shower.

I love that I can head off for a few days with so little and be happy out. If there was anything I’d add it might be a small book for the evenings, but often you’ll find something to read in hostels and mountain huts.

Embrace it when things go wrong

Remember that “it’s character building” and good mental training for events when you have to overcome adversity in training. For example, when I did the Wicklow Way I got stuck in a field with 17 cows (yes I counted) and I managed to escape unscathed. No race problem will ever be as terrifying.

It is frustrating to add on big chunks to routes by getting lost..but it has made me more aware when route finding and I tend to  not make the same navigational error twice.

When you book into somewhere for the night and have a deadline to keep you just have to keep going. This has stood me well in a few ultras when struggling, I just remembered adding 30km onto that day and remind myself how strong I am.

I did have a lie down in the shade under a tree at one point. But it was tough going and ultimately it made me more aware of what I needed to do to get moving again. Cool down, drink more, eat something. These might help kick-start you from a low point in a race too.

The next adventure is hopefully around the corner

I can’t wait for when I can go for another solo adventure again soon – for me these are big highlights in the year.

They are fun, refreshing and good for the soul. You meet lovely people along the way and learn so much, both about yourself and others. My language skills certainly improved doing the UTMB route (three countries) and my geology and geography have also improved a lot as it’s nice to understand the environment you’re running through.

It’s nice to think my navigation had improved over the years, but some might say it still has a little way to go. Day dreaming and planning during COVID-19 lockdown means I now have a big list of solo adventures for when this pandemic is all over – I think I will appreciate them more than ever.

The simple pleasure of going for a Run
Trail Dog: the perfect running partner