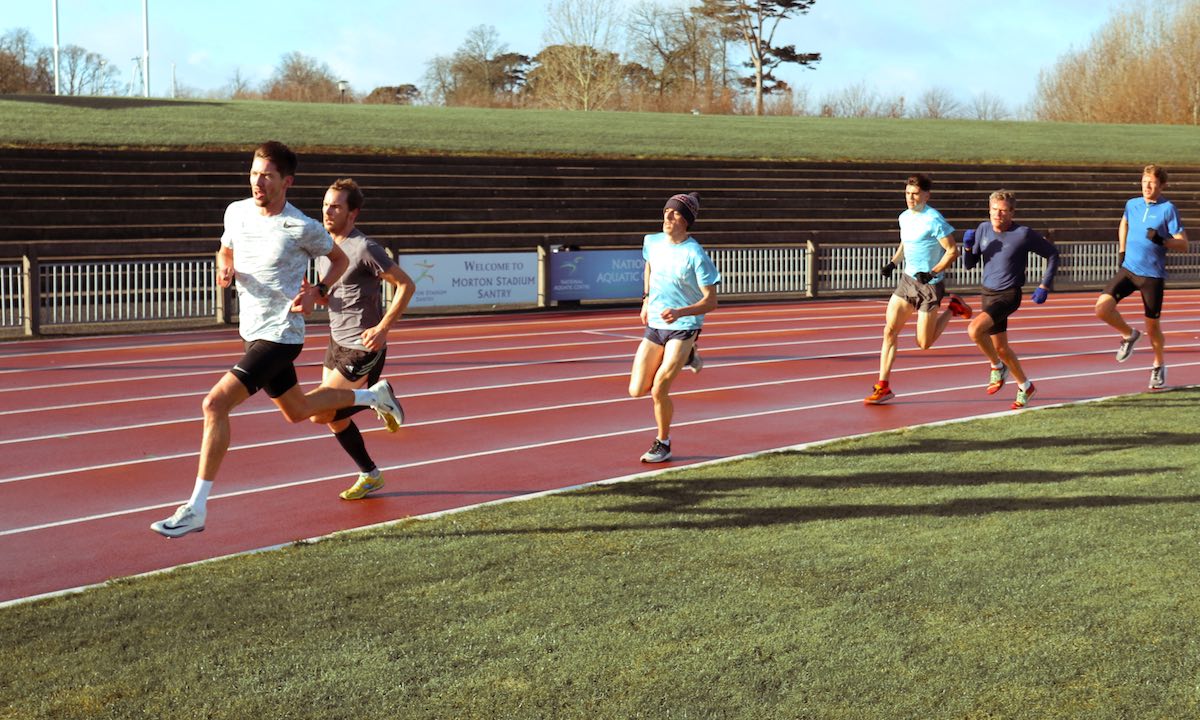 The Dublin Track Club working together for many different goals. Photo: Andrew Coscoran

Following on from Jack Gray’s post last week, the Cambridge & Coleridge athlete talks about getting the athlete to take some ownership of their training.

In addition to promoting the collaborative administration of training programmes, coaches should also encourage athletes to engage with their programmes at the micro-scale i.e. through understanding the purpose of their daily sessions.

Personal experience has shown me that training plans devoid of variation, and input from the athletes that perform them, can struggle to achieve buy-in in the long-term.

To explain, if an athlete’s training is controlled by a coach in an overly regimented pattern, and the reasoning behind training sessions isn’t explained, the act of training can become a process of “getting it done”. To avoid this philosophy taking hold, coaches could provide a basic description of the physiological purpose of each session, and how this relates to the broader programme.

These descriptions can be short and simple, and should be adapted to an athlete’s level of understanding, such as:

“Thursday’s tempo session is designed to increase your lactate threshold. The purpose of this session is to delay the build-up of lactic acid in your legs, and give you the strength to keep pushing towards the end of a race; this will complement the largely anaerobic 3k pace speed work we’re doing on Tuesday.”

Not just about “smashing out the session”

Unfortunately, the “getting it done” mentality has become associated with being a ‘hard man or woman’ and is often lorded (on certain social media sites) as being the bedrock of the golden years of British endurance running.

Although it was acceptable in the 80s, from a coaching perspective, I believe this philosophy can neglect the need to engage the mind as well as the body of the athlete.  For example, in a 10 x 400m session, what should the athlete primarily be thinking about?

Whilst we inevitably look forward to finishing a gruelling session, having the latter mindset (or being reminded of it), I believe, is more conducive to an athlete being able to challenge their perceived limits and capabilities.

To achieve this level of engagement, the onus is also on athletes to actively engage with their training programmes and make the effort to understand the importance of each training element.

Indeed, we live in a time where we demand results immediately, but the foundations of success are built on more than miles in the legs. You, as an athlete, may be willing to spend 10 hours a week pounding the streets, but how many of you spend half an hour thinking about why you are doing it?

Simply put, the more aware the athlete is of their body and their true limits, the more likely they are to fulfil their potential.

As the cliché goes, variety is the spice of life. However, simply rotating sessions predictably is perhaps not ambitious enough; instead, I advocate for smarter training plans that actively aim to destabilise the disciplinary impacts of training, and the quagmires of motivations they can induce.

The first step should be to reduce the monotony of training, both in terms of locality and the form of the session; this is something I need to work on myself [Although that might be a struggle at the moment – Ed.]

Below I have included a few practical examples, some observed at running clubs in the UK, that could be used to keep runners on their toes: We just thought a picture of Jack winning a race would be nice at this point in the article. Look how happy he is! Photo: Stephen Lee

Inevitably the introduction of new practices, such as running odd distances, has the potential to cause controversy, and, of course, they can become normalised too.

Therefore, in order to curb the rigidity and stagnancy of repetitive regulation, coaches could look to continually make small modifications to keep athletes alert and challenged. The movement towards unconventional uses of time and distances will also require monitoring from coaches, both to ensure athletes are not overdoing it, or finding the changes too stressful.

In addition to the benefits outlined above, learning to train dynamically has the potential to change the athlete’s perception of fatigue. Here, a movement away from training sessions that are dictated by markers of time and distance could enable the athlete’s experience of fatigue to become more sensual i.e. the athlete should begin to ‘feel’ when they are approaching exhaustion, rather than being intimidated by hitting a mile marker at a certain pace.

This article does not provide a recipe for a successful coach-athlete dynamic, for which there is none; instead, it advocates for the development of thinking athletes.

Central to developing thinking athletes is moving beyond an understanding of the athlete as a machine that can be controlled by a mathematical formula. To achieve this, I have suggested that coaches avoid using training plans as procedures to simply control and regulate the development of their athletes, and implored athletes to actively engage with their training plans to understand the importance of each training element.

So, I’m asking you to be an active athlete, who is continually learning how to break your constantly expanding barriers, rather than one who is working within their perceived limits.