The Rise and Flight of HOKA 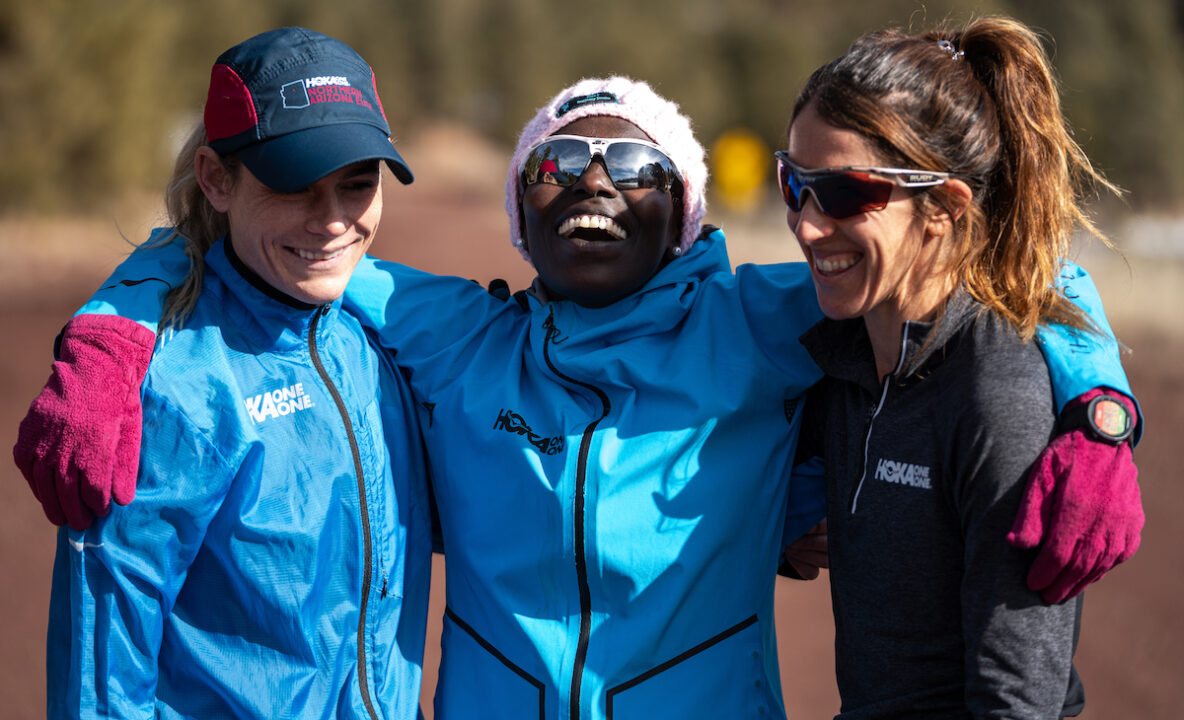 Aliphine Tuliamuk, who recently won the US Olympic Marathon Trials, with team-mates Kellyn Taylor and Steph Bruce. Photos: Provided by Hoka One One, unless stated.

Fast10’s Alex Bampton looks into the relatively new history of his sponsor Hoka One One and asks why they’ve burst onto the running and triathlon scene in recent years.

HOKA ONE ONE (pronounced “ho-kah oh-nay oh-nay”) was co-founded in 2009 by two trail running and gravity sport enthusiasts: Jean-Luc Diard and Nicolas Mermoud.

The pair originally invented shoes for themselves. They were designed to provide a smooth, cushioned ride down the rugged mountain trails of the French alps. Their ethos was that a shoe should maximise a runners’ capacity to maintain stride-to-stride momentum with the goal of maximising efficient and rhythmical footstriking.

To that end, early prototypes were fitted with a wider ‘marshmallow-soft’ cushioned midsole that contained an integrated meta-rocker geometry. These so-called ‘wheels for your feet’ facilitate a smooth, dynamic roll all the way through from initial impact to a final propulsive toe-off. An innovative design feature that is still central to HOKA shoe architecture today.

Barefoot running was booming, so was physiotherapy

At the time an infatuation for minimalist shoes, and even completely barefoot running, was booming. The concept of HOKA, by comparison ‘maximalist’, technology must have seemed audacious. But word got out and HOKA was initially embraced by the ultra-running community.

However, their popularity didn’t stop there. The supportive and yet lightweight nature of HOKA products proved to be successful on pretty much every running surface.

Today HOKA boasts an impressive range of shoes that spans the full spectrum of distance running from road, track and trail with competitive racing and everyday training options within each sub-category.

They’ve even expanded into the lifestyle and hiking markets. But even now as an established brand in running and triathlon circles, the daring innovation is unrelenting – don’t believe me? Check out the recently released Clifton Edge! HOKA ONE ONE is Māori for ‘to fly over the earth’ which goes hand-in-hand with the brand’s tagline ‘Time To Fly.

It is undisputable that athletes are indeed flying in HOKA gear and this is no less evident than at the notorious Ultra-Trail du Mont-Blanc (UTMB) mountain ultramarathon.

An unofficial shoe count showed nearly 30 % of competitors were laced up in HOKA at the 2019 Ultra-Trail World Tour event, which made HOKA the most represented shoe brand worn by participants.

In 2019 HOKA became the official partner of the highly prestigious Western States 100-mile endurance run and the Les Templiers trail race. And HOKA has certainly not forgotten its roots when it comes to their professional teams.

With the likes of UTMB legend Ludovic Pommeret (EMEA) and 50-mile world record holder Jim Walmsley (US) on the roster, the brand looks set to continue dominating the ultra- running discipline for a while to come.

Popularity for the brand has also exploded in the Triathlon world. With HOKA topping the shoe count of finishers in 2017 and 2018 at the IRONMAN Kona World Championships, it’s clear HOKA shoes’ high cushioning-to-weight ratio was valued by competitors off the back of a 2.4 mile swim and 112 mile bike ride.

In 2016 IRONMAN announced HOKA ONE ONE to be the official partners of the IRONMAN North American Series, a multi-year partnership which recently extended to Europe (2018) and Oceania (2019).

Earlier this year HOKA announced an endurance team (EMEA) of no less than 54 professional triathletes which includes the signing of former Olympic champion and 3-time IRONMAN world champion Jan Frodeno of Germany.

I think it’s fair to say that if the turn of the last decade was the minimalist era then the end of the decade marked the beginning of the carbon plate era.

Throughout the last few seasons of controversy and uncertainty surrounding all things carbon, foam and midsole thickness, HOKA has continued doing what it does best: Making shoes that match the needs of its athletes.

Beginning with the Carbon X that saw Jim Walmsley run 4:50:08 for the 50-mile world record all the way through to Aliphine Tuliamuk’s stunning victory at the US Olympic trials in the brand-new Rocket Xs. HOKA has delivered.

The brand’s show of strength on the road is exemplified by the success of the Northern Arizona (NAZ) elite professional team established around 2014 which include multiple-time USA national champions Aliphine Tuliamuk and Stephanie Bruce, as well as British 10,000m starlet Alice Wright.

HOKA also supports the New Jersey New York (NYNY) track club established in 2009 which has a similar mission statement to NAZ but on the track. That is to ‘develop each athlete to compete at the highest levels of the sport’. Whilst the UK doesn’t have the same professional road racing scene as in the States, HOKA has still pledged support for 30 British athletes including 5 athletes which make up 55 % of the 9-strong elite EMEA road team.

Spearheading the squad is our very own Fast10 star and Commonwealth games 10,000m finalist Jenny Nesbitt.

A quick look down the rest of the short-list: Adam Hickey, Claire Duck, Louise Small and Sam Stabler and it’s clear to see HOKA has a penchant for versatile, tough and gritty athletes over the traditional mud and hills as well as the road and track.

In addition to their elite professional programme, HOKA also support a number of other star amateur athletes on their newly founded ‘racer programme’.

With the likes of Fast10’s 13:47/28:49 GB man Jack Gray and Commonwealth games athlete Emma Mitchell on the team, the gap between the elites and top racers is a small one.

Whatever their level, HOKA athletes know they are backed by a brand that really puts its athletes first. You can see this in its Time to campaign, which launched last November and celebrates fans and consumers by putting them front and centre of the story. It will be exciting to see how they develop over the coming months and years in their hands.

As for the brand itself, I wouldn’t like to predict what’s next for HOKA. But if I had to guess with some degree of bias, it would be that HOKA will continue to unapologetically design and produce weird and wonderful shoes and runners will continue to LOVE them.

Trail Dog: the perfect running partner
What the FKT are the Fell Runners Doing?