Off to Costa Rica for a six day 250km race 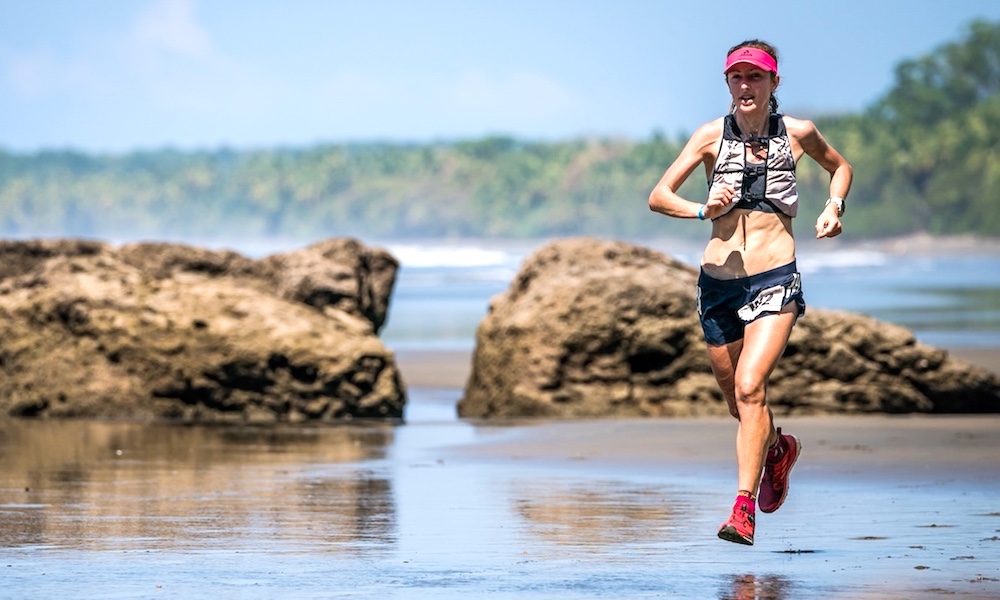 Holly Page escaped the British weather and headed to Central America for an adventure that wasn’t dull at all.

When I was invited to a race in Costa Rica of course I said yes. Who wouldn’t want to wave behind some dreary British landscapes so that they could eat mangoes under the tropical sun?

It was only a few months after agreeing to go that I properly looked at what I’d just signed myself up for. The Coastal Challenge is a six day 250km race, “hotter and harder than Marathon des Sables” I read, “10,000m of climb…”. Ah, bugger.

I’d actually decided to spend the winter months trying to build back some speed. Running six mountain marathons through the jungle would do just the trick… not!

After a two day turnaround at home (including collecting aforementioned Jan article van from Cornwall), I arrived at Manchester airport in the snow, got to the gate to find the flight was delayed… and then cancelled.

A seemingly endless 25-hour wait ensued, including me leaving my belongings in an airport café and sneaking out for a run around a slushy park close to the airport, only to return and find that my suitcase was about to be destroyed as a “security threat”.

Lucky I didn’t go for an extra park loop!

Eventually, I made it to Costa Rica, got a rickety old bus to a little hostel and went for a morning run around the local park.

I even found an athletics track but admittedly cracking out 20 x 1 minute reps on a track at 1,200m after not sleeping for two days was not the highest quality session.

I had a week before the race and decided to head south to run up Cerro Chirripo, Costa Rica’s highest mountain at 3,820m. After finding a downtown electronics shop to fix my laptop so I could work, I got a couple of buses and two hitch-hiking rides to a village in the mountains.

I went straight out for a run when I arrived; it was a little spooky running up through the rainforest to the light of my headtorch with only the deafening noise of insects for company.

The next day I ate a big breakfast to fuel me for the day and then headed up to the summit. It was 21km and a climb of 2,700m, but I knew I’d pass a refuge where most people sleep on the way where I could buy some supplies if I was running out of energy.

Just your average Saturday morning run. 42km with 2700m+ Made it to the top of Costa Rica's highest point Cerro Chirripo (3820m) in time for an afternoon nap. Turned out to be quite a long run with no food (oopsy!) The man in the refuge I'd planned to eat at wouldn't let me buy any biscuits because I wasn't staying there. A kind soul. Although I was spurred on by some motivational quotes on the path, I had no choice but to embrace the bonk albeit I couldn't feel my hands by the end. Healthy. Now lying in bed feeling sorry for my pounding head and rising nausea. Oh happy days. Beautiful part of the world though!! #adidasTERREX

It was a pretty technical path but I was feeling good and pushed up and up until I got to the top though it took longer than I’d thought it might. By that time I was pretty peckish but I found a few biscuit crumbs on the summit which I ate in semi-desperation!

I popped into the refuge on the way down but the man refused to sell me anything because I wasn’t staying there. It turns out nobody really runs up and down in a day so I was quite the oddity. So despite the fact that my hands were going numb (this is my usual sign of bonking!), I plodded on down the remaining 2,000m descent back to the village and bought lots of delicious food!

I was joined the next day by my friend (runner extraordinaire and former Swedish 5,000m record holder) Ida Nilsson. After a few days running around in the mountains we went down to embrace the ridiculous coastal heat.

The Coastal Challenge attracts competitors from all around the world, many of them had previously run Marathon des Sables and were looking for their next challenge. I was told stories of training in heat chambers and six week steam room adaptation… I prepared by standing in a boiling hot hostel room working on a bunk bed for a few days before the race.

I felt rather inadequate! Ida had also come out for the race, and the other ‘elite’ woman was Ragna Debats, the current world trail running champion and current course record holder, so I was in the company of some rather speedy ladies!

The race was extremely varied, lots of fast dirt roads, but also plenty of river sections to negotiate, time spent running on the beach and trekking through the pristine jungle. The heat was incredible and made sleeping for more than a couple of hours each night virtually impossible. Furthermore, we were woken up each morning at 3.00am for breakfast, ready for the 5-5.30am start line. The positive of this was that we could at least have a couple of hours running without the ridiculous sunshine, and we’d usually finished each day well before lunchtime which was a nice feeling. This meant there was plenty of time to put up the tent, have several cold showers, pop some blisters and eat excellent food before the next stage.

I won’t go into detail about every stage, but suffice to say I was extremely happy with how the race went – second female and fifth overall.

I genuinely never thought I’d be able to finish it without getting injured, but I actually felt really strong and finished each stage with more left in the tank. I broke the female record each day but Ida broke it by more, winning two of the stages outright!

But I did manage to take stage wins on day four and day six which was pretty cool and made me question how I could have done had I pushed a bit harder in the earlier stages (in which I was also plagued with horrible blisters and stomach upset). I learnt a lot from the experience, that maybe I am stronger than I think and that stage racing is actually pretty fun. Maybe the Marathon des Sables can’t be THAT hard if this event was deemed to be worse!?

After the race, everyone headed back up to San Jose but as I still had 10 days left before my flight, I decided I should get a boat, five buses and try my hitch-hiking luck and head down to Panama.

I had some ‘active recovery’ by running up its highest volcano, circumnavigating a pathless Caribbean island on a mountain bike, going on some very unplanned jungle adventures (e.g. finding myself in thigh deep swamps and head high grasses), eating lots of papayas and occasionally relaxing and reading my book in a hammock.

Not a shabby February at all!

A ‘fun’ month of running, van buying and travelling
Even a little stone can have a big impact