Japan on two wheels, snowy passes and a broken foot 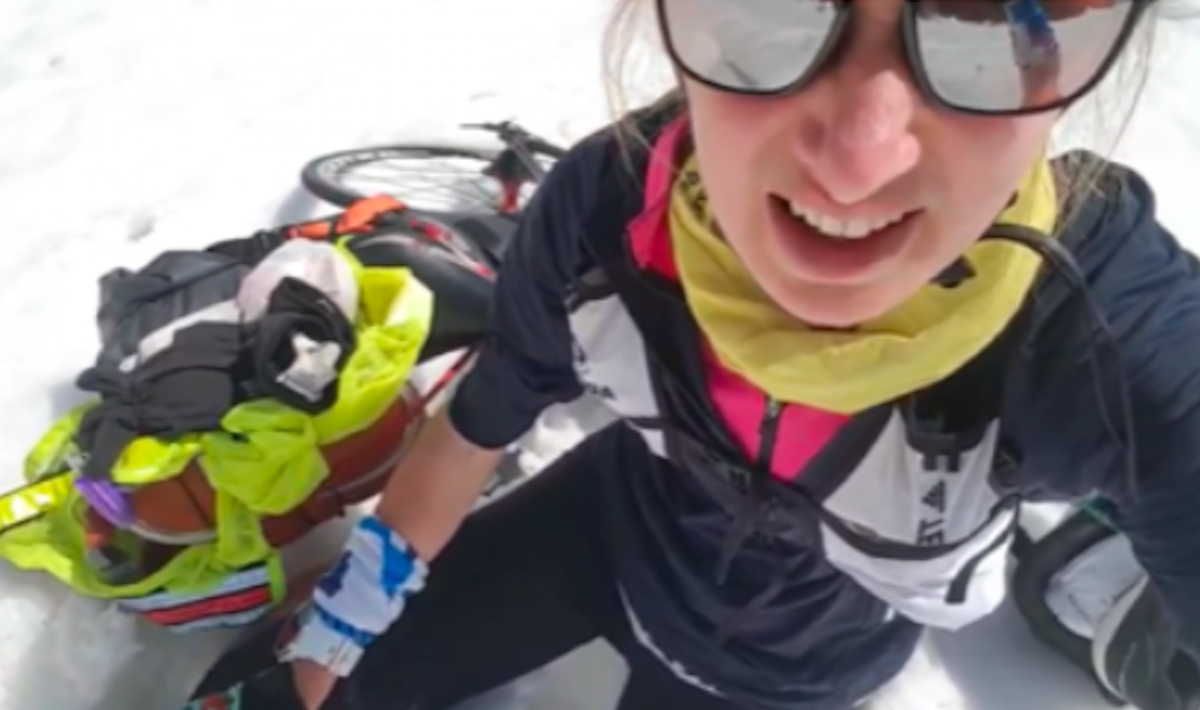 In April’s Fast10 blog Holly Page shares a Japanese adventure and the news no runner wants to hear.

Ironically my April Fast Running contribution does not include any fast running. Or indeed any running at all. I’m writing this whilst I sit in a hospital in Germany (thanks for the support Adidas Terrex!), waiting for my second MRI of the month. That’s not how I had intended my April to pan out, but hey ho, sometimes things don’t go to plan.

On 1the first of April I headed off to Japan for the first skyrace of the World Series. After which I would travel to the mountains of Western China for the second one which I’d actually won last year and knew I wanted to return to.

Other than the sore foot (see March article) I was feeling really fit and strong. Although I’m not one for outward self-confidence when it comes to running, I guess I genuinely felt like I could do pretty well at the races.

I’d not been to Japan before so decided to spend the first 10 days cycling tramping around. My plan had been to get a running session in each morning before cycling but given how sore my foot was I decided it would be wise to give it “total rest” and just stick to cycling. I adapted my road bike by attaching my sleeping bag with bungees to the handlebars and then bought two bike packing bags for the frame and seatpost. No space for a tent, but I would make do with a bivvy bag and warm thoughts.

I came up with a logistics masterplan and arranged with a Warmshowers host (a fantastic community of people) in Osaka to leave my race bag with him whilst I pedalled around, and then swap the bike for the race bag before I travelled to the race.

“Where are you heading” asked Yoshi. “No idea”… I was just going to make it up as I went along. Making it up as I went along

The first day could have been better; I tried and failed to get an MRI on my foot at three different hospitals, then spent the rest of the day cycling in the freezing rain until it got dark. Eventually I found a picnic shelter outside a little restaurant and decided to spend the night there.

I thought I’d sit in the restaurant trying to warm up and dry out until somebody came to bring me the bill / tell me it was time to leave and battle a night freezing in the rain outside.

After a little while the restaurant owner asked if I’d like to sleep there. I didn’t take much persuading and made up my bed on the floor. After a long flight and an afternoon of miserable cycling I was pretty exhausted and fell asleep instantly… only to be awoken 5 minutes later by the lady inviting me to join her and her extended family for dinner; they’d even wheeled out the 93-year-old grandmother to meet me!

Jokes are an international language

Honestly the last thing I wanted to do was spend the night being sociable, communicating through Google Translate, but I thought I ought to. After all, smiling and laughing goes a long way, and it is very possible to make jokes even when you can’t speak the same language. They lived in a basic house with the restaurant attached, they weren’t particularly wealthy and had lived there for generation after generation, but they were so kind and welcoming.

I’d been told that Japan was a safe country and it certainly seemed that way. I had no problems sleeping in public parks and temples and also had a few nights with couchsurfing / warmshowers hosts which was a great way to get an insight into Japanese life.

When I got too smelly, I would go to the public baths (called an “onsen”) and flounder around in the steaming water with the local women. Unfortunately my lack of Japanese meant that I couldn’t distinguish between the symbols for “Male” and “Female” so had quite a shock when I opened the door to a large room of naked Japanese men enjoying the bubbles.

An adventurous soul on the bike and the karaoke

I love to travel by bike; I find it to be a great way to see somewhere- a compromise between the slow pace of walking or running and the too quick pace of a car. There’s a real sense of freedom, having everything you need strapped to your bike, no clue where you will sleep that night, contrasting beautifully quiet closed roads (I carried my bike over a lot of No Entry barriers!) with “hold on tight and hope the lorries see you” tunnels and I even had a joyous day where I cycled 100miles on a motorway. That was really grim.

In and amongst the cycling, I tried all sorts of food including matcha tea icecream sandwiches, icecream with an onsen egg on it and baby squid for breakfast. I dressed as a tiger at a baseball game and sang karaoke like a true Japanese woman.

One “no entry” barrier too far

One day in particular turned into a bit of an adventure. A bit too much of an adventure. Having woken up to my frozen sleeping bag outside a temple, I’d got up early and decided to cycle 45km up and over a pass to a town for breakfast. I clambered over yet another road closed barrier and started cycling up the hill, big snow walls on either side of me where it had been cleared from the road. I eventually came across the huge diggers which were making the road ready for spring. The guys gestured at me to go back down. But after a few seconds of deliberation I gestured back that I would continue on.

I somehow climbed up and onto the snow wall carrying my bike but walking was so much more difficult than I’d thought. With every step I was sinking thigh deep into the snow. It was like running an ultra race except that with an ultra race at least you know how far it is until the end. I had no idea how far it was. My map said 14km up and over the pass but I was moving at less than 1km / hour. This was also pre-breakfast and all I had with me was the remains of a giant lettuce I’d bought the night before. Delicious and nutritious.

After a few hours slogging, I came across two guys carrying guns. We couldn’t understand each other but they were quite surprised to see a random Western girl walking / sinking her way without snow shoes over the pass…carrying a ladened bike on her back. They were the only other signs of life, and once they’d gone there were no more footprints and I was very much alone.

Nothing worth bear-ing in mind

I remembered the signs I’d seen for bears a few days previously and it dawned on me that it was prime bear time as they came out of hibernation. Hey ho, hopefully bears don’t like lettuce [or mountain runner – Editor]. The “road” had been cut into the side of the steep mountain meaning that I had to negotiate various points where avalanches had come down.

I was somewhat uneasy about the whole thing but there wasn’t much I could do so I just got on with it, there’s no point sitting around feeling sorry for your predicament. It’s not going to help. I fully expected to have to spend the night up there trudging through the snow, warding off bears and avalanches and bonking big time, but miraculously, the snow came to an end after five hours.

It took me more than two weeks to get the feeling back in my toes, I’d got ice burn up my legs, and my back and neck were pretty beaten up from bike carrying.

It was pouring with rain and I still had a really long way to go to get to my Warmshowers host that evening so I ended up persuading a bus driver to let me get on. My host happened to live next to an MRI centre, so I went the next day to get my foot checked out. “FRACTURE”. Oh great. I’d been told it was probably just bruised, or tissue damage. But a fracture was a whole new ball game.

It wasn’t the best news to receive only one week into a six week trip. So I annulled my racing plans in Japan and China and mulled over what to do next.

It’s really not the end of the world

Two weeks later and I’m back in Europe. I’ve been told that I need another two weeks of rest before I can start to run again. So that will have been two months off altogether. I’ve given up my place on the GB team for the upcoming Trail World Champs and not sure when my first race back will be but we shall see.

Obviously it’s extremely frustrating to have put in so much work for it to be wasted right at the start of the season from one freak incident, but sport can be cruel, and ultimately it’s just running, and I’m very fortunate to have so many other opportunities.

Flying back via 19 hours wandering around poverty stricken Manila puts everything into perspective. Yet another example of the lottery of birth which I’ve seen so much of over the years and which always makes me appreciate who I am and the privilege of having choices in life. Yes, woe is me, I have a fractured foot. But it’s really not the end of the world.