How many races can you really do in one month? 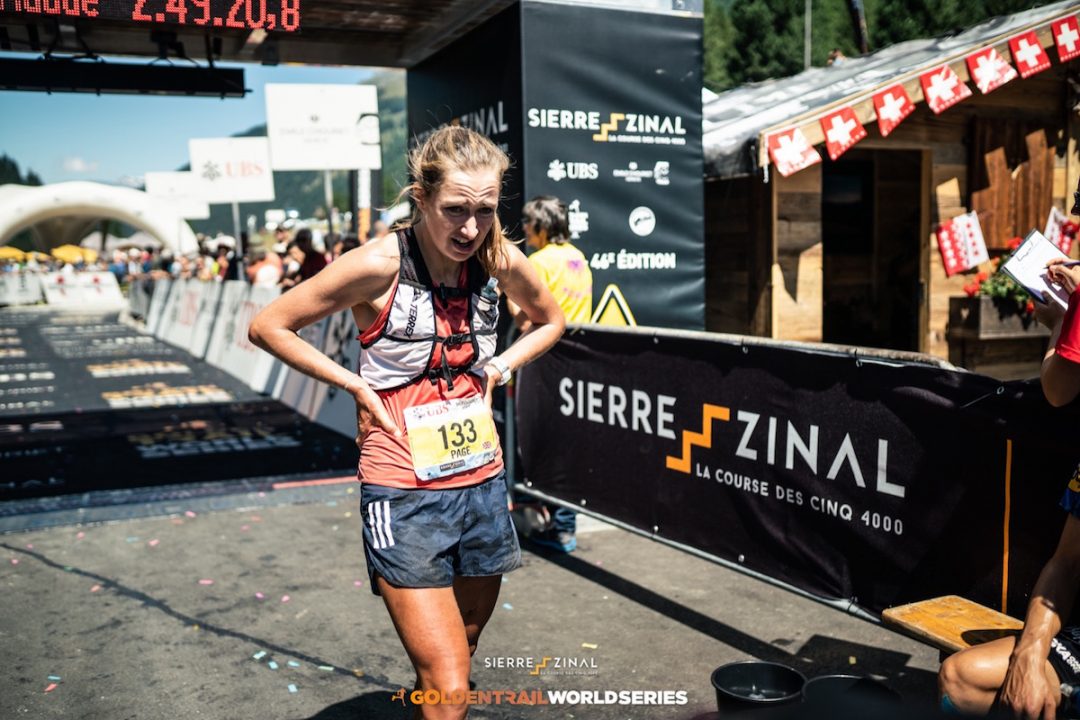 You’ll never guess what Holly Page has been up to…? Lots of racing all around Europe and going longer than ever before at the 100km CCC race at the UTMB festival.

I do seem to recall ending my last article saying that I was about to run a race called Sierre Zinal in Switzerland, for which I had done zero preparation, other than racing for 8 hours the previous weekend (not advisable!).

It’s a very prestigious race in the mountain running community and always attracts a very strong field of elite athletes from around the world. I guess the race could be described as a double Vertical Kilometre followed by a fast half marathon…

My legs were what can only be described as exhausted going into the race but I had nothing to lose, and it’s amazing what the power of mental strength can do to overcome physical inability! I somehow seemed to get stronger and stronger as the race progressed and in the end finished five minutes faster than I had last year, eighth in the most competitive field the race has ever seen after my cramping calves prevented me from catching seventh place by four seconds!

After the race I returned to the more affordable land of Italy and enjoyed a wonderful week competing in every race going – three in four days. I seemed to become a bit of a local celebrity which was fun and it certainly gave a boost to my wine and cheese supplies.

My parents had come out in their campervan as well and I even managed to persuade them to partake in one of the races! Next on the schedule was the Matterhorn Extreme Skyrace in Zermatt. As a considerable chunk of the race was going to be spent above 3,000m I decided to have a few nights up on the Simplon Pass at 2,000m – I rigged up my hammock and enjoyed a few relaxing days, letting my legs recover before the big race to come.

I even discovered that there were showers in the public toilets at the famous Simplon Pass Hospice -huge bonus when you’re living in a van! Back from a freezing cold run in the rain, I went into the hospice to get warm and clean, but as I was putting my shoes on to leave a cleaning lady came into the toilets.

“Are you staying here?”,

“Well you are not allowed to shower, are you also stealing food?”

“No, of course not, I was just cold and dirty and wanted a hot shower”

“This is not a public place, YOU CANNOT SHOWER!”

“Ok I’m really sorry I didn’t realise, I thought it was a place to welcome weary travellers, I won’t shower here again”…

I went to leave the bathroom, but not before the lady ran to the door, slammed it in my face, and proceeded to lock me in. It was quite a ridiculous situation to be in. I’d effectively been taken prisoner in the toilets by the cleaning lady. I went over to the window to see if I could climb out of it but it was far too big a drop down to ground level. So I just started tapping on the door. Tap tap tap. Tap tap tap.

“A person…” I responded (what else was I supposed to say, introduce myself!?) “The cleaning lady locked me in here!”

He said no more so I presumed he had disappeared. I continued my tap tap tapping. After what seemed like a very long time, there was a key in the lock and the door opened. There was the cleaning lady looking extremely smug with herself.

“Why did you lock me in, are you a child?” I asked her, quite calmly.

“At least I didn’t kick you!” she retorted, laughing menacingly.

Although I would have loved to, I didn’t retaliate at all and just walked off, still somewhat incredulous as to what had just happened. I guess some people take power trips to the extreme. Whatever floats your boat. Anyway, a word of warning…. Never take a shower on the Simplon Pass!

Anyway, I ultimately made it to Zermatt; it is a bit of a crazy place which seems to be mostly filled with people who like to look at mountains rather than being up them. The race itself really was quite extreme – vertical scree downhills, a glacier to cross, and sadly I ended up coming down in a helicopter after hitting my head on a rock as I scrambled up the first climb.

Having never dropped out of a race before, despite the blood coming from my head, I was intrigued to see what the rest of the course was like so I decided to continue and thought I felt ok.

Unfortunately, those feelings of being “ok” turned to being “not ok” and I started to feel really dizzy and sick. It was a huge effort to get to the first aid station at 3,200m, even just walking very slowly.

I said to the guys at the aid station that I’d carry on, even though my dazed body was telling me to stop. With the most technical part of the race still to come, and my condition deteriorating significantly, I ended up being bundled into a helicopter to get down to the valley as quickly as possible.

Most people enjoy their expensive helicopter rides with views of the Matterhorn – I didn’t even look out of the window as I had my head in a sick bag – how silly. Moving on with a helmet

Anyway, I had a couple of days feeling the concussive after effects of the rock encounter, but on the third day I decided I was well enough to join a friend climbing the Aiguille du Tour – an eight hour day including a long glacier traverse and scramble was obviously a great way to test my physical state – but at least I was wearing a helmet and we had a wonderful day out!

I was heading to Chamonix to stay with the Adidas Terrex Team for the week of the UTMB, “the world summit of trail running”.

This would be the fourth year I would be there that week supporting but not actually racing. Given that my legs felt reasonably fresh after missing most of the descent in the Zermatt race, and my mountaineering trip the previous day showed I seemed to be over the concussion, I mulled over whether to toe the startline of the CCC race, 101 km with 6,100m climb.

I had entered back in December as I had enough points to qualify for a free elite entry so thought I may as well have it as an option though had never really contemplated doing it.

A step into the unknown

Most people said it was a ridiculous idea; I’d done no training for it, it would ruin the rest of my season, I would end up broken…. But a couple of people (including myself!) thought I should give it a go. So after a long and painful decision making process, I decided to do it. Yes I could prepare properly and do it well the next year, but who knows what would happen the next year – I might not have any legs!

The kit list for the race is notoriously contrived and I spent the three days before the race running around Chamonix like a headless chicken collecting bits of kit from people, buying bandages, spare batteries for the two headtorches we had to carry, do two ITRA Quartz blood tests, signing autographs on large posters of my face (why!?), and then looking at where on earth the route went.

The race was Friday and by Wednesday night I seemed to have some kind of stomach upset. I didn’t think anything of it and thought it would pass before the race. Sadly it didn’t and I spent the 30mins before the race holed up in a toilet [There’s a bit of a theme for this blog – Ed.] I’d commandeered in a restaurant in Courmayeur.

No need to go into a long race description, other than it consisted of 80km of rather intense gastrointestinal distress, so much so that I could hardly run at all from eight kilometres in; I had a few moments of feeling better, but mostly it was a pretty grim 11 hours of trudging / baring my arse to passing runners as I squatted by the trails. I kept telling myself the stomach situation would improve but it didn’t.

Feeling good when it got dark

I finally started to feel good once it got dark, and having run so much of the race with no competitive ambitions, as soon as I put my headtorch on I felt good; I could finally run normally and managed to overtake lots of people on the last 20km section; I felt like I’d only just started running, it was such a wonderful feeling.

I had so much energy at the end that I even did a crazy dance on the finish line. I wouldn’t call my experience a race, as I never felt that I was racing anyone, it was very much myself against the course (and my intestines) and having told myself pre-race that I would only drop out because of a “mechanical” e.g. knee pain etc, stomach problems fit into that category so I was pretty determined to finish. Since that not so wonderful experience I’ve been having a fairly terrible few days and I’ve finally resigned myself to seeing a doctor today as it’s getting a bit ridiculous. But I’ve now had my first taste of running 100km; it didn’t seem too bad, my legs held up ok and I’d definitely do another one, ideally with more optimal stomach conditions.

What a peculiar hobby this is

It did however occur to me as I was shovelling pasta and sweet potato into my mouth with my hands at one of the aid stations what a ridiculous sport this is.

When we look at it in the greater context of the world – here we are, so privileged that we choose to force ourselves to run ridiculously long distances for “pleasure” – we pay to do this!?; depriving ourselves of sleep, shovelling as much sugar into our mouths as our bodies can handle and expelling bodily fluids left right and centre when we can’t… it’s all a bit silly really!

I’m not saying that we should stop doing it, but I think it’s important to remember that it’s all a choice, a game we’ve chosen to play, and when we feel “terrible”, we are pretty damn lucky to be in a situation where our greatest suffering is entirely self-inflicted.

Getting back to racing
On through the storm