When your first marathon doesn’t quite go to plan 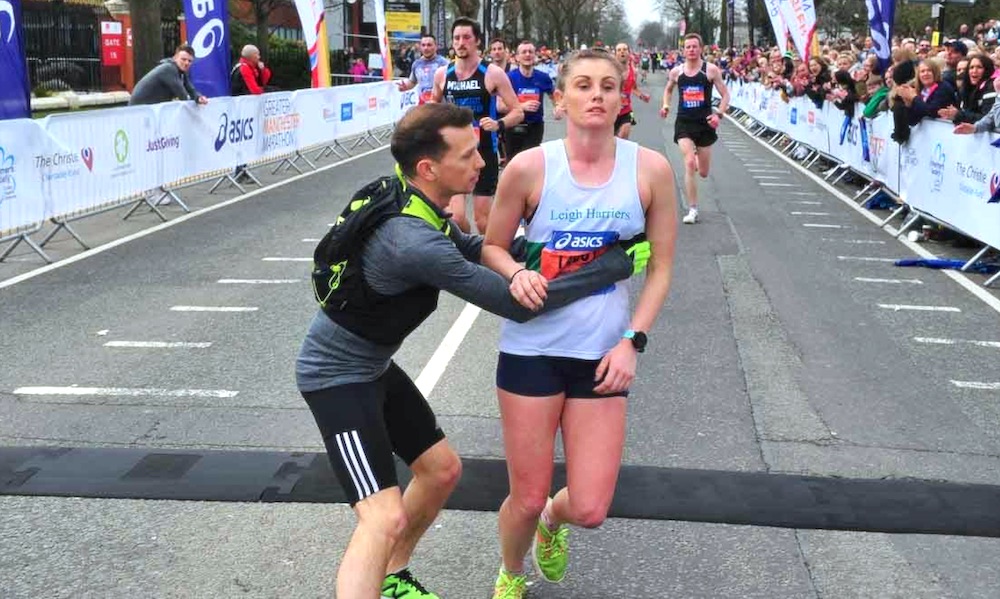 Laura Riches reflects on her unforgiving marathon debut in Manchester and the important lessons learnt.

In 2004, I stood on the sidelines of the Mall in London as I watched my dad crawl on his hands and knees, fall every time he stood, and eventually helped over the finish line by officials.

He vowed that day to never run another marathon and that he hasn’t. I, however, aged about 11 and three quarters that day, vowed to do a marathon.

That desire was further cemented each year by the valuable experience gained during the mini-marathon and watching those super fast and crazy humans run 26.2 miles.

So I guess I ran that marathon and it wasn’t pretty. But I finished it and I ran faster than my dad taking the last family record (apart from my mums 100ms 12.4, which I’ll never be getting), and I didn’t look as bad as my dad, despite what others may try to dispute (as yes I looked a mess)!

I thought I would just write down a few thoughts about what I would do differently if I ever ran another marathon again, which I will not be doing, despite having the qualification time for a championship entry at London teasing me daily.

I think for your first marathon, it really does not matter if you have the perfect preparation, or if you think you are as fit as you have ever been. After my experience, I personally think you are never really prepared for what a marathon truly entails.

Despite what they said about making sure you are ready, I was convinced I was, it turns out I clearly wasn’t. Finishing a marathon basically being held up before falling to the floor, tells me that for sure. Something I did in my preparation wasn’t right.

I think the most important thing for me post marathon and for anyone who runs their first, is to finish the race and think about what happened, what can be done differently, and how did you feel.

It took me over a week before I could even bear to look at my splits, look at the photos (which were hilarious, I should add), or write down my thought on it and what went wrong. But once I did I realised a few things.

1) The marathon is a completely different ball game to anything you will have done before. You could be an ok 10k or cross country runner who believes they can just up their mileage and run a marathon, but no, it’s not that easy.

2) I am not a 3.08 marathon runner, but I guess that’s where I was at on the day, and preparation is far more than just getting one or two extra-long runs in.

3) Running will never feel so hard as it does at mile 20, this is something I was told beforehand, and yes, I didn’t believe it, but oh my was it true.

4) Starting to train for a marathon three months before, because you already think you run decent miles anyway, isn’t a wise thing to do. The transition in racing distance is hell, trust me, actual hell, when you don’t prepare well enough that is.

5) Fuelling during the marathon is key, and even if you think you don’t quite need it, take it.

6) If you don’t feel well and lose your fuel (by being sick), put it back in even if you don’t think you can face it.

7) Being able to run under an eight-minute mile for the two to three weeks following the marathon seems impossible if you don’t do it right on race day.

I’ve been asked more times than I can count, what is my plan now I’ve finished the marathon? I guess I’m not really sure.

The Beer Mile is probably the next big event, with my flights to Vancouver now booked, but not sure training for that is a good idea, especially when it’s in August, and I can’t drink!

The track season is looming, rugby season is almost over, and I’m currently struggling to run faster than eight-minute miling, but that could be due to back to back rugby games, and not letting my body recover (something we all know I find difficult).

But making the Lancashire team for the first time in six years after a long break from the sport, was worth it.

So I guess I’ll sit down and figure that out at some point soon, but for now I’ll put my multi-events head and legs on ready for the Northern Track and Field League, where I’ll be doing the distance and hurdle double, with a few relays thrown in, what more do you want.

Here’s hoping my legs will move, and I won’t fall over, as I’m sure Will (who helped me at the end of the marathon) doesn’t want to follow me around for the rest of my life catching me at the end of races!

Until next time, when I’ve sorted my life out!

Laura Riches features in the ‘Fast 10: class of 2018’ and will share her running journey every month. You can read Laura’s previous posts here and further information about the ‘class of 2018’ can be found here.

Am I addicted to running?
What’s life like as a student-athlete in America?