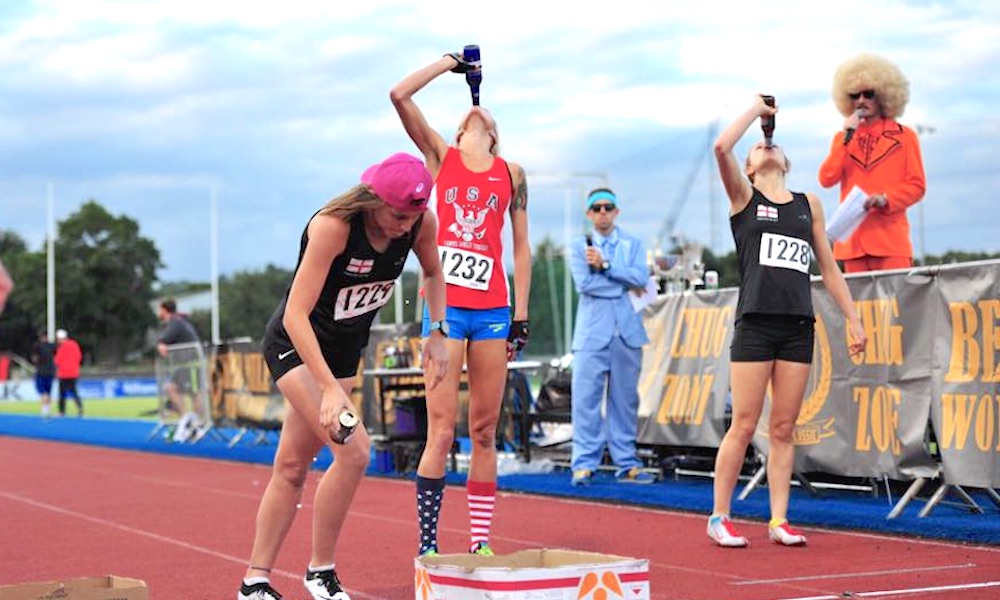 Laura Riches is in Vancouver to run and drink beer and hopes to take gold if she doesn’t throw up this year.

I’m about to take on my third Beer Mile World Classic, and this time I actually planned on attending the event, rather than just happening to be in the right – or possibly wrong place – at the wrong time!

This year’s event takes place today (August 11) in Vancouver, Canada and it would have been silly not to take up the offer to attend the race in a great city!

So what is the Beer Mile?

For those of you who don’t know, it’s just like any other track race, it draws in runners of all standards and experiences, all of whom are there for a good time, or a new experience.

However, there is one little difference in the official Beer Mile. Each lap starts with a can or bottle of beer, 355ml to be precise, so just a bit bigger than an average Heineken, often hard to find in the UK.

You must chug, or sup, depending on your drinking ability (mine being the latter) and then, you must run, as fast as you physically can around the 400m track, before having your second beer and another lap. The process continues until each athlete has finished all four beers and ran all four laps without being sick.

Unlike the Chunder Mile, which is probably more well known to British readers, it is forbidden to throw up. Something which I fell foul to in last year’s event. Going into the final lap, a fellow athlete from the USA threw up and the rest is history. If you throw up at any point during the race you are faced with a penalty lap. This does not include another beer which comes as pleasant news to all who fall foul to the rule.

– The beers must be drunk within the chugging area, which is around five metres from the start/finish.
– No beer should be left in the bottles or cans, as this will be measured at the end of the event.
– All drinks must be opened during the race and not before you start.
– Any tipping or pouring of the beer over oneself will result in disqualification.

The men’s world record stands at an outstanding 4:33 set by Canadian 800m runner Corey Bellemore, and the women’s is a respectable 6:17 set by Liz Herndon.

This year’s event is set to be another spectacular event just like the event held at Allianz Park in August 2017, with athletes from across the world attending, including; America, Canada, Sweden, Australia, England and many more.

There are rumours of a sub six minute beer mile on the women’s side, so hopefully my lack of both running and drinking shape won’t put me off the pace too much and I can try to go one better than my second place finish to British runner Bryony Pearce in last year’s event!

In the men’s race, it’s going to be pretty hot at the front, with GB’s Dale Clutterbuck and Ben Coldray putting in a fair bit of graft on the drinking front.

So for anyone wishing to watch the Beer Mile World Classic it will be streamed live on FloTrack, I think… and more race details and results can be found here.

But I’ll be sure to update you on the madness, which I’m sure will come when 80 international athletes from all over the world descend on Vancouver.

Laura Riches features in the ‘Fast 10: class of 2018’ and over the course of the year will share her running journey. You can read Laura’s previous posts here and further information about the ‘class of 2018’ can be found here.

What is athletics without volunteers?
Laura Riches on gender equality in sport