Progress: back to racing and looking after myself 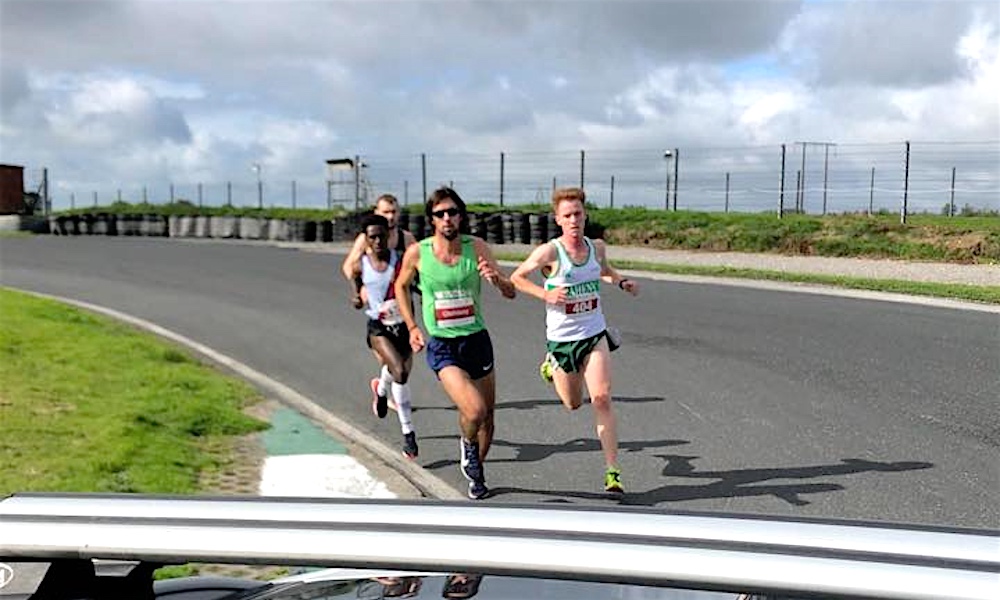 Kevin Dooney made a welcome return to racing this month and is happy to report progress in his mental well-being.

The summer may well and truly have ended, weather warnings for wind are back in effect and it is only a matter of time before we move from summer pastures to our group’s aptly named ‘winter loop’.

At least I managed to get myself back to racing, with some feel of a summer road race, before the winter set in – even if it was an overcast Sunday morning on a windswept motor racing circuit.

My main goal in return to racing was simple, go out hard with the leaders, hang on and see what happens. All things considered, it went well as I took second place after sheltering the eventual winner from the wind for close to two miles.

A change of tactics is probably needed for the next race, but I made myself hurt again which was my purpose that day. The mixed Raheny team took a valiant second place finish behind a team made up of the pre-race first and second favourite on the men’s and women’s side. Realistically we never stood a chance given the rules at play. I can just hope that road races moving away from classic club teams to anybody putting together a team for themselves doesn’t become a trend.

A break from running

The immediate post-race recovery was put on the back burner in the name of football. With the first race taken care of, I headed almost straight to the airport to fly to Poland and watch Ireland play a friendly in Wroclaw. Thankfully an international football break in early September every year gives me a chance to get away with my friends and see some different parts of Europe.

Three days of leading the exact opposite life of an athlete is not exactly sustainable, but being able to switch off entirely and take a break from thinking about running is necessary. I fooled myself into thinking I might get some runs done over there. My shoes never emerged from the bottom of my bag.

No long-term damage was done while away and normal service of training resumed when I got back. In other stages of my career I would’ve been very stressed out about taking three days off for a holiday, even days I wouldn’t be training hard anyway.

Accepting that in general, my training has been going well in the past months means I can allow myself a little respite and kindness when it’s appropriate.

As I’ve come through the past few years I’ve learnt that things won’t be perfect, things will come up, that means I have to be a little flexible. While previously slight changes in routine could play with my mental health, a big part of my journey has been learning to be less black and white in my thinking.

I’m progressing with my mental health

It is not always a winning battle but the general progression is going well. For the first time in some while, I can generally say I’m happy with where my mental health is at.

That isn’t to say I don’t have bad days, but for me, the largest victory is in smoothing out my mood graph and understanding when it is I feel down and being able to deal with it accordingly.

Opening up about this on Fast Running was a big step for me in actually admitting that these are things that I needed to address. In the past, I would hide any efforts to work on my mental health because that would be admitting to having a problem to begin with.

Now I have no fear of being fully open about going to see a counsellor, working with a sports psychologist, meditating daily (or as close to daily as I can). Journaling is the next tool I need to add to my routine. It is strange to think that I meticulously log my physical health on a daily basis but make no effort to keep a better tab on my mental health.

This blog gives me a great opportunity to write once a month about where I’m at but very often proves a more high-level exercise rather than examining the day to day feelings.

It is nice to have some time now to reflect on these things when the going is good. Having a race under my belt means I can fully move on from the spring and summer gone by. There is also time until I get fully back to the cross country so I can enjoy my training now and feel some of the old fitness returning.

Up next I have got the Rathfarnham 5k on Sunday (September 30), which is generally a good fast race and a chance to open the legs out. After that, I am very fortunate to be taking part in the Izumo Ekiden in Japan on October 8, so I should at least be guaranteed material for the October blog already.

It is great to feel a sense of optimism about where I am at and not just in a running sense. There is plenty to look forward in the coming weeks and months but for now, I can just happily live in the current day.

RELATED: Mental health: If I spark one conversation it was worth sharing

Trail Dog: Lessons on the journey back from injury
#TRAINBRAVE: New campaign launched to tackle eating disorders in sport