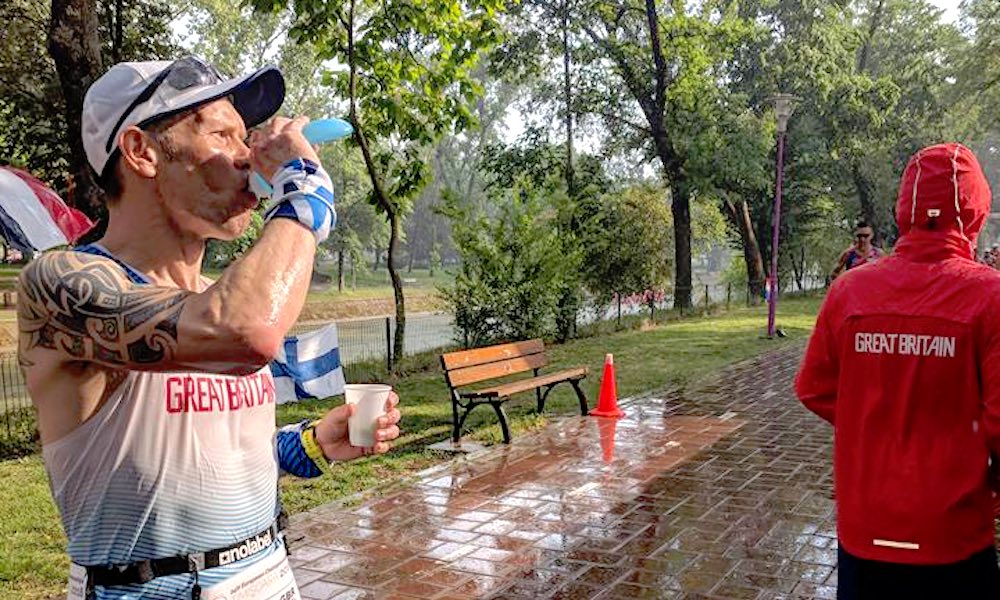 James Stewart reflects on his roller-coaster ride at the 24-hour European Championships and the resulting team medals.

Across the river Bega, a bar erupts in a cheer. It is the kind of roar that tells you something special has just happened. The commentator is screaming in Romanian and I can see the big screens clearly, Gareth Bale has just scored a wonder goal in the Champions League final.

Meanwhile, I am emptying my belly over the fence being sick once again. Even so, I wouldn’t have swapped a seat at the bar for the fence I am hunched over in the Ion Creanga park in Timisoara for all the tea in China at that moment.

This was the International Association of Ultrarunners (IAU) 24-hour European Championships, the 22nd edition of the event. The culmination of months of training and sacrifice; of early mornings, beer abstinence, many pairs of trainers, of tubs of vaseline and more malt loaves than I care to count.

I had the honour of pulling on a GB vest for the second time. This followed a disappointing debut in Belfast at last year’s World Championships where I dropped out with injury.

Gah! The sickness! Was lightening about to strike twice again? Not if I had anything to do with it. If I was to measure my race on the pure “plan” and “outcome” numbers alone I’d be writing this with more than a twinge of disappointment.

The short-story is Great Britain took a podium in both the men’s and women’s races. Team silver and bronze respectively. But as we all know thanks to Jack Bauer, 24 hours is a long time and so much can happen! And it did.

I went into this race in the best condition I’d ever been in. Not just mentally but physically. Numbers had borne that out in both training and performance testing. Coach Paul Giblin has worked with me for over four years now and some tweaks and changes in this period had really got me in the best place possible. Of course, I’d need luck to perform to my potential.

The temperatures were as feared with peaks of 30 degrees. That meant plans were quickly discarded and a need to be sensible early on needed. “Apply once” P20 sunscreen was applied multiple times to deal with the heavy sweat, constant ice packs and sponging being used to keep the core temps down. The race started at 10am and by noon the place was sweltering. Only a tropical thunderstorm around 6pm helped get the heat down to a more sensible level. Despite this, I’d run pretty well. I was way down the field and feeling good. Just ticking off the kilometres and saving energy. I’d need to look up my numbers but I hovered around 30th place for the first 12 hours. Just where you’d want to be.

But… a familiar foe was to surface. Ironically as the temperature dropped I started to feel ill. This can easily happen when you are working at such intensity and trying to fuel. You cannot function without carbs, but there is a balance to be struck with what you take in and what you can use. Without getting too graphic I was quickly recycling anything in my stomach up and out. This causes multiple issues; no fuel, dismay, severe energy drops, mental bonks to name a few.

I’d planned to push once the temperature dropped but instead I was struggling to stay afloat. The loop was 1.236km and instead of just under seven minute laps I was throwing down 10 mins+, with one over 20 mins for good measure. At this point my race was collapsing.

Yet, this is where the team comes in. From crew to runner to supporter. You have to believe these setbacks are inevitable and can be overcome in a 24-hour race. With some great pep talks from almost all of the team, I was getting back on track. We constantly adjusted my fuelling strategy to get a formula that would work. Want to hear what it was in the end?

Around 100ml of coke alternated with salty crisps or a chocolate chip cookie every 15 mins. Can you imagine Usain Bolt grabbing some Pringles (other brands are available) as he hares down the track? Or Mo looking for Quorn goodness?

Once I had squared up the sickness I was reborn. I’m threatening hyperbole here but the last 10 hours were probably the most enjoyable I’d ever run. At 9pm on Saturday I was ready to quit ultra running altogether, by 9am Sunday I was flying (in relative terms) around the park and already thinking about the next one before this one was even done!

A medal was in sight

Men’s team manager, Robbie Britton, told me around 1am that if I could get back moving well we’d have a chance of a team medal. That lit a spark. My team needed me. It might seem silly but I’d felt I’d let them down last year and I didn’t want a repeat. If I was allowed to swear here I’d repeat what I said to myself repeatedly for a full lap as gathered my mind and body. As a clue, it rhymes with “let’s do this mothertrucker…”

The information coming from the crew with three hours to go was ‘we’re in a podium position’, with Germany slightly ahead and France with a big lead. Could we hold on and improve the position? This gave an extra spurt to us all. Every lap meant we were getting closer. With two hours to go we moved into second. The French were out of sight. Consolidating silver was the aim. Even though we were closing the French team down there was simply not enough time to catch them.

In the end, I did my fastest three laps as my final three. Moving to an agonising 210 metres short of 10th place. I’d gone from about 18th place to 11th in the last few hours.

Did having a long ropey spell mean that I had excess energy towards the end? Or did the lack of proper food intake mean I was running on fumes? Did I finish strong because I’d been forced to hold back? So many questions.

And that is the beauty of this event. It never goes perfectly, in fact, going “good” would be a great outcome. The race forces you to dig deeper than any other. The clock is always ticking, the finish line never moves closer. There is no line. Just the relief bringing hooter that signals to your legs and body it can close down now. It is the most fun and futile of ultra running events in equal measure.

There we have it. A team silver for the guys and a bronze for the gals. A great showing. A word on the performance of the women, as there were only three on the team, and the best three cumulative distances that count for team scoring, it meant they all had to perform and stay out there.

Tracy Dean, Ali Young and Wendy Shaw showed the kind of mental fortitude and guts that is an example to us all, Wendy messaged me this morning saying “I was worried I’d end up being stretchered off…” yet there was no prospect of her stopping. The suffering you are willing to do for your teammates out there is quite incredible. Wendy’s statement says it all. The team comes first, always.

For the men, we had James Elson, Paddy Robbins, Craig Holgate, Steve Holyoak and Dan Lawson. It reads like a who’s who of GB ultra running and I am immensely honoured to run alongside these guys. They are incredible athletes and teammates.

As for what’s next for me? Rest.

James Stewart features in the ‘Fast 10: class of 2018’ and will share his running journey throughout the year. You can read James’ previous posts here and further information about the ‘class of 2018’ can be found here.