Ben Fish reflects on his 2:26 marathon in London 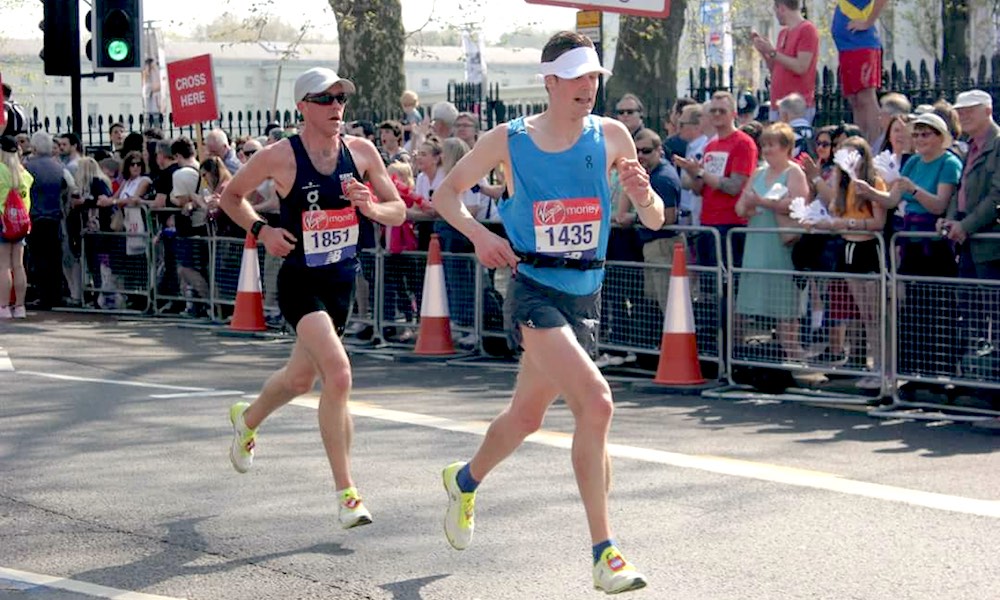 Ben Fish talks us through his 2:26:55 race at the 2018 London Marathon and assesses his training in the build-up.

In the few weeks before London, my training had gone as well as I hoped and I was also satisfied with my run at the National 12-Stage Road Relays on the April 14.

It was three years since Blackburn Harriers last fielded a team and we put up a decent effort to finish 29th, some eight places better than 2015. I ran the fifth leg and clocked 26:53, which again compared favourably against my effort on the previous occasion (27:44).

It rounded off a good winter and spring for our club and without trying to sound biased, I don’t think any other Lancashire club has been as prolific or successful within that period.

Since the wobble in March I have done everything feasible to get myself on the start line in the best possible shape, rattling off some good hard runs, sessions and mileage. I probably covered close to 380 miles in the last four weeks.

Making my way to London

I arrived in London on the Friday and got a lift down with my club-mate Allan Hartley and after picking up our numbers we parted ways, as I had a hotel booked in Lewisham, not far from the start, instead of being closer to the Expo.

I met up with the On Running Team the following day and took part in the “run to the Swiss Embassy” near Camden. It was a pleasant 5km run, where I got to meet fellow On athletes and staff, there was also a talk from Tim Don about his 2hr 49 marathon at Boston, only a few months after breaking his neck. If ever there was a message for not having excuses, then that would be it!

. @on_running ambassador @RunFish82 has his number & is ready for @LondonMarathon! #Onit get your free photo & print at the On Stand at London marathon expo#LondonMarathon #onrunning #runonclouds #BeOn pic.twitter.com/vpPx6ZxI4L

As expected, the weather was very hot on the day of the race; I suppose it stands to reason that after running throughout sub-zero conditions in March and early April, we’d be treated to the hottest ever London Marathon.

Still, it’s the same for everyone and we all prepared for it as best we could. I decided I’d wear a visor, something I’d never done before, I also toyed with the idea of wearing a neckerchief, but apparently they’re coming back in fashion, so I wasn’t prepared to splash out a load of dosh on a designer one.

In my view, London has quite a late start with 10am and as I made the short mile and a half walk to the start at 8:30am, it already started to feel a tad uncomfortable. I still believed I could run a personal best, so I had roughly planned to run 5km splits of around 16:30. I set off tentatively, but was bang on reaching the first 5km in 16:28, I then hit 10km in around 33:15-ish, but I knew by this point I was going to be in for a tough race.

Shortly afterwards I passed fellow On team-mate Russell Bentley, who like myself, was running on his own, as the race was already spread-eagled at this stage. I checked the clock at 10 miles, 53:42, I was already starting to slow, which coincidently was the same stage of the race I struggled in 2010 & 2011. I reached halfway in just under 71 minutes and I was getting passed by a couple of runners, this was where the race got a bit depressing. I decided to focus on effort rather than time and I wouldn’t look at the clock until I hit 20 miles, so I took a gel, ditched the belt and just put my head down, “let’s get it over with!”

Fellow On runner, Kojo Kyreme cruised past me early in the second half, I noticed he perforated his club vest with a hole puncher and I was thinking what a great idea that was, I was also thinking that there was no way I could match his pace. After I uttered a brief word of encouragement I watched him disappear further up the road.

The next three miles to the 18 mark was thoroughly miserable, but I stuck to the task and though I was running on my own, it at least meant that no one was passing me, which was giving me some semblance of hope.

I was taking the race at one water station at a time, miles and splits now didn’t mean anything, just keeping cool and ploughing on was all that mattered. I was also noticing other runners suffering, Matt Clowes was in a bad way when I passed him before the 20-mile mark, a runner who I have no doubt will soon post a sub 2hr 16.

I came up to the 20-mile mark hoping to be around 1hr 50-51, so it was satisfying to at least have held it together enough to manage it in 1hr 50:10. It wasn’t long before I passed another runner, Ethiopia’s Guye Adola.

I was actually feeling better in the latter stages of the race; I ditched the visor at 23 miles and focused on catching another runner further ahead. It turned out to be Kojo, who still seemed to be moving well, but had slowed a little.

There was just a couple of miles left and I knew I was at least going to achieve a respectable time, which was more than I could have hoped for ten miles earlier. The atmosphere was incredible all the way through the race, especially in the last mile which always helps to galvanise runners, especially the one who flew past me in the last 600 metres! I crossed the line in 2hr 26:55, a good eight minutes slower than I’d have liked.

My finishing position was 27th (including elite) and the eighth British man, which in fairness would usually require a sub 2hr 20 to manage in good conditions, so on reflection, my performance was better than I initially thought.

Although I haven’t posted a marathon best since 2012 at Rotterdam, I have been happy with how well I’ve finished in my recent ones (with the exception of Nottingham in 2015).

I’ve settled on only doing a minor taper in the final week (25% reduction) and a carbohydrate depletion on Wednesday & Thursday, followed by resuming normal eating habits in the final two days. Andrew Hobdell has also been really helpful at suggesting some different sessions to have a go at.

Ben Fish features in the ‘Fast 10: class of 2018’ and will share his running journey every month. You can read Ben’s previous posts here and further information about the ‘class of 2018’ can be found here.