Doyle, Clark and Healy advance to 400m semi-finals in Birmingham 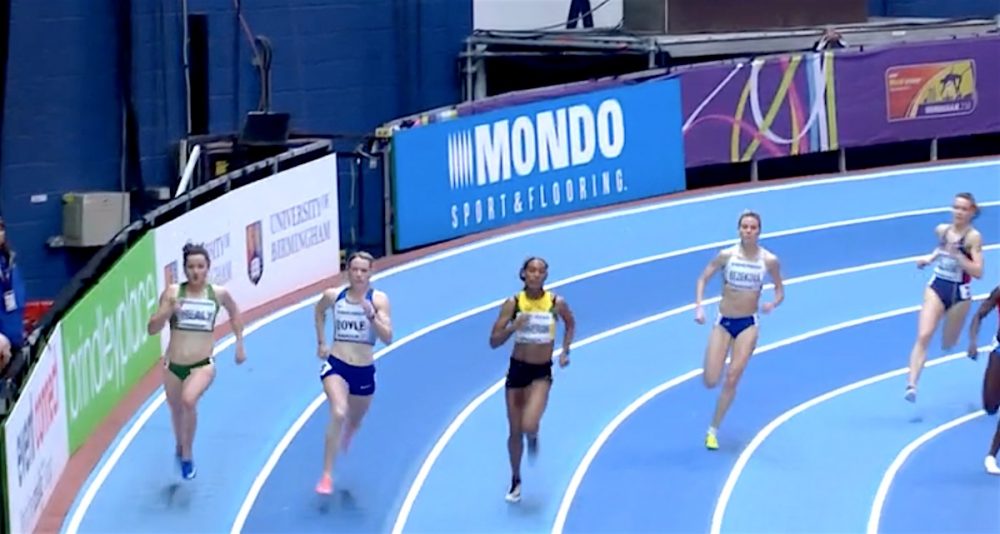 Great Britain’s Eilidh Doyle and Zoey Clark along with Ireland’s Phil Healy booked their spots in 400m semi-finals at the World Indoor Championships on Friday (March 2).

Scottish 200m indoor record holder Clark was the first to qualify after winning the third of six heats to the delight of the home crowd inside the Arena Birmingham.

The world relay silver medalist was comfortable throughout the race and came through 200m in 24.44 before crossing the line in 52.75, 0.30 seconds ahead of Poland’s Justyna Święty.

Healy who has recently converted to the 400m from the shorter sprints used her speed for a fast start out in front as the lanes merged running the fastest 200m split 24.03 in all the heats.

Going into the final lap the experience and quality of Doyle and Jamaica’s McPherson came to the fore as the pair moved into first and second, with Healy holding on for third. With the top two automatically advancing, 23-year-old Healy secured one the remaining fastest spots to create a bit of history as the first Irish woman to advance to the semi-final of a 400m at a world indoor championships.

Doyle, who retained her British indoor 400m title last month, said afterwards: “It was a good race although it was tactically a bit different to what I’ve had this year. I would have liked to have won the break and controlled the race but unfortunately I didn’t do that.

“It meant I could just relax that second lap and I knew I could catch them on the home straight. I need to be a bit more aggressive over that first 200m. I’m going to have to be tonight, because tonight is my final I’m going to have to really run my heart out to try and be here tomorrow again.”

The women’s semi-finals take place later tonight at 8:32pm with the men’s afterwards at 9:06pm.

In second men’s 3000m heat Jonny Davies finished 10th in 8:21.73, however after four men, including USA’s Paul Chelmno were disqualified, moved up to sixth. An appeal could yet seem some athletes reinstated.

Davies who clocked a 7:50.18 personal best in Boston this year was obviously disappointed with his showing in Birmingham.

“Obviously disappointing end to a great season,” said Davies afterwards. “Very frustrated and wasn’t myself today but lessons learnt. Onto the summer.”

Earlier on in the morning session, GB’s Asha Philip ran a very strong opening round in the 60m to advance to the semi-finals on Friday evening. The reigning European gold medalist clocked 7.18 for second to automatically qualify behind Ivory Coast’s Murielle Ahouré.

Bianca Williams, a late call-up to the British team booked her place in the semi-finals as one of the remaining fastest outside the automatic spots, posting 7.31 in the first of six heats.

In the green of Ireland, Amy Foster finished fifth in heat two in 7.35 missing out on a spot in the semi-finals. “It’s not a bad run,” the recent Irish 60m record holder said afterwards. “It’s just not what I was looking for.”

Elsewhere, after three events in the pentathlon, Katarina Johnson-Thompson is in second place, with the 800m and the long jump later this evening.

Johnson-Thompson, competing in the pentathlon for the first time since winning European indoor gold in 2015, opened her campaign with an equal season’s best of 8.36 seconds in the 60m hurdles, before moving into the high jump and a 1.91m best moved her first place. After the shot put, she dropped just one place to second thereafter.