Young and old, age is no boundary – Irish round-up 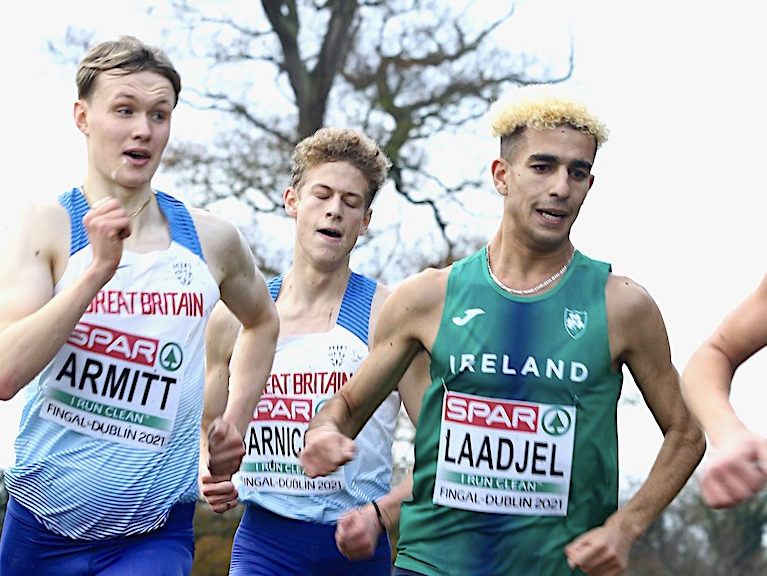 Abdel Laadjel in action on the cross-country. Photo: Lindie Naughton

McElhinney’s time of 8:02.8 saw him finish three seconds clear of 17-year-old Nick Griggs of Mid Ulster AC. In third place was Keelan Kilrehill of Moy Valley AC in 8:12.14. Truly the new generation of Irish middle distance running is on the march! Dominating the men’s 1500m was Luke McCann of UCD Ac who won in a time of 3:45.14. In the women’s race, Georgie Hartigan of Dundrum South Dublin AC was the winner in 4:23.26, holding off the challenge of Nadia Power of Dublin City Harriers who was a close second in 4:23.62.

In the sprints, Molly Scott of St LOT AC reclaimed the Irish 60m record with a time of 7.29 secs, while Phil Healy of Bandon AC proved the class of the field in the 400mwith a championships best time of time of 51.75.

Abdel Laadjel of Donore Harriers improved the Irish U20 Indoor 5000m to 14 mins 12.73 secs at the Big East Meet late on Friday evening (February 2) where the Irish were out in force.

Barry Keane of Waterford AC finished second and Evan Byrne of Togher AC fifth in that same race, with times of 13:43.81 and 14:06.86 respectively. Laura Mooney of Tullamore Harriers was second in the women’s 5km in a time of 16:18.49; Orla O’Connor of Waterford AC was ninth.

Triple gold medal winner Anne Gilshinan of Slaney Olympic was just one of the big winners for the Irish team at the European Master Indoors, which ended on Sunday (February 27)

Gilshinan began her campaign winning the W55 800m on Wednesday, following that up with the 3000m on Thursday and the 1500m on Saturday. Other Irish winners in the 3000m were Eoin Everard of Kilkenny City Harriers M35 and Denise Toner of Clones AC W40. Joe Gough of West Waterford continued his remarkable career when, at the age of 69, he won the M65 1500m after finishing third in the 800m earlier in the week.

10 is the magic number for Moldovan

Moldovan, recording another consistent time of 53:49, was well clear of St Finbarr’s duo Jeremy O’Donovan and Michael Morgan who finished second and third in respective times of 54:27 and 54:37.

The women’s record went when Jennifer Montague improved her Leevale AC’s team-mate Claire McCarthy’s best of 61:11 by one second when finishing 12th overall in 61:10. Second was Catherine Murphy of Eagle AC in 65:27 with unattached runner Jean Lucey taking third in 66:19.

The hilly nature of the Kinsale course along with the windy conditions meant that just ten runners broke the hour, compared to the much higher-standard Dungarvan race three weeks ago where 101 finished inside the 60-minute barrier. In other Sunday races, Jake O’Regan of St John’s AC was a clear winner of the Adare 10km in Co Limerick in a time of 50 mins 9 sec.

In second place in 32.30 was Declan Moore of Bilboa AC , while third was Barry Donovan of Cork Track Club in in 32.51, Ninth overall and first woman was Grace Lynch of Iveragh AC in 34:32. Dympna Ryan of Dundrum AC was second in 35:28 and Mary Mulhare of Portlaoise AC third in 45:54.

Also on Sunday, Darragh Green of Dunleer Ac won the Duleek and District AV 5km in a time of 15 mins 25 secs. First woman was Laura Buckley of Dunboyne AC in 17:44.

Mick Fogarty of Ferbane AC and Fiona Gettings of Longford AC were the winners of the re-scheduled Ardagh 10-Mile Challenge held in Co Longford on Saturday (February 26).

Conal McCaughey of North Belfast Harriers proved best of the men at the NI and Ulster Cross-Country Championships at Gransha, in Derry, on Saturday (February 26).

McCaughey held off the challenge of Annadale Striders’ Eskander Turki and Neil McCartan of East Down AC. In the team competition, Annadale got the better of arch-rivals North Belfast Harriers with City of Derry Spartans third.

Runaway winner of the inaugural Central BAA 4-Mile Cross-Country at Wesley College, Dublin on Saturday (February 27) was individual runner Ieuan Hopkins with a time of 21 mins 21 secs. Ben Mitchell was second in 22.19 and Ian McGrath of Bank of Ireland 22:34.

In the team competition TCD won grade A, Teachers grade B, Department of Education C, and JDES Electrical grade D.
The final BHAA cross-country race of the season takes place next Saturday, March 5, at NUI Maynooth.