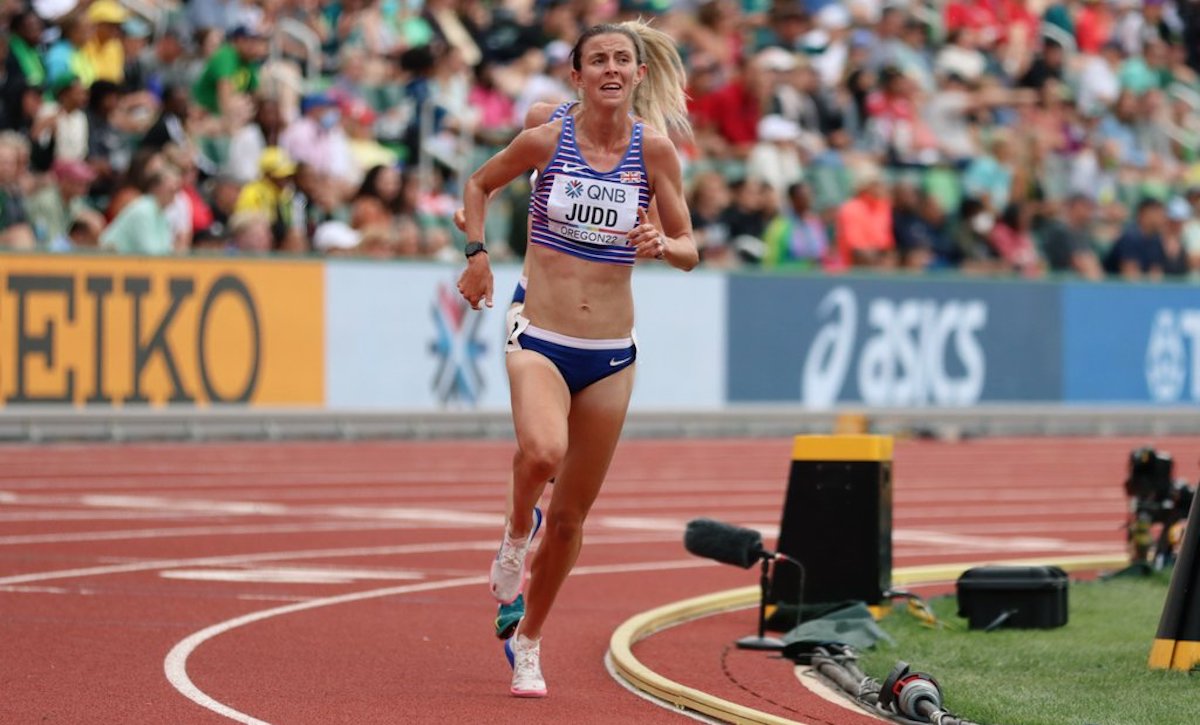 Whilst most eyes may be on the World Championships in Eugene in Oregon, including mine – as I’m writing this from the side of the marathon course at 06:00 on a Sunday – that’s not to say that there has not been anything happening across the UK. There has been plenty of action taking place on both the road and track. Let me take you on a run through of some of the week’s racing highlights in the US, UK and elsewhere.

I really must start in Eugene with some of the highlights of the first two and a half days of action. The breakthrough trace came from Jessica Judd in the 10000 metres, where she ran 30:35.93 to obliterate her PB and move to third on the British all-time list. She ran a tactically astute race over 25 laps, slowly moving through the field to finish eleventh in negative splits.

One place ahead of her was Eilish McColgan; the Scot has had a rollercoaster year that has included some incredible performances that have also come with injury and a bout of COVID. Given her disrupted lead-in she was happy, therefore, with a 30:34.60 clocking to finish tenth despite jointly leading out much of the early stages of the race.

With much of the distance action yet to take place, so far other British highlights include Laura Muir making the 1500m final to be held tomorrow, and Jake Wightman, Josh Kerr and Neil Gourley progressing safely to the 1500m semi finals. In the aforementioned marathon, Josh Griffiths ran 2:17:37 for 49th place. Sadly Chris Thompson’s visa woes meant he was unable to compete.
A shout out for Adelle Tracey also as she made her debut for Jamaica in the 1500m. Back in the UK, it has been a good week for Calli Thackery. The Hallamshire athlete had run the qualifying standard over 5000m for the Worlds, but the depth in British distance running at present means she did not make the team. That has not stopped the motivation, with Calli ending the week with two fantastic performances.

Barrowford played host to some superb racing this weekend with the Adizero Distance Project where athletes competed at every distance from the mile to the half marathon. The top three in the half marathon field of seven all ran under 65 minutes, led by Andrew Heyes (64:06) ahead of Mahamed Mahamed (64:23) and Phil Sesemann (64:53). Callum Johnson (29:15) took the 10k in a close battle with Ben Connor (29:18), whilst Eleanor Bolton (34:57) was the fastest female competing over the distance finishing almost a minute ahead of Georgia Malir (35:44).

I mentioned earlier it has been a good week for Calli Thackery, and that continued at Podium where she ran a superb 14:58 PB for 5k in a race where Alfie Manthorpe (14:12) was fastest overall. In the ‘C’ race Gemma Hillier-Moses ran 16:28 whilst in the ‘B’ race Kate Maltby clocked 16:30. Richard Allen was the 2nd fastest man on the night running 14:13 with Solomon Okrafo-Smart third home in 14:20.

She’s brave, she’s gutsy, she even asks the lads on the start line to ‘help her out’

Calli Thackery is a breath of fresh air, and unbelievably quick. pic.twitter.com/naRwtvypAU

It may be a low key event, but there were fast (albeit heat hampered) times at the Felsted 10k, with Dani Nimmock (35:47) and Thomas Frith (30:17) taking the respective wins. Earlier in the week, it was the turn of Finn McNally (29:48) and Emma Navesey (35:42) to cross the line with a winning feeling at the Brighton Phoenix 10k, the latter with a margin in excess of over 90 seconds.