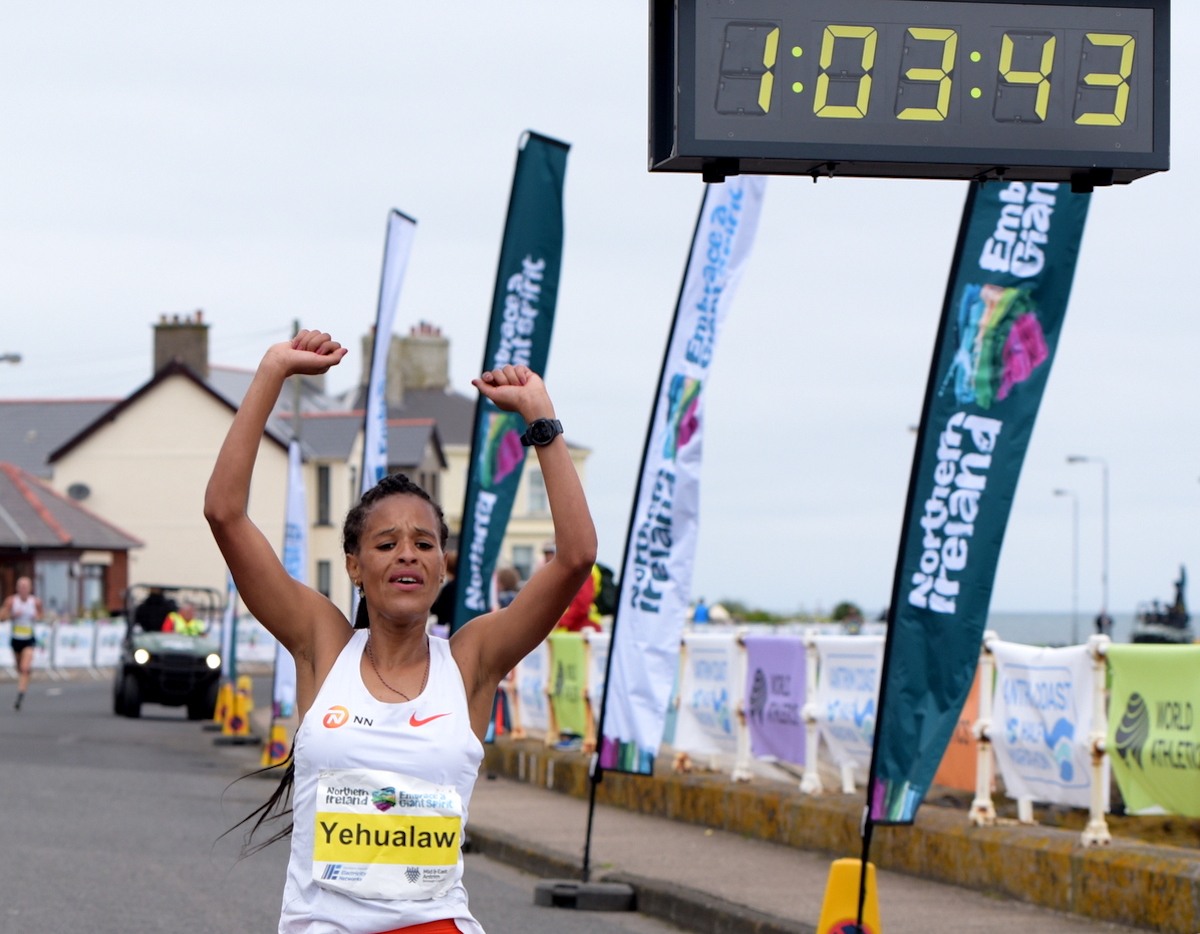 Yehualaw’s time of 63 minutes 43 seconds cut 19 seconds off the previous mark set by the Kenyan Ruth Chepngetich in Istanbul last April. Despite the windy conditions, Yehualaw, aged twenty-two, was well sheltered by her male pacemakers on the coastal course around Larne.

Her previous best time was 64: 40 set in Istanbul when she finished second behind Chepngetich. It was “a dream come true, something I have worked for all my life,” said the African Games gold medalist. “I was frustrated after not getting it in Istanbul but I am extremely happy now!” Jemal Yimer of Ethiopia won the men’s race in 60:30 just holding off the challenge of fellow Ethiopian Tesfahun Akalnew and of
Kenyan Shadrack Kimining who finished only seconds behind in 60:31 and 60:32.

First Irish finishers not far behind

First Irish finisher was Ryan Creech of Leevale AC who was sixth in 63:26 secs. Creech, now 29, is in the form of his life having run a sub-49 minute 10 Mile earlier this month in Kilbeggan.

Northern Irish athlete Stephen Scullion, who dropped out of the marathon at the Tokyo Olympics, finished tenth — one place behind Yehualaw — in 63:54. Jake O’Regan of St John’s AC in Co Clare was 13th in 64:16 and Eoghan Totten of Newcastle and District AC 14th in 64:16 secs.

Second of the women, and six minutes behind Yehualaw, was Vane Nyamboke of Kenya in 69:45 secs. English athlete Rose Harvey was third woman in 70:29.

Best of the Irish was Fionnuala Ross of Armagh AC in 73:10, with Ann-Marie McGlynn of Letterkenny AC one place behind in 73:13.

Among the spectators in Larne was Mo Farah, winner of the race in 2020 but forced to sit it out this year due to injury. Farah, a friend of race organiser and former Great Britain 800m international James McIlroy, was helping the commentary team.

Kevin Dooney of Raheny Shamrock AC made a welcome return to road racing on Sunday (August 29) when he won the Patrick Bell 5-Mile in Bohermeen, Co Meath after a tough battle with his clubmate Mick Clohisey.

Dooney duly held off Clohisey’s challenge to win in a time of 23 mins 54 sec, with Clohisey just three seconds behind in 23:57. Third was Martin Hoare of Celbridge AC in 25:06.

Sheila O’Byrne of Parnell AC was first woman in 28:03, followed by Denise Toner of Clones AC, who was also first W40, in 28:13 and the great Catherina McKiernan of Annalee AC in 28:28. McKiernan was also first over 50, beating all the men in that age category.

400 turn out in Letterkenny

At the Letterkenny Half Marathon, Mark McPaul of Finn Valley AC led home an entry of 400 in a time of 71 mins 11 secs. Second was Mark Grennan in 72:35 with Shane O’Donnell third in 73.23. First woman was Letterkenny AC’s Monica McGranahan in 90:07. Fiona Stack of Raheny Shamrock AC was second in 92:01 and Ciara Cunningham third in 97:26. Wheelchair winner was Karol Doherty in 81:10.

Colin Maher of Ballyfin AC was the winner of the Oylegate Half Marathon in Co Wexford.

Maher, who finished in 70 mins 19 secs, made it to the line ahead of Mathew McMeekin of Sligo AC who finished five seconds behind in 70:24. Third in 71:32 and first M40 was newly crowned Irish 50km champion Sean Hehir of Metro St Brigid’s AC in 71:32.

Winner the 10km was junior athlete Adam O’Conor of United Striders AC in 34:35. Marie Kinsella of Slaney Olympic AC was first woman and first W50 in 49:08.

In Co Offaly, Brendan Donagher of Naomh Mhuire AC won the Kilcormac and Killoughy Back Underway 10km in 35 mins 7 secs, with his clubmate Jimmy Coughlan a close second in 35:11 First woman in 41:44 was Sinead Rigney.

Gowran’s Niall Sheehan won the Kilkenny Board 10km on Saturday (August 28) in a time of 34 mins 51. Siobhan McArdle of Kilkenny City Harriers was first woman in 42:53. With Dean Rowe second and Johan Mueller eighth, Gowran AC were clear winners of the team title ahead of St Joseph’s AC and Castlecomer AC.

Ricky Johnston of Jog Lisburn RC was the winner of the Portrush 5-Mile in Co Antrim on Friday (August 27) finishing in 26 mins 25 secs. Michael Barton of Ballydrain Harriers was second in 239:38 and Darren Hamilton of North Down AC third in 29:37.

At the Strangford Festival 10km, also on Friday evening, Patrick McNiff was a clear winner by over three minutes in 32:03. First woman in was Louise McCourt in 46:57.

First home in the third round of the Roscommon 5km Series on Thursday evening (August 26) was Adrian Smith of the host club Roscommon Harriers in 16:47. First overall and first woman was Jackie Kelly of Ferbane AC in 20:03.

Hiko Tonosa of Dundrum South Dublin AC made a return to the roads on Wednesday (August 25) when he won the Celbridge 5km in Co Kildare.

Tonosa’s time of 14 mins 27 secs put him comfortably clear of the chasers led by Feidhlim McGowan of North Sligo AC who finished in 15:01. Third and first M40 was Mark Kenneally of Clonliffe Harriers in 15:11.

Sorcha Nic Dhomhnaill of Donore Harriers was first woman in 15:59. Sheila O’Byrne of Parnell AC was second in 17:16 and junior athlete Ava Costello of Trim AC third in 17:32

Finn Valley’s Eilish Flanagan was fifth in the women’s 3,000m steeplechase at the Hungarian Grand Prix in Budapest on Tuesday (August 24) in a time of 9 mins 49.31 secs. Race winner was the Russian athlete Anna Tropina in 9:31.44.

At the Olympic Games earlier this month, Flanagan clocked an impressive personal best of 9:34.86 taking six seconds off her previous mark.

A total of 2,347 runners started the race at 5 pm on Friday (August 27). In total, thirteen Irish, all men, completed the course. Weather conditions for once were near perfect, if a little chilly on the tops at night.

In the 56 km OCC, six Irish finished five of them women. Bernie O’Donovan, who is based in Spain was first of the Irish in 9 hrs 10 mins 32 secs and second W50. Eoin Keith’s wife Helen Dixon also completed the course.

Finishing 12th in the 145km TDS, which was tragically impacted by the tragic death of a Czech runner, was Aoife Mundow from Co Louth. She completed the course in 32:27.43. In the 101km CCC race, Paddy O’Leary from Wexford finished 37th in 13 hrs 7mins 23 secs. A total of 57 Irish had entered the four races on offer. Winning the Slieve Donard mountain race in the Mournes for a second time on Saturday (August 28) was Irish international Zak Hanna. The Italy-based athlete finished the 10km race with 850m of climb in 49 mins 15 secs.

By the time he reached the turning point on the summit in a stunning time of 32 mins 16 secs, he was out on his own and over two minutes clear of the chasers.

Timothy Johnston of Mourne Runners, who e reached the summit in third place did his best to give chase, recording a time of 14 mins 56 secs for the descent which was the fastest of the day and saw him finish second in 50 minutes exactly. First woman was Esther Dixon of Newry AC in 64:21. A total of 101 completed the race.

Hanna now returns to Italy to see out the season with Unione Sportiva Malonno.

In Co Wicklow, Edward O’Connor was the winner of the Wicklow 22km from Lough Tay to Crone wood on Sunday (August 29).

After his disappointment in dropping out of the Donadea 100km a few days earlier, Barry Minnock surprised even himself when he clocked the fastest time at the Downshill Uphill Mile on Wednesday (August 25).

The race in the Glen of the Downs, Co Wicklow, took place after a 3.5km jog from the race HQ at the Grove pub in Delgany.

Minnock was the only athlete to break seven minutes for the course, finishing in 6 mins 53 secs. Darragh Halpenny clocked seven minutes exactly for second place with Rain Mac Maloain third in 7:17.

Fastest of the women was Grace O’Rourke of Dundrum South Dublin AC in 8:14. Elizabeth Wheeler clocked 8:33 for second and Niamh O’Gorman of Kilcoole AC 10:02 for third.