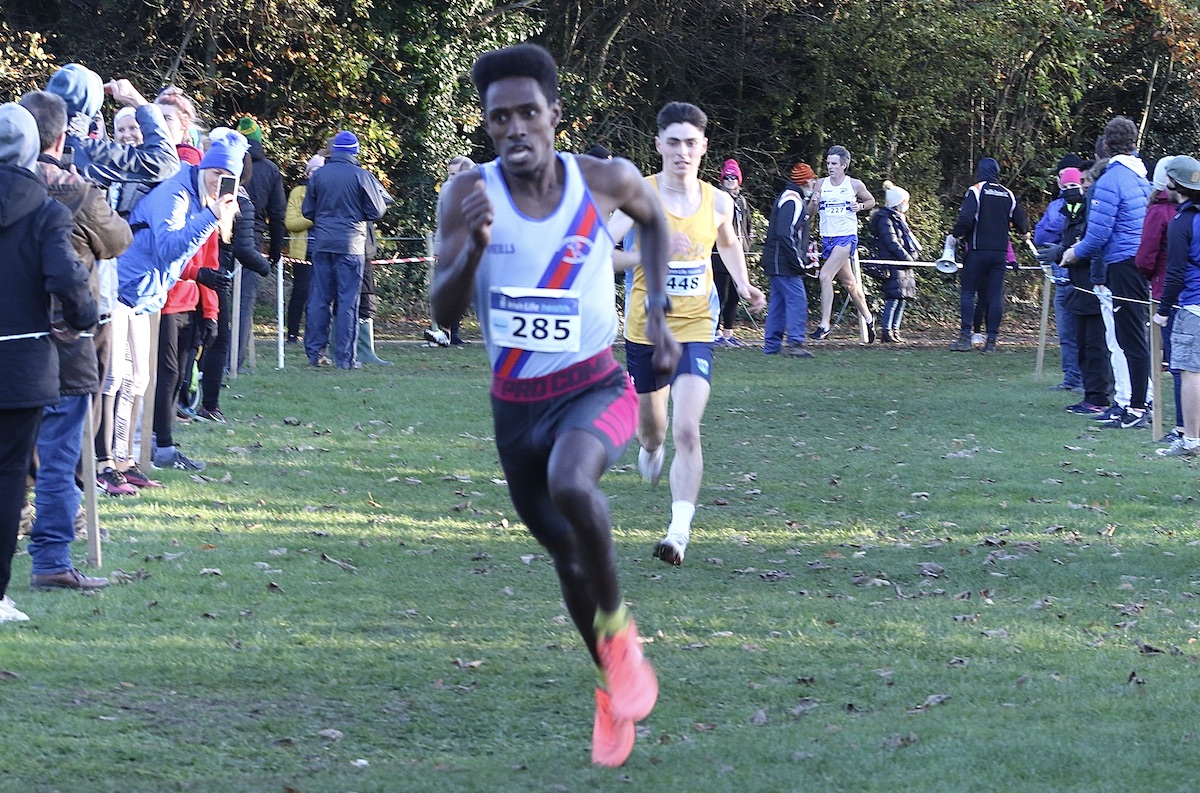 Hiko Tonosa has been in fine form over the cross country this season already. Photo: Lindie Naughton

The Casey twins not only finished first and second in the Under 20 race at the European Clubs Cross-Country Championships at Oeiras, near Lisbon in Portugal on Sunday (February 5), they helped their club Ennis Track to team victory — a rare victory in this competition for Ireland.

Dean Casey pushed the pace from the start of the 6.2km race followed closely by his twin Dylan and they finished in that order. Making up the team was Niall Murphy in eleventh place, backed up by Mark Hanrahan 18th.

In the senior men’s 10km, Hiko Tonosa of Dundrum South Dublin AC ran the race of his life to finish third. Tonosa ran a smart race, starting conservatively and moving into the top ten by the halfway mark. He then pushed on into third place with about three kilometres to go and held that position until the finish line which he crossed in 29 mins 51 secs. Race winner was Rodrigue Kwizera of the Playa Castello club in 29:27.

With Paul O’Donnell and Emmet Jennings finishing 36th and 37th, backed up by Matt Bergin 77th, DSD finished ninth of the thirty-one teams. Also lining out was a team from Clonliffe Harriers, led home by Sean O’Leary in 46th place. Marathon man Sergiu Ciobanu was 67th and Jonny Whan 77th, which saw the team finishing 18th.

Leevale’s Michelle Finn showed that she’s back in top form when she finished fifth in the women’s race over a distance of 6.4km. Finn moved up from about ninth place to fifth after the race settled down and remained in that position while the four athletes ahead of her battled it out for the medals. Race winner was Likina Amebaw of Playa Castello. In the team competition, Letterkenny, led by Nakita Burke in 25th place, finished ninth. Noeleen Scanlon had finished 31st, and a last minute surge from the veteran Natasha Adamspulled the Donegal club into ninth place ahead of Leevale in the team rankings. Leevale was just a single point behind for tenth, with Sinead O’Connor 37th and Niamh Moore 57th.

Best of the Irish in the women’s U20 race was Sarah Bradley of Finn Valley AC who finished 12th. Ireland had three in the top twenty; Emma Landers of Youghal AC finished 16th and Nuala Bose of Leevale seventeenth. In the team competition, Finn Valley was sixth and Youghal eighth.

At the Garda BHAA cross-country in Dublin’s Phoenix Park on Saturday, Laura McDonnell was a comfortable winner of the women’s two mile race, with Zoe Quinn second and Niamh Corby in third place leading Revenue to team victory over the Teachers and Eir.

In the open four-mile race, Mark Ryan was the winner in 22 mins 26 secs. Michael Kiely of Nypro Ltd was second and Thomas Sherlock from Bank of Ireland third, with Bank of Ireland best of the A graded teams. ESB were first in grade B, RTE in grade C and Dublin Bus in grade D. Next Dublin BHAA fixture is the ALSAA 5-mile cross-country at the ALSAA grounds beside Dublin Airport on Saturday next February 12.

Two ten mile races, one in in Munster the other in Leinster, produced very different results on Sunday (January 6).
In Dungarvan, Hugh Armstrong of Ballina AC was making a winning return to road running with a time of 48 mins 51 secs at the John Treacy 10-Mile.

Behind him, Conor Duffy of Glaslough Harriers in 49:31 and East Cork’s Tim O’Donoghue with a time of 49:45 both broke the 50 minute barrier.

First woman in 54 mins 19 sec was Olympic marathon woman Aoife Cooke of Youghal AC, which was a massive personal best. Second woman was Ruth Fitzgerald of Waterford AC in 58:10, while third was Siobhan O’Doherty of Borrisokane AC in 58:44.

Just over a hundred miles away as a crow might fly a very different race was taking place in Trim, Co Meath. Underlining the huge growth in club and team running over the past few years, a total of 89 men’s teams and a similar number of women’s teams had entered the race.

Well-established clubs such as Drogheda and District, Dunboyne, Dunshaughlin, Clonliffe Harriers, Sportsworld and the host club had entered several teams, while also signed up were new-look clubs among them the Porterstown Panthers, Love2Run, Navan Run Club, Coralstown Kinnegad and West Belfast Coolers.

Race winner in a respectable time of 50 mins 46 secs was Martin Hoare of Celbridge AC , with Kildare based athletes taking the top three prizes. Alexander Wallace of St Coca’s AC was second and first M40 in 52:32, and Brian Conroy of Clane AC third in 53.29. Celbridge was first team, ahead of Trim and Mullingar Harriers.

Perhaps the most impressive run of the day came from Aoife Kilgannon of Sligo AC who was a clear winner of the women’s race in 55:42. Isobel Oakes, also from Sligo, was second and Ciara Durkan from Skerries AC third. Trim proved best of the teams beating Mullingar Harriers and Bohermeen AC.

Andrew Coscoran of Star of the Sea AC ran a personal best 3:53.64 when winning a thrilling mile race at the New Balance Indoor Grand Prix at the Ocean Breeze Athletics Complex, New York, on Sunday (February 6).

The time more than made up for the disappointing time of 4:03:81 Coscoran had run a week earlier in the Wanamaker Mile.

On a good day for Irish athletics, Luke McCann of UCDAC finished third behind Coscoran in 3:53.87 — also a personal best time. Only a week earlier, McCann had run 3:58.21 at the Millrose Games in New York.

Another middle distance runner showing good form is Brian Fay of Raheny Shamrock AC who, in Seattle a week earlier, had run a personal best 3 mins 55.14 secs for the mile.

Still untroubled is the Irish record of 3:49.78, set by Eamonn Coghlan, which dates back to February 1983. In all, just five Irish athletes have broken 3 mins 53 secs for the classic distance, the most recent of those being Ciarán Ó Lionáird who ran 3:52.10 in February 2013.

Best individual performance from the Irish team at the Dynamic New Athletics international in Glasgow on Saturday (January 4) was Louise Shanahan who clocked 2:04.82 for second place in the 800m. Overall, Ireland finished third of the six countries entered – England, Scotland and Wales as well as Portugal and Spain

At the Czech Indoor Gala on Thursday (February 3) in Ostrava, Sarah Healy of UCD AC set a new Irish U23 record of 4 mins 11 secs when finishing third in the women’s 1500m. Nadia Power of Dublin City Harriers, better known as an 800m runner, was fifth in a personal best 4:13.60.

In the 60m, newly minted Irish record holder Molly Scott stormed to a brilliant win in 7.25 secs. It was Irish female sprinters who again took centre stage over the weekend, with Rhasidat Adeleke of Tallaght AC obliterating Scott’s newly minted Irish 60m record when she ran a time of 7.21 secs in the Collegiate Classic in Albuquerque on Saturday (January 5).

A day earlier, Adeleke, still only 19 and a student at the University of Texas, had run a time of 22.85 secs — the fastest ever Irish women’s indoor 200m and the first sub-23-second time.

However, since Albuquerque is considered to be at altitude, both times may enter the record book only with a qualifying asterisk. Youths on the run

The second day of the Dublin Juvenile Indoors on Sunday (January 6) saw some storming finishes at the National Indoor Arena in Abbotstown.

A thrilling U18 400m final saw Dundrum South Dublin making it a one-two. David Bosch was the clear winner, but it took a mighty dive over the line for Jack McGlone to take the silver.

Winning the inter girls 3000m at the South Munster Schools Cross-Country Championships at Slieveroe, Co Cork on Friday (February 4) was Claire Crowley of Kinsale CS. Inbhear Scéine Kenmare had a narrow victory over St Angela’s Cork in the team competition. At senior level, Holly Carroll of SMGS Blarney won the girls’ race over 3000m, with St Mary’s Macroom best of the teams, while Matthew Lee from Carrigaline CS took the boy’s title and led his school to team victory.