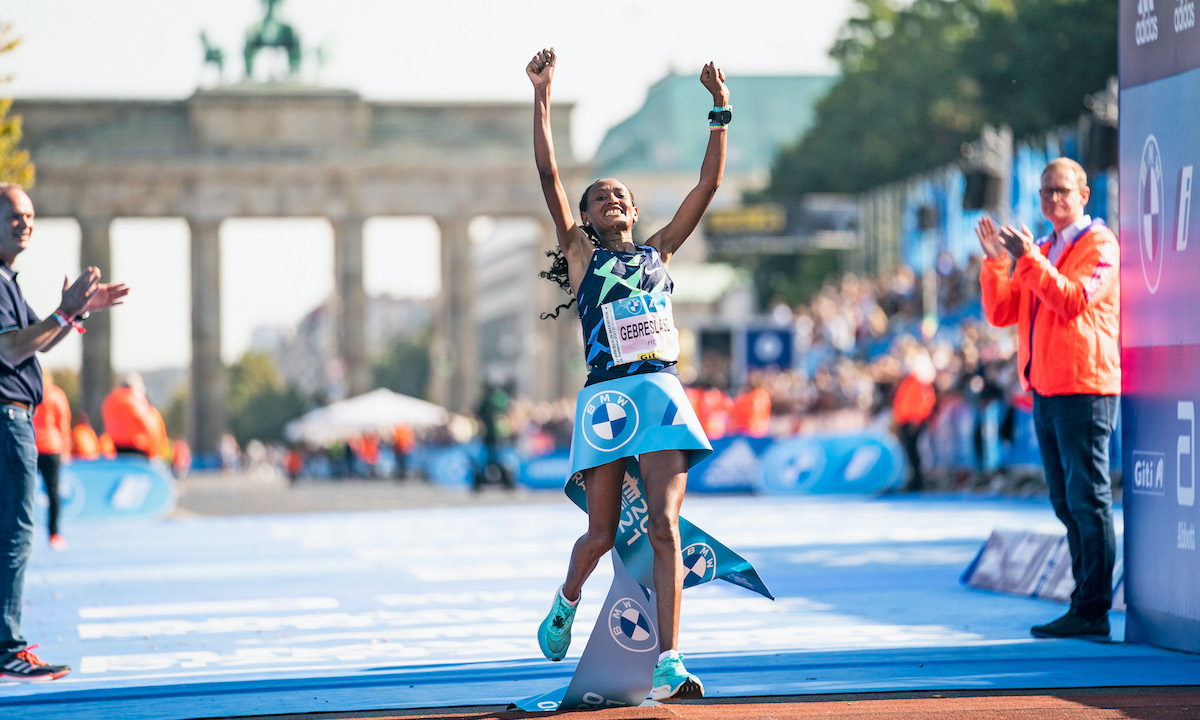 I’ll start today’s round up in Manchester for the welcome return of the Great Manchester Run 10k and Half Marathon. The event has seen some stellar athletes take victories in the past and, after a COVID-enforced hiatus, the event returned with strong fields over both distances.

Whilst eyes were focused on Marc Scott and Eilish McColgan following their performances on the streets of Newcastle two weeks ago, impressive fields had been assembled in both races and fast times certainly seemed on the cards.

Indeed, McColgan certainly made her intentions clear by setting off at a blistering pace, passing the third kilometre in 8:58 and the hallway point in 15:01. The latter split is incredibly 56 seconds faster than her road PB for the distance (albeit that time was run five years ago), and perhaps even more impressively would be good enough for fourth on the UK all-time rankings behind Beth Potter (14:41), Paula Radcliffe (14:51) and her mum Liz (14:57). It was also bang-on the pace of Agnes Tirop’s World Record (30:01) set just two weeks ago.

Early pace can make all the difference

The early pace soon took its toll, however, with the Scot’s pace noticeably dropping over the next few kilometres, although the Scottish Record, held by her mum, did not look out of the question at the 8km point. An uphill last 800m did not provide the springboard needed to pick up the pace and McColgan crossed the line in 30:52, putting her third on the British AT list.

An incredible performance especially when you consider it’s just two weeks since McColgan half marathon debut at the Great North Run.

Behind her, Olympic marathon representative Jess Piasecki had a PB-setting run in third, her 32:01 performance improving her lifetime best by 32 seconds, whilst Sweden’s Meraf Bahta finished second (31:44) as she makes her return following a one year suspension for a whereabouts failure.

Amy-Eloise Markovc was a credible fifth (32:35) in her debut over the distance on the roads. It may have been a gun-to-tape victory for McColgan in the women’s race, but it was anything but in the men’s.

Huge line-up battling to the line

A strong domestic field including GNR winner Scott, Andrew Butchart, Jack Rowe, Hugo Milner, Chris Thompson and Adam Craig, alongside Olympic marathon silver medallist Abdi Nageeye and New Zealand’s Zane Robertson toed the line and set off at a good pace, with Butchart taking the lead for the first half.

As the finish line got closer Scott, Butchart and Rowe pulled away from the rest of the field, with Nageeye and Belgian Soufiane Bouchikhi in close pursuit. Marc made a break with one kilometre to go, but was caught again by Butchart a couple of hundred metres later. However, the finishing speed that saw him pull away in the Great North Run was once again on show as the Yorkshireman kicked away to cross the line in 28:03, two seconds ahead of Butchart (28:05) with Rowe another two seconds back (28:07).

Significant lifetime bests for all three (29, 23 and 99 seconds respectively), and a Scottish Record for Butchart. A particularly impressive from Rowe who has set PBs this year at every distance from 1500m on the track to half marathon on the roads.

I haven’t done a deep dive to check if I am correct in saying this, but I reckon that is one of the fastest top-three times run by British athletes in the same race, whilst Nick Rose’s 1984 British Record comfortably lives to see another day. Behind the top three there was a big lifetime best for Hugo Milner, who’s 28:47 to finish eighth saw the Derby athlete take over two minutes off his previous best. Thanks to COVID it has been 22 months since an Abbott World Marathon Majors event took place with a mass participation race, and it’s a bit like buses; you wait ages for races to return and they all happen at once! Five of the six events that make the marathon major series are taking place over the next 42 days, kicking off with today’s Berlin Marathon.

The course is well known for its fast times and is home to the two fastest times in history, with the owner of the second of those times, Kenenisa Bekele, competing in his first race in 18 months. He was joined by Guye Adola, who in 2017 gave Eliud Kipchoge a run for his money with, at the time, the fastest marathon debut in history.

I’ll start with the British athletes in action. There was a considerably smaller contingent of Brits on the streets of the German capital compared to previous years, in part largely due to the congested calendar in the coming weeks. However, a fabulous 2:38:34 performance by Alison Lavender saw her finish 18th with Lucy Niemz 36th (2:51:33) and Victoria Wright 37th (2:52:11). Matthew Clowes’ 2:18:55 saw the Cardiff runner finish 21st amongst the men, with Connor Duffy 24th (2:22:41) and Chris Mason 32nd (2:25:01).

The men’s race paid most of the attention

Much like the TV coverage, I’ll focus on the men’s race first, where a request for the pacers to hit the halfway point in 61:00 suggested a World Record could be on the cards on the notoriously fast course.

The leading men went out faster than ever seen before, crossing 10km in 28:47, 15km in 43:12 and reaching halfway in 60:47. That is the fastest half in a marathon ever and 19 seconds faster than Kipchoge was at this point in his 2:01:39 race. Could we be witnessing something very special?

The answer, it turned out, was that we were watching a lesson in how not to pace an effort over 26.2 miles. It didn’t take long for the pace to rapidly slow as athletes dropped one by one from the leading pack, which was reduced to four by the 25km point.

By 35km (reached in 1:43:09 for the leaders), the pack was down to two, Kenenisa Bekele and Guye Adola. Soon after, however, the former 5000m and 10000m World Record holder was dropping off the pace, leaving his compatriot to lead in his fourth ever marathon.

Pacing it for the win?

However, a shock appearance followed in the background, as Kenyan Bethwel Yegon was making a charge for it, having run a much more conservative pace for the earlier stages of the race; he was 86 seconds behind the leaders at the halfway point.

Yegon swiftly passed Bekele before drawing alongside Adola, and it was not until beyond the 40km point Adola made his break for victory. It was successful, and he crossed the line in 2:05:45. That is the slowest winning time in Berlin for 12 years, possibly a surprise in the era of the super shoe.

Sadly the coverage of the women’s race was sparse, making it considerably harder to tell you what actually happened over the 26.2 miles. We’ve used the finish picture as our main photo this week to try bring so much due credit the way of the winner.

For long parts of the race the women’s leading group was on a pace for a sub 2:19 finish. A group of four reached half way in a promising 69:19. World leader Hiwot Gebrekidan, who ran 2:19:35 in spring, Helen Tola, debutant Gotytom Gebreslase and Kenya’s Fancy Chemutai formed the first group behind the pacemakers at this stage.

With around 10k to go it was Gotytom Gebreslase who increased the pace and moved ahead of pre-race favourite Hiwot Gebrekidan. She was still going very fast at 35k with a split time of 1:54:54 which pointed to a 2:18:30 finishing time. However on the final kilometres the warm temperatures took its toll.

Gebreslase was not able to keep the pace and in the end she missed a sub 2:20 time by just ten seconds. “Although it was my first marathon it was my aim to win the race. Berlin has a great course and I would like to come back for this race,“ said the athlete afterwards.

2:20:09 was in fact the sixth fastest debut in history, so the future looks bright for the Ethiopian marathoner. Roll on London next weekend!

If last week it was the 10km for which there were no shortage of races across the country to bring you, this week is all about the half marathon, with a host of locations joining Manchester in hosting races over the distance this weekend.

It’s been a busy couple of days for Jo Pavey, who took victory in the Windsor Womens 10k on Saturday (36:19) and also ran at a Saucony invitational 10k in Essen in Germany on Friday.

In Woking, the Surrey Half Marathon on Sunday provided Emily Jeanes (83:32) and Ben Goddard (70:41) with victories, whilst the Ealing Half Marathon, also on Sunday, provided Jonathan Poole (68:50) and Melissah Gibson (79:51) with close-fought wins ahead of Andrew McCaskill / Ollie Garrod and Alice Sunderland / Sharan Basrai respectively.

Andrew Heyes’ 66:04 saw the Hallamshire athlete take the win at the Sunday’s Asda Foundation Sheffield Half Marathon, his first race since finishing fifth at the Vitality Big Half last month. An 83:27 clocking by Caroline Brock took the win amongst the 1,285 women racing. The 10km event was taken by Eleanor Baker (38:32) and Jamie Hall (31:24).

Half marathons all over the shop

Moving significantly further south, Paul Navesey took his second victory at the Barns Green Half Marathon (70:26), over two minutes ahead of Neil Boniface (72:29) and Parick Acaye (78:29). Daisy Burchfield and Grace Hanna battled it out for the title of fastest woman, crossing the line in 1:37:47 and 1:37:58 respectively. A shout out for my clubmate and training partner Andrew Aitken who finished fourth in 78:43, his second fastest half marathon on a challenging and undulating course.

The Beckenham Half Marathon on Sunday took runners on a tour of the streets and parks of the south London town, and it was Striders of Croydon’s Tatsuya Okamoto who won the 13.1 mile race; his 1:21:48 over a minute ahead of second placed Simon Thornhill. Emma Cahill’s 1:42:15 was quickest of the 222 women who took to the course.

Aberystwyth AC’s Gary Davies and Kitty Bay of Swansea Bay Orienteering Club recorded the fastest times at the Pembrokeshire Half Marathon, crossing the line in 81:55 and 1:37:24 respectively. The 10k race attached to the same event went to Caryl Wyn Davies (45:31) and Ollie George (36:34). Fireworks in Manchester may take the headlines this week, but plenty of other races offered athletes the opportunity to run fast times over 10km.

A week after ‘accidentally’ winning the Great Run Bristol Half Marathon last week whilst entered in the 10km, Omar Ahmed completed his intended shorter distance today in winning the Brecon Carreg Cardiff Bay 10k (28:42), whilst Sonia Samuels also took the win with 34:38. Full details on the race can be found in this report. Kate Holt recorded one of the fastest times outside of Manchester this weekend with a 33:52 at the Farndon 10k, finishing over three minutes ahead of second placed Joanna Marsden. Benjamin Goodfellow (32:51) finished one minute ahead of Katie to win the men’s race.

Half a minute margin of victories provided Rebecca Curtis-Hall (20:37) and Michael Wilson (15:39) with wins at the Surrey 5k.

A festival of movement in Hackney

The 2021 Hackney Half Marathon was won by Jonathan Cornish – Wimbledon Harriers AC (male winner) who returned to retain his position and Laura Kaye – Victoria Park Harriers & Tower Hamlets AC (female winner) with times of 01:06:36 and 01:19:12 respectively. Male Winner Jonathan Cornish said of his time “I loved this event, it had a great atmosphere; from the entertainment to the singing and cheering spectators! Great vibes and so good to see so many people back getting active and exercising.”.