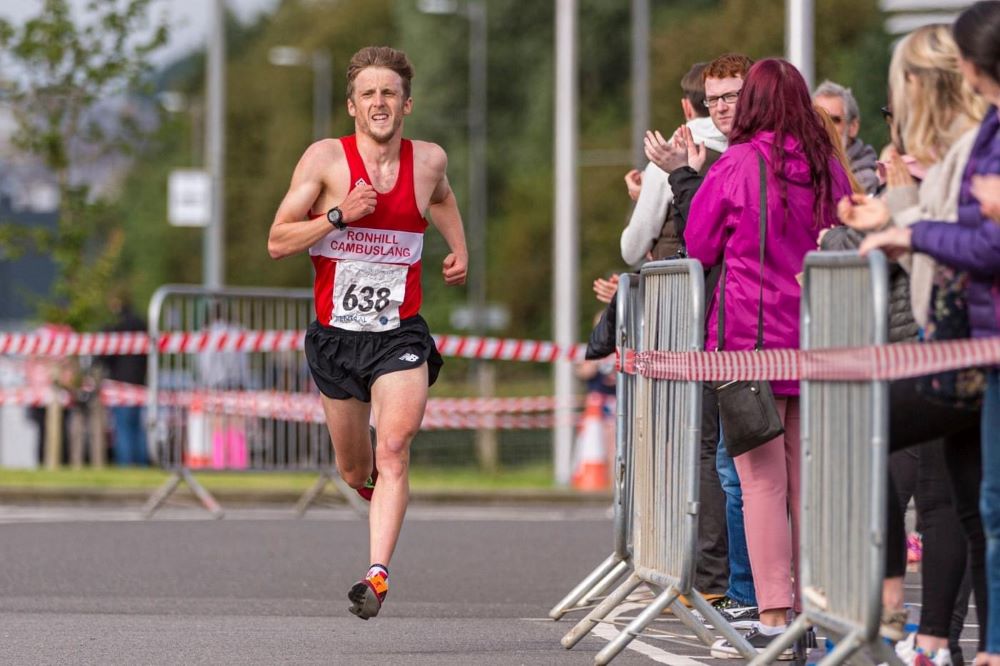 As I type, the Scottish Athletics Tru Wealth Virtual Relays are in progress and it’ll be interesting to see how their top finishes compare to last week’s competition in England.

The racing takes place from Friday 10 April to Monday 13 April and at time of writing the 5k short leg table was topped by U20 runner Joe Ewing of Edinburgh AC. Joe’s 14:50 is 35 seconds faster than his formal PB.

Ewing’s time brings him in comfortably ahead of Inverness Harriers’ Cameron Young who himself ran a V-PB of 34 seconds to reach home (or wherever) in 15:26. Metro Aberdeen currently hold the bronze spot with a 15:41 courtesy of Tom Brian and, you guessed it, another PB – this time of 32 seconds.

For the ladies Fife AC’s Jenny Selman is currently holding top spot with a 17:36. Interestingly the ladies are currently not boarding the PB train. Morag Millar of Central AC was a little way outside her race PB, though for the moment it is enough to hold on to second – 18:26. Jennifer Cruikshanks of Fife is third as a type, in 19:16. The Fife ladies are either just the ones getting out there early in the competition window or they are all set to dominate, as Annabel Simpsons currently holds the fastest time over the 10k long-leg, with a 36:54 . Central take the next two spots though thanks to Fanni Gyurko with 36:55 and Jennifer Wetton with 37:11.

In the men’s long-leg Douge Selman of Corstorphine seems to have got the PB memo, running a 30:22. He’ll be hoping no one goes faster than him. Jamie Crowe of Central AC has a faster PB on paper but is currently settling for second place after hitting stop on Strava at 30:48 and Edinburgh AC’s Andrew Fyfe is nipping at his heels (metaphorically – please don’t shame him) with a 30:53.

You might be forgiven for feeling a sense of deja vu. Last weekend we also a Scottish Road Relays taking place organised by the University of Edinburgh Hare & Hound Running Club. They put together a fantastic full report on the results for us and you can check it out here. If you’re in any way engaged with social media it can’t have escaped your attention that over the last week the Virtual National Road Relay Championships took place.

Lucy Reid of Tonbridge AC, who came third in the Great Birmingham Run last October, was fastest lady overall in 16:19. Reid has been in fantastic form in 2020 resulting in England selections for both Granollers Half Marathon and Antrim Coast Half Marathon.

Grant Sheldon’s time of 13:38 was enough to see him top the men’s list albeit with a little debate around the course he chose. A full report on the club results and top 10 can be found over here. So head on over and read up on all the action including the battle for the top in the men’s race and the top 10 competitors.

In the meantime, let’s have a little dig into some of the other results. In age graded performance terms, Leicester’s Tommy Hughes can be mighty happy with taking the top ranking performance (98.87%) and a time of 16:09. The Olympian from Barcelona is now 60 and continues to perform at an incredible level.

In the veteran’s overall category British Army and Wallsend athlete Danielle Hodgkinson clocked a 16:49 for first place, followed by the aforementioned Kirsty Longley and Guernsey’s Jenny James in 17:09. Stalwart of the London racing scene, Paul Martelletti (V40) posted a 14:36 to top the mens vets ranking for VP&TH, with Kojo Kyereme of Shaftsbury Barnet logging a 14:53 and Bedford’s Darren Deed coming in under 15 to take third in 14:58.

There was an (imaginary) photo finish in the men’s M50+ competition as Tim Hartley of Notts AC dipped for the virtual line in 16:08 to nudge a win over the age-grade champion, Tommy Hughes. Mark Horsman was behind him again in this category too.

For the W50+ women one Debra Mason of Long Eaton RC took top spot in 19:08. Back in 2005 Debbie competed for GB at the World Championships in Helsinki where she ran the marathon alongside Paula Radcliffe and Mara Yamauchi (amongst others).

It’s been a while since she’s logged a power of 10 performance, so it was great to see her name on the board and see what she’s up to. Chasing Debbie for the W50 honours was Karen Murphy (Barnet) with a 19:26 – the fastest we’ve seen from her in a while. Clare Joliffe rounded out the medal spots with a 19:30 for Bristol & West.

The Maverick running team normally specialise in putting on trail races in some of the most beautiful spots in the country. In fact, some of my happiest running memories are from their races. For now though they are running the Maverick Adidas Terrex Virtual Run Series for four weeks. You can enter a 5k, 10k or 15k performance run on any terrain and the race window finishes each Friday evening.

At close of play this week Nick Hardy of Tipton Harriers topped the leaderboard with his 15:25. It looks like that might also have been his entry for the National Road Relays. There’s another interesting debate to have – is it ok to submit the same run to multiple virtual event?

Bristol and West AC’s Ben Maliphant was not just socially distant but would have been a fair distance behind Nick in a real world race, finishing in a creditable 16:50 to take second place ahead of Jamie Giles (Serpentine RC) who completed his 5k in 17:53. G

iles’s time was a PB and part of a “buggered up” (his words) interval session which resulted in a 10k and 5k double PB-whammy. Clearly the silent streets of London make a great race track.

The men’s 10k winner was…. Oh wait… Jamie Giles. With the run that keeps giving, Giles killed three racing birds with one stone to finish his 10k (PB) in 36:55. Michael Harris was next in line with a 38:50 and Maverick Trail Division’s Ben Rajan completed the top three in a 39:31 over a Hackney-Walthamstow Marshes course – though we did note the 41:09 moving time Ben ;-).

Finally, the 15k had only one competitor duck under the hour mark and that was James Phillips of Precision Hydration. He raced his chosen route in 55:12 leaving him streets ahead of Tom Coombes (1:01:37) and Thomas Morrison (1:03:18). Alice Sowden topped the women’s rankings in one hour flat. She was followed by another Never Stop London runner – Yvette Casallas – in 1:16:34 and V40 runners Vic Mayes (1:17:25)

Virtual edition of a classic

Virtual Isle of Man Easter Festival of Running is taking place from the 10th-19th April. It offers an array of straight and, we suspect rather less straight forward, races. There is a Pint race and a chunder mile…

The ideal setup is that you run each race on consecutive days, much like the real event. However, the organisers appear to be flexible on that particular rule. The races are the “Port Erin 10k”, the “Peel Hill Race” which must be an uphill route with minimum 300ft climb in at least 2 miles. Then the “Douglas 5k” which must be an out and back. Finally, for the brave/foolish, a Pint race or Chunder mile….

More information over on their facebook page.  At the time of writing only a handful of 10ks have been logged. Andy Norman is leading the pack for the moment, in 32:01. James Hoad is next in 32:36 and Simon O’Meara currently holds third in 34:33.

First lady to clock a winning time (for now) is Natalie Wangler with a speedy 36:54, ahead of Vicki Cronin in 40:15 and Grace Randford, who is representing the U20s with her 40:52.

If you’re after some more racing over the coming week we’ve got you covered. The Maverick series is back for round 2/4 and there’s still time to post an entry into the aforementioned Manx festival.

Expect some swift times in the virtual Podium 5k – known for attracting speedsters in their ‘normal’ races, they are hosting a knockout 5k competition. Log a 5k time with them on Facebook or Twitter from 11th – 18th April and the fastest 128 will be taken through to the next round. From then on, every fortnight the bottom 50% are culled, until the final four duke it out for cash prizes. No point to point routes – check their Facebook for full rules.

For a different type of competition, the slightly enigmatic Straw Bear Striders are hosting the Fraud-Bear Virtual 5k champs. There will be multiple classifications on both the Male and Female side, where virtual jerseys will be awarded to the leaders of each classification at 8pm daily, for the preceding days racing.