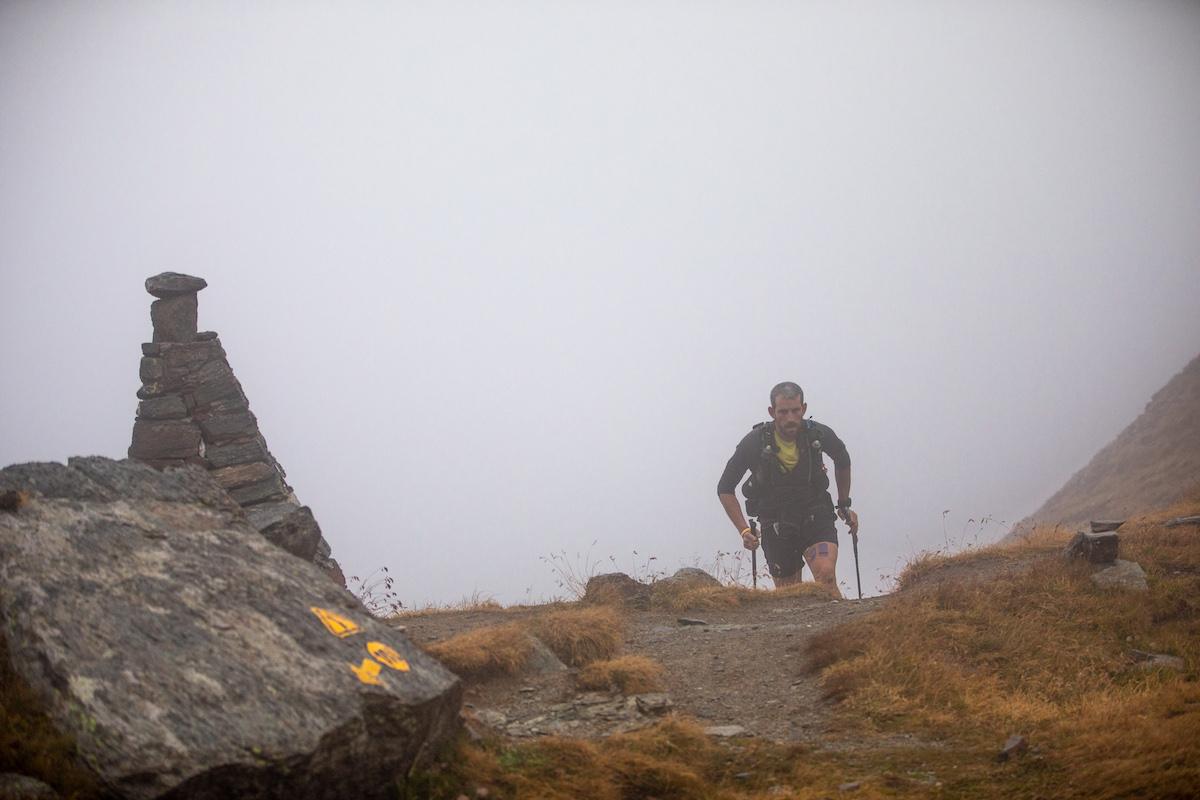 For the most part the weather was good, but when it turned a little more "Irish", Tierney was clearly happy. Photo: Roberto Roux/TorX

Once again Lindie Naughton brings you Irish success from the mountains and the roads, this week starting in Italy following an excellent race by a former All-Ireland hurler.

After setting off from Courmayer in Italy’s Val d’Aosta on Sunday, September 12, Tierney arrived back in Courmayeur after 88 hours 5 minutes negotiating a 349 kilometre course (despite the name including 330) with 32,000 m elevation, around the foothills of the highest mountains in the Alps, the Gran Paradiso Natural Park and the Mont Avic Regional Park.

Twice going over 3000m in elevation, and 20+ times above 2500m up in the clouds, the race known locally as “the Tor” brings together some of Italy and the world’s best mountain masochists to see who can run, hike and stride the longest on minimal sleep and Italian checkpoint food.

The inov8 sponsored athlete, no stranger to sleep deprivation with records like the Wainwrights in his resume, started with control and spent the entire 88 hours overtaking those ahead. Even in the last few checkpoints, when athletes were pretty well spaced apart, a couple more passes were made.

“My favourite part of the race this year was the section from Rifugio Barma (185k ish) to Valtournenche at 240k. I ran most of this section with Joe Grant from the US and we worked well together,” Tierney told us. “It was also away from Donnas, the lowest (300m), hottest and most humid part of the race, which had caused me some stomach issues that lost time.” Winner of the race for a third time was Franco Collé in a record time of 66 hours 43 minutes.

On the roads of home

Prolific road racer Sean Doran of Clonliffe Harriers was back in winning form at the Rás Gaelscoil Éanna 7km in Navan on Sunday (September 19).

Doran’s time for this unusual distance was 22 mins 39 secs, which gave him a twelve-second lead over Kevin Donagher of Rathfarnham WSAF AC who finished second in 22:521. Third was the in-form Ronan Wogan of Bohermeen AC in 23.47; Wogan was also first M40.

First woman in 25:39 was Laura McDonnell of Rathfarnham WSAF AC; she had a clear win over Esther Requena Ferri who finished in 28:03. Ann O’Brien of Balbriggan and District AC was third and first W40 in 29:21.

Gallagher and McCambridge strong over 5km

Also on Sunday, Gerard Gallagher of Finn Valley AC was the overall winner at the Donegal 5km held in Letterkenny.

Gallagher won in 15 mins 26 secs to take the Shane Bonner Memorial Cup. Eoin Hughes of Letterkenny AC was second in 15:29, with John Paul Williamson third in 15:31. Best of the teams was Rosses AC led home by Declan Ferry fourth and Charlie O’Donnell, fifth and first M40, backed up by Shane O’Donnell and Mark Ward. First M50 was the ageless Pauric McKinney of Inishowen AC who was ninth in 16:31.

Maria McCambridge of Dundrum South Dublin AC was first woman and first W40 in 17:01 – her second win in eight days. Finn Valley’s Jennifer Elvin was second woman in 17:08 and Teresa Doherty of Finn Valley AC third in 17:18. Best of the women’s teams was Finn Valley AC with ;Natasha Kelly and Catriona Devine making up the scoring quartet.

At the Louisburg Half Marathon in Co Mayo on Saturday (September 18) Shane Begley of Castlegar AC in 78 mins 41 secs and Catherine Thornton of Crusaders AC in 85.24 took the honours. Winning the associated 10km were Anthony Sharkey of Lambay Sports Academy and Edel Reilly of Mayo AC. Their times were 35:06 and 39:26 respectively.

In perfect conditiosn for cross-country running, Kilgallon finished in 14 mins 30 secs, giving her a 37 second lead over marathon runner Breege Connolly of City of Derry Spartans who finished in 15:07 and was first W40.

Runners had travelled from all over the country for the races and in third place (and second W40) in 15:32 was Leevale’s Michelle Kenny. Fourth in 15:48 was Niamh O’Mahoney from An Riocht AC in Co Kerry who was also first junior. Best in the Galway Novice Championships, run in conjunction with the event, was Aine O’Farrell go Galway City Harriers. With Ellen Morley fifth and Kathryn Casserly sixth, Galway City Harriers were first team, beating their own second team and Craughwell AC into the minor placings.

Junior athletes from Ennis Track Club took the first two places in the men’s 6km, with Dean Casey the winner with a time of 19:26 and Niall Murphy second in 19.40. In third and fourth places for Craughwell AC were William Fitzgerald in 19:43 and Oisin Davis, who finished in 20:51. The pair were also first and second in the Galway Novice Championships.

Track still here, but only a wee bit

At the Antrim Forum on Saturday (September 18), Gavin Corey of Strive RC won the Northern Ireland and Ulster 10,000m championships title with a time of 32 mins 17.50 secs. Mathew McMeekin of Sligo AC was second in 32:24.90 and Tadhg Ryan-Charleton of Leither Harriers AC. Back to the mountains

Hanna is currently at 13th place in the World Cup rankings, with six rounds to go.

Locally, Brian Furey of Rathfarnham WSAF AC was a clear winner of the Luggala Mountain race in Co Wicklow on Saturday (September 18).

In the associated half marathon, the winners were Thomas Blackburn in 1:40.08 and Sophie Daly in 1:42.21; Daly was also second overall.

Laura Nicholson of Bandon AC finished 32nd in the women’s 5km at the Iona Br. Paddy Doyle Meet of Champions cross-country at Van Cortlandt Park in the Bronx, New York on Friday (September 17). Her time was 19:51.8.