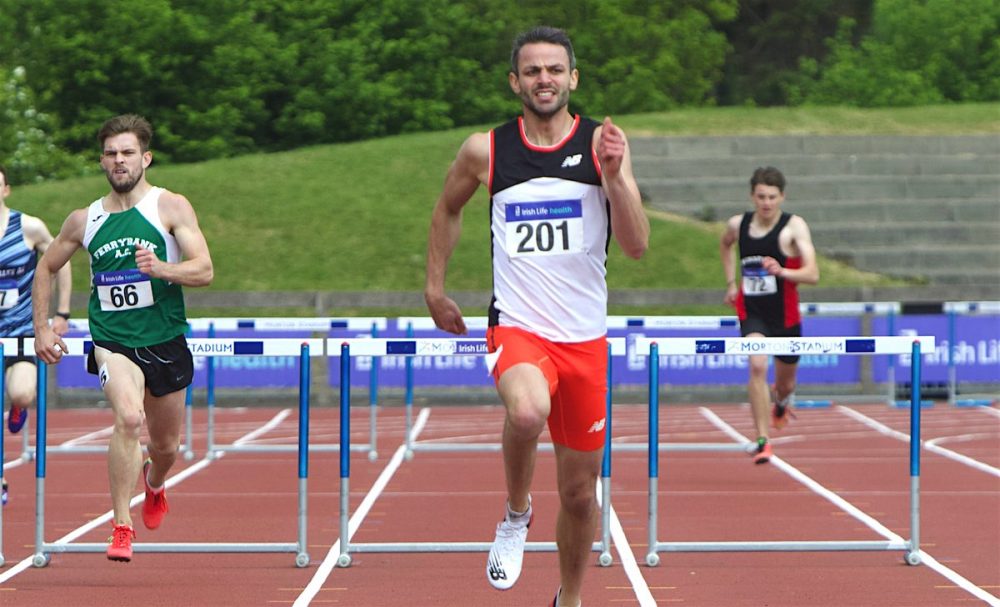 Along with the AAI Games in Santry and the Irish Miler’s Club meet in Belfast, some of Ireland’s top talent was competing in Belgium and England this weekend.

Thomas Barr of Ferrybank AC eased into the outdoor season with a comfortable win over the 400m hurdles at the AAI Games in Santry on Sunday (May 27).

“I was hoping to go a little faster but the first race of the season is always tricky and overall I’m pleased,” said Barr, who clocked 51.23. With his focus firmly on the European Championships next August, Barr’s next race is in Turku, Finland in 10 days time.

Over 200m, Phil Healy ran an eye-catching time of 23.09, helped by a +3.2m following wind; it was her second wind assisted time of close to 22 seconds this season.

Making a spectacular comeback to finish second in 24.43 was many times Irish 200m, long jump and combined events champion Kelly Proper of Ferrybank.

Proper, who gave birth to her first child just over a year ago, hasn’t competed for three years. “I wanted to put down a marker, but I was incredibly nervous before the race,” she said after crossing the line. Proper, who has won 17 Irish national titles, still holds the Irish long jump record at 6.62m and her time of 23.165 for 200m from 2016 is the second fastest Irish time ever. Clocking a World junior A qualifying time when winning the women’s 400m in 53.64 was Davicia Patterson of Beechmount Harriers. Second was Ciara Deely of Kilkenny City Harriers; her time of 54.68 was inside the B standard.

Also taking place were the National Combined Events Championships, but the Irish record holder Elizabeth Morland of Cushinstown AC opted out, preferring to compete in two individual events. In the 100m hurdles, she beat UCD’s Sarah Lavin in 13.58. She also won long jump with a slightly wind-assisted 5.95m.

Retaining their senior combined events titles were Shane Aston of Trim AC and Amy McTeggart of Boyne AC, who both improved their career best scores. Aston had hoped to make 7000m in the men’s decathlon and, despite the changeable weather, got close with 6776 points, while McTeggart scored 4706 in the senior women’s heptathlon.

Olympic steeplechaser Kerry O’Flaherty of Newcastle AC booked her place a next August ‘s European Championships with a time of 9:53 for third in the women’s steeplechase at the IFAM International Flanders Meet in Oordegem, Belgium.

Despite the attractions of major meets in both Dublin and Belfast, a large group of Irish had travelled to Belgium for what is effectively one of the largest graded track meets in Europe. In the 5000m series of races, Darragh McElhinney went under the World Junior qualifying mark with a time of 14:11.80.

Just ahead of him in 12th place was Conor Dooney of Raheny Shamrock in 14:10.59, while winning a different race in 13:43 was John Travers of Donore Harriers.

Two junior 4 x 100m relay teams were competing, with the girls running 44.1, a time that puts them third on the Irish all-time list. Making up the team were Molly Scott, Gina Akpe-Moses, Rhasidat Adeleke and Ciara Neville. The men also finished second in 41.32.

44.15 and a national junior record for the women’s 4×1 relay. Number 3 all-time to boot! #IFAM #oordegem pic.twitter.com/jf8tAF2oU4

Individually, Neville with a time of 11.63 and Akpe Moses who ran 11.68 both made the 100m A standard for the World Junior Championships. Akpe Moses has already run 11.46 this season.

In the 200m, Rhasidat Adeleke’s time of 23.94 was inside the European U18 standard and is also a B qualifier for the World Juniors.

At the British Milers’ Club Watford GP, Ciara Mageean of Team New Balance was a clear winner of the A 1500m race in a time of 4:09.10, not too far of the 4:07.41 she ran at the Commonwealth Games last month.

Running a personal best 3:43.24 to finish sixth in the men’s A 1500m was Kieran Kelly of Raheny Shamrock.

Winning the A 800m was Zak Curran of Dundrum South Dublin in a season’s best 1:47.86, which sees him top the current Irish rankings. In the women’s A race, Ciara Everard of UCD finished sixth in 2:05.39.

Letterkenny’s Danny Mooney missed out on a sub-four minute time for the men’s mile at the Irish Milers’ Club meet in Belfast on Saturday (May 26).

In windy conditions, Mooney pulled clear over the final two laps to finish in 4:06.88. Dan Tanui of Derry TC faded over the last lap letting Lagan Valley’s Conall Kirk though for second in 4:14.65.

Fantastic Day at the Belfast Irish Milers Meet. Well Done to Everyone Involved! Great to Win the 3000m Sponsored by @kaffeobelfast pic.twitter.com/NLWghJWwva

In the USA, Aoibhe Richardson went under 34 minutes for the 10.000m with a personal best 33:59 at the NCAA Westerns in Sacramento, California.

Clonliffe Harriers finished ninth in the men’s A division of the European Clubs Track and Field Championships in Birmingham. Best performer for the team was Jeremy Philips who finished fourth in the 100m and helped Clonliffe to fifth in the 4×100m.

In Tampere, Finland, where the B competition was held, St Abban’s from Carlow, finished fourth. Ruby Millet not only won the long jump but improved her best personal best to 6.08m, while Maisy O’Sullivan won the 1500m and was second in the 800m.

Eoin Keith proved best of the Irish at the European 24 Hour Championships in Timisoara, Romania. 26-27 May. Keith notched up a total of 232.65km for 19th place. Amy Masner finished tenth woman with 220.85km, putting her second best overall of the Irish. Louise Smart was 22nd with 204.57km while Susan McCarthy dropped out after 39.12 km. The team finished 13th.

Road result of the weekend came from Olympian Breege Connolly of Derry Spartans AC who won the Edinburgh Marathon Festival Half Marathon in a new personal best time of 76:07 on Saturday (May 26). Connolly, who will run the marathon at the European Championships in August, only caught early leader Annabel Simpson of Fife AC at the 12-mile mark on a tough course. Simpson finished second in 76:28.

Irish national marathon champion Gary O’Hanlon of Clonliffe Harriers won the Clogherhead Seaside 10km on Sunday (May 27) in 31 minutes exactly. Darragh Greene of Dunleer AC was second in 32.41 and Catherina McKiernan of MSB AC ninth overall and first woman in 37:18.

Hiko Tonosa of Dundrum South Dublin AC continued his winning streak in the KIA Race Series when he won the Bob Heffernan 5km in Enfield, Co Meath on Tuesday (May 22).

Tonosa was a clear winner of the race in 14:20 with Peter Somba of Dunboyne AC second in 14:52 and Donore’s Eric Keogh a close third in 14: 54. Una Britton of Kilcoole Ac was first woman in 17:20, followed by Sorcha Nic Dhomhnaill of Donore Harriers in 17:41 and Charlotte Kearney of Donadea RC in 17:49.

Sean McGrath and Claire McCarthy were the winners at the John Buckley BHAA 5km in Cork on Tuesday (May 22). McGrath was first home in 14:58 with Niall Shanahan second in 15:00. McCarthy, who will compete for Ireland in the marathon at the European Championships in August, finished in 16:31, followed by Aoife Cooke in 16.57.