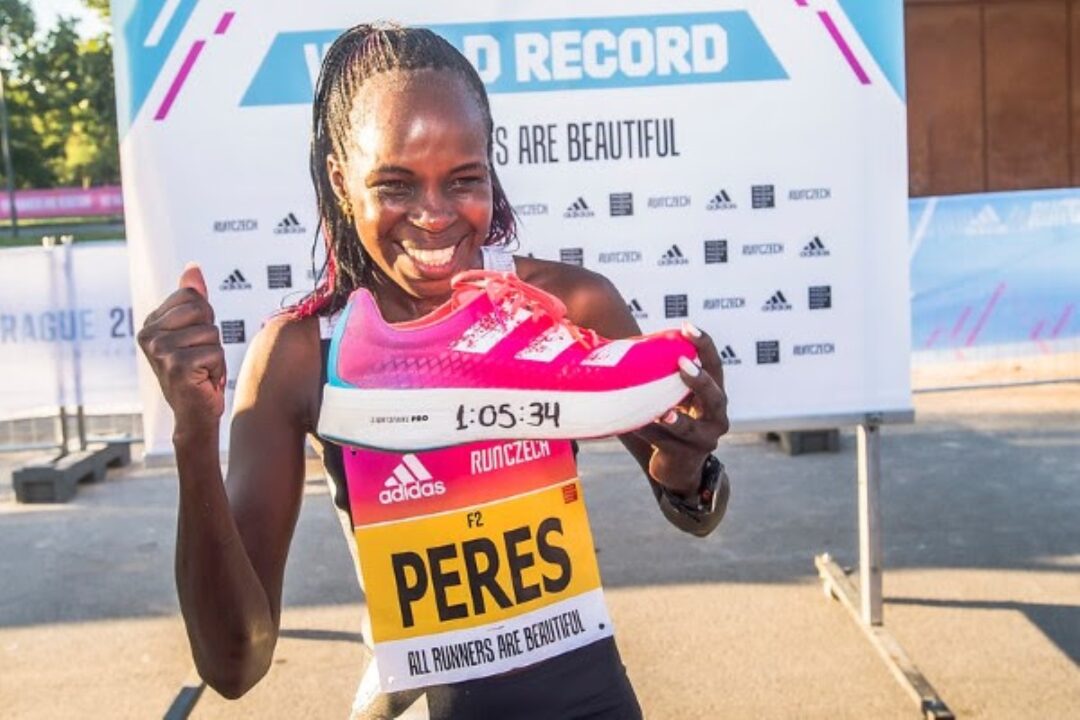 Mo Farah was in Brussels in attempt to break the one-hour world record held by Haile Gebrselassie. The record had stood since 2007 at 21.285km (13.255 miles). Going into the event, 37-year old Farah believed he was in a good place to be able to break the previous record and he was right. Sir Mo covered 21.330km, which is just under 54 laps of the track! An impressive achievement and the first world record for the four-time Olympic champion.

“An hour is long; it takes a lot of concentration and focus. After the first half I found my rythm. I’m really happy with this record!”

In Prague the women’s only half marathon word record was broken by Peres Jepchirchir – you can catch a full replay here. Running over a 1.3km loop in perfect conditions Jepchirchir clocked a stunning 65:34. The 2016 World Half Marathon Champion said;

“I am just happy and proud. Although I thought for a while that I could run at the limit of 65 minutes, I am also really happy with the time and especially the new record,”

This weekend saw British Athletics Outdoor Championships taking place. Having been postponed twice due to COVID-19, the event was finally able to take place through the enforcement of strict social distancing guidelines.

Despite the surreal environment, the event allowed athletes to get back on the track, some who hadn’t raced on the track for over a year, and put their training to the test in a championship environment.

A thrilling 800m race saw a battle right to the line. The first lap played to the advantage of favourite, Jake Wightman, as they went through the halfway point in 51 seconds. From then on Wightman led the pack. Coming around the final bend and into the home straight Daniel Rowden had put himself in a strong position to be able to execute his strong finishing kick.

British Champion! 🇬🇧🇬🇧 Grateful for all the support. It’s honestly meant the world! We thank God Onwards and upwards ✊🏽 📷 @britishathletics

The women’s 800m final demonstrated the current depth of British middle distance running. With some of the UKs leading athletes not racing it was a chance for young talent to step forwards. With 200m to go it became a battle between Ellie Baker and youngster Keely Hodgkinson.

Down the home straight Baker put in a strong surge, but it was Hodgkinson’s immense speed that allowed her to push on ahead, increasing the distance between her and the rest of the field to take the win in 2:03.24. Isabelle Boffey (Enfield) then dug deep and came across the line in second place with a time of 2:04.73 ahead of Ellie Baker (Shaftesbury).

First Senior Medal 🥉 at British Champs today! I gave it everything i had and left it all on the track! Was good to race with these lovely ladies and gain some more championship racing experience!❤️ pic.twitter.com/k5Ng0saO50

Tactical racing was to the fore in the women’s 5000m. The race went out slow with a 3:24 first kilometre, meaning everyone was in the mix at the open of the race. Leading into the 800m mark was Bronwen Owen who decided she wasn’t going to sit back and relax and began to push on the pace.

Bronwen pushed the pace until just before 4km when Jess Judd decided it was her turn to add in an extra surge to the pace. The lead group then narrowed down to just Judd, Verity Ockenden and Amelia Quirk. With just 400m to go Judd showed the 1500m speed we know her to hold by pushing out a 63 second last lap.

After crossing the line, Taunton said: “It was good but very hard running on my own out there. But I really enjoyed the experience as it was my first one [British Champs]. It is so special to get a T20 world record. When I came into this race, I thought about how a few years ago I just wanted to run on a track 5k and now I am here at the British Championships.”

The men’s 5,000m saw recent 5k Road British record holder Marc Scott toe the line, alongside the likes of Jake Smith and Jonny Davies. It wasn’t long into the race before the field began to spread out with Smith making it an honest race and pushing the pace on.

Midway through the race, Scott put the other athletes to the test as he put a 20m gap between him and Jack Rowe in second place. He managed to keep the pace all the way to the line as he crossed in a time of 13:32.98 to crown himself British Champion. The silver medal was claimed by Rowe of AFD in 13:37.85 followed by Tom Mortimer (Stroud) 13:43.47.

For the men it was another tactical race. The pace was slow  o start with a 68 second first lap. The field stayed close to one another which saw many athletes at risk of being boxed in or running in lanes 2 and 3. However, with 600m to go Neil Gourley came to the front of the field and began to wind up the pace. It was, however, indoor 800m champion, George Mills who had placed himself perfectly and managed to give an extra kick coming down the finishing straight to overtake Gourley and claim the gold.

In the women’s 1500m, it was Laura Weightman who showed her class, taking home her 5th British Champs title. The race was tactical, with Jess Judd picking up the pace with 2 laps to go. It was in the last 300m that Laura Weightman pushed the accelerator and proved her strength. She crossed the finish line in 4:09.76.

After achieving her first ever senior British title in the 5,000m yesterday, Jess Judd came back and attacked the 1500m. She wasn’t to be dismissed as she crossed the line in 2nd place with a time of 4:12.35. What an incredible achievement! After a long journey back from injury, Katie Snowden regained her form and came in third after a strong race. The Herne Hill athlete stopped the clock on 4:14 dead.

Several of Britain’s best known endurance talent raced overseas this weekend away from the champs.

At the Meeting de Marseille, Team Young once again proved their strength with both Laura Muir and Jemma Reekie setting meet records over the 800m and 1500m respectively. Muir once again ran herself to a clear win in 2.00.16, over 1 second ahead of second place. The second British athlete across the line, in fourth place, was Adelle Tracey with a solid time of 2:01.86. In eighth place was Shelayna Oskan-Clarke in a strong 2:04.54.

Similarly to Muir, in the 1500m, it was Reekie who ran an impressive, yet close race, to take the win in 4:02.20 ahead of Claudia Bobocea. Eilish McColgan was fourth in her third race of the season with a strong 4:05.59.

In the men’s 800m race, GB’s men came to the fore. Behind Ferguson-Cheruiyot Rotich, in second place, was Elliot Giles. It was a close race between Rotich and Giles, but the British athlete wasn’t far behind. Giles crossed the line in 1:44.68, just 0.34 seconds behind the winner. Guy Learmonth was second Brit and third overall in a strong 1:46.57. Phx Trk athlete, Kyle Langford was 7th in 1:47.55. In the 1500m Piers Copeland set yet another stunning PB with 3:37:00 in the 1500m.

In Poland, both Eilish Mccolgan and Laura Muir battled it out over the 1500m distance, but we are awaiting results.

3 PBS from 3 races, good start to the season and now time to build on it! https://t.co/fsQbI7aYdf

Back on home soil

Over the slightly longer distance of… 100 miles was the Centurion Thames Path 100. The race runs along the Thames Path from Richmond, London to the centre of Oxford and includes a total of 1900ft of climbing. This year athletes were set off on a scattered start over 2 hours.

The quickest overall finisher was Russell Arnold, who clocked 14 hours 13 minutes and 40 seconds! For the women’s event, it was Samantha Amend who was first with the GB ultra runner clocking an impressive 16 hours 28 minutes and 8 seconds.

A big well done to our men’s & women’s winners of this years Thames Path 100:

Runthrough were back in action with their event in Battersea Park this weekend. Taking the 10km win with an impressive finishing time of 30:48 was Matt Dickinson of Clapham Chasers. Dickinson’s time was a huge 40 second personal best!

It was the 5km though which saw some very impressively fast times with strogn depth. For the men the top three finishers all managed well under the 15-minute barrier. It was Crawley AC’s, James Westlake, who managed to take the win with a solid 14:29! That is a whole 12 seconds faster than his previous lifetime best.

Following behind Westlake was Kevin Moore of Brighton and Hove AC in 14:39. Moore also had a previous best of 14:41, so managed to narrowly dip under it to set a new PB. Joshua Burgess of Lewes AC was third in 14:52. The mass turnout of AB Training Group athletes saw 12 men run sub 16 minutes. Georgia Bell took the win in the women’s event with a solid 16:34, also her 5k debut. Second place went to AFD athlete, Laura Gent, in a season’s best time of 17:02, followed by Laura Boehm in 17:17. The women’s field was equally strong with 16 women running under 19 minutes.

Tooting Bec 3000m took place mid week. The event seeded people according to time and saw some speedy times. The winner, Dominic Nolan (Croydon), crossed the line with an impressive lead. He stopped the clock on 8:27.48, ahead of Dulwich’s Jack Ramm who ran 8:43.97 for second place. It was Edward Chuck, also of Dulwich, who came in third with a solid time of 8:46.15.

The first woman to complete the 7.5 lap distance was Leah Harris of Worthing. Harris knocked 5 seconds off her personal best, setting a new time of 9:42.78. Shortly behind in 9:48.11 was Katie Olding of Thames Valley Harriers. Third place was secured by Arena80 athlete, Caroline Hoyte in 10:18.98.

A 5k, 10k and half marathon took place at Dorney Lake catering for plenty of athletes. There were some speedy times ran over all distances, however the course measurements were questionable as the course had to be redirected to be made safer.

The 5k event saw Alex Miell-Ingram take the win with a strong time of 15:29. It was James Maloney who took second place with 15:32, followed by Neil Kevern in 15:35. For the women, it was Vicki Taylor who ran herself to the top of the podium with a time of 18:37, followed by Zoe Weiler and Bea Lafreniere in 21:14 and 21:42 respectively.

By a significant margin, Ben Kruze took home the win in the 10k event with a solid 32:33, almost 2 minutes ahead of second place. Helen Pool was the winner of the women’s race in 42:09.

The half marathon distance saw Naomi Mitchell of Reading AC run a glorious race to take the win, also placing her joint 3rd overall. Mitchell crosses the line in an impressive 1:16:53. The winner of the men’s race in 1:15:04 was Chris Mullin.