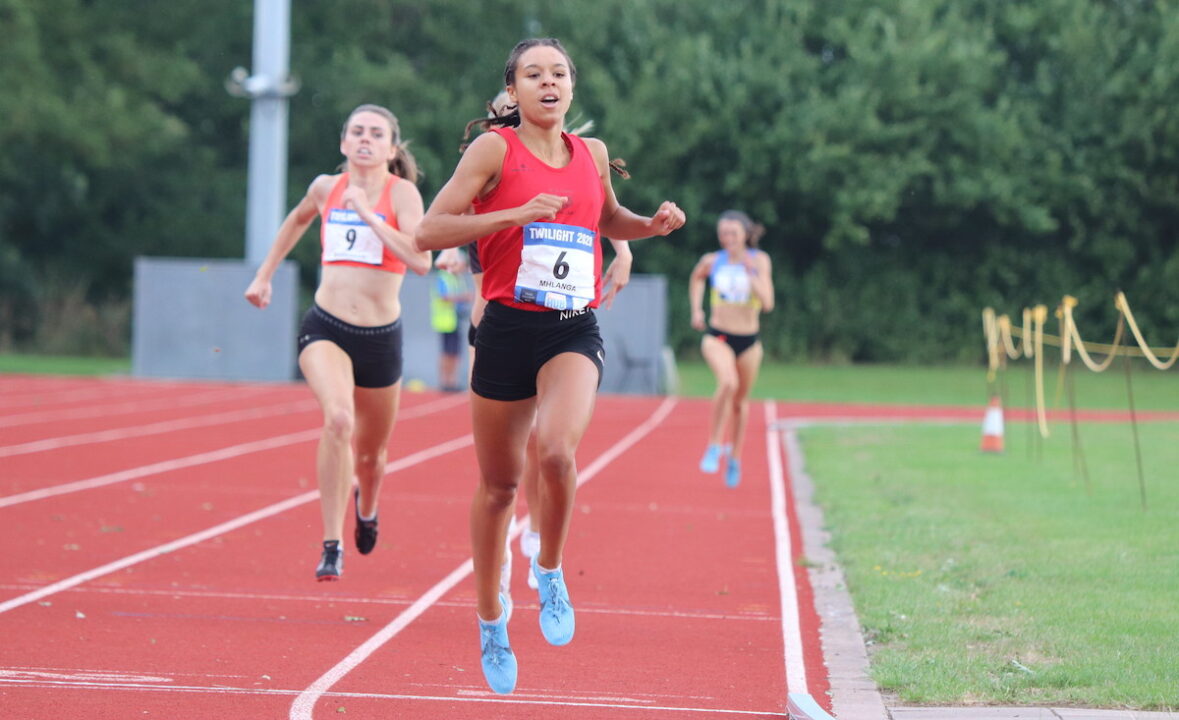 This weekend was yet again another astonishing one in the athletics world with records and PBs being broken across age groups. SOAR Running and Hannah Irwin bring you the details.

This week marked the fastest Friday in the UK for over five months. Athletes from all over the country took to Milton Keynes for the MK5K and Kent for the Bromley Twilight Invitational and battled it out, not only against one another, but also against the brutal wind brought by Storm Ellen.

In Milton Keynes, at the Results Base MK 5km PB Special some speedy British athletes took to the paths around Willen Lake to test themselves over the 5k distance. Despite the wind, they didn’t waiver and gave some gutsy performances nonetheless.

The UK Endurance Conference Elite women’s A wave race saw the return of recent 15:45 runner, Bronwen Owen. The athlete who trains alongside Beth Potter in Leeds, took to the front of the group from the outset.

After putting in a speedy first kilometre to get the upper hand on the wind, the tricky conditions meant times were slower than athletes had hoped.

Owen crossed the line just under 16-minutes in 15:55 with an eleven second lead on Eleanor Bolton. The Ribble Valley Harriers athlete was joined by Hoka Athlete, Claire Duck, for the majority of the race.

Duck clung onto Bolton and it was at the end that Bolton took second place with 16:06 followed by Duck in 16:09. Fourth place went to Izzy Fry in 16:17 after a very strong race. (Editors note – our humbled writer Hannah Irwin finished 5th with the only PB of her wave – 16:21). For the In the Fast Running Elite Men’s A Wave, the winner too was decided early on as Omar Ahmed went out hard in order to gain some time before being struck by the wind in the latter part of the race.

He stuck at the front, crossing over the finish line with an impressive time of 14:06. In second place was Bedford & County AC athlete, Dan Jarvis, who finished with a fine time of 14:14.

The third fastest time of the night was clocked by Henry McLuckie of Shaftesbury Barnet Harriers in 14:19. Thanks go to Elliot Hind, Paul Mizon and Mick Bromilow for organising such a safe, well-organised and exciting event for all the athletes who took part.

There were 28 waves in total with some fine performances throughout the full results can be found here. Atkin sets PB in US as athletes fly ing Bromley

The speedy racing didn’t stop there. In Kent the Bromley Twilight Invitational saw the likes of Marc Scott and Jess Judd take to the track. Mark Hookway who organised the event and the night was definitely one filled with personal bests.

May never again get to 22nd August in a Summer and see a men’s outdoor 3000m world list looking like this 😂 … pic.twitter.com/ybrTDE7Jmu

The women’s 3000m race was hot in competition as all top three finishers clocked personal bests. Amelia Quirk made her debut for the season in style with an impressive 17 second PB of 8:54.09 which earned her the win. Second place was secured by Verity Ockenden with a fine run of 8:56.72, also a PB by 14 seconds! It was Tonbridge’s Nicole Taylor who came in third in 9:12.18.

The 1500m event was won with a clear margin by GB international, Jess Judd. It was Judd’s first outing over the distance, and she clocked 4:10.03 for the win. In second place was Beth Kidger of Brighton Phoenix in 4:15.22 followed by Sabrina Sinha (Cambridge Harriers) in third in a PB of 4:16.71.

For the men, the 1500m title was secured by Adam Clarke in a strong time of 3:41.57. In a tight race to the finish, it was Tom Dodd of Birchfield Harriers who knocked a second off his previous best time to finish second in 3:44.25. Ian Crowe-Wright took home third place in 3:44.69.

Lay and Mhalanga with fine displays in 800m

The 800m races at the Bromley event saw plenty of PB’s. The win in the men’s race went to Josh Lay (Rugby & Northampton) in a lifetime best time of 1:46.78, which is over a second faster than his previous time. Alex Botterill was second by a minute margin, also with a PB of 1:46.82. The third fastest time of the night was run by Yusuf Bizimana, which was also a PB. Bizimana crossed the line in 1:48.18.

In the women’s 800m A race, Issy Boffey of Enfield & Haringey took the win with an impressive PB of 2:02.10, however, it was B race winner, Khahisa Mhlanga, who ran the fastest time on the night was an incredible 2:01.91. Taking to the track to compete over the 800m distance for the first time in 2 years was Katie Snowden.

The Herne Hill athlete clocked 2:02.40 for second place in the A race. Third place finisher in the A event was Katie Kirk (Ulster Uni) in 2:02.98. Recent BMC winner, Georgie Hartigan, came second in the B race with a best time of 2:02.99 followed by Louise Shanahan (Cambridge) in 2:03.17, also a lifetime best!

This weekend at the Irena Szewińska Memorial in Bydgoszcz, Poland, Great Britain’s elite were out in full force with some impressive performances. For the middle-distance runners, it was the women’s 1500m that got the evening off to a rapid start. One of GB’s golden girls of the track, Jemma Reekie, proved her strength once again.

Reekie, the double European U23 champion, who clocked 2:31.11 in the 1000m in Monaco on Friday, ran 4:09.01 in the 1500m to claim victory at the World Athletics Continental Bronze event in Poland. She claimed a convincing win, finishing over 2 seconds ahead of Germany’s Caterina Granz. Fellow Brits, Amy Griffiths and Erin Wallace were also competing in the race and finished fourth and fifth respectively. Griffiths crossed the line in 4:12.38 and Erin Wallace earned herself a new personal best of 4:12.57.

The next event of the night to have British athletes competing in, continued the winning streak. Elliot Giles set off with intent in the men’s 800m and crossed the line in an incredible first place with a rapid time of 1:45.18, not far off his PB time. It was his training partner, and fellow Phx Track athlete, Kyle Langford, who was the next Briton in sixth place with a time 1:46.45. Langford was then followed by Guy Learmoth in 10th place with a strong time of 1:47.21.

It was the women’s 800m event that had spectators sitting on the edge of their seats in what was an incredibly close race. The top seven athletes all finished under 2:01, but it was Benin’s Noélie Yarigo who took home the win in 2:00.11. For the British athletes, Laura Muir was first across the line in 2:00.34 for third place, just after setting her national 1000m record in Monaco. Alex Bell finished in fourth place, just behind Muir in 2:00.34! A very close race!

The last track event of the night, which saw records being broken was the men’s 2000m. Britain’s U23 athlete, Piers Copeland, finished fourth in 4:57.61. This time not only classifies as an U23 national record, but also places Copeland seventh on the UK all-time list. Sol Sweeney of Great Britain was eighth overall in a time of 5:06, which is also a PB!

The weekend was rounded off with the Stockholm Diamond League which saw plenty of our country’s best tear up the track with some speedy performances. Laura Muir produced a stunning display to set a world leading time of 3:57.86. In form form as well ahas been Laura Weightman who finished 2nd in 4:01.62 ahead of Melissa Courtney-Bryant setting a new PB with 4:01.81 and Eilish McColgan 4th in 4:03.74. Stunning racing.

On the road again

The St Albans 10k also saw the return of athletes to the road over the longer 6.2-mile distance. Ollie Garrod of South London Harriers took home the win in 32:02 ahead of Oliver Carrington (Newark AC) who crossed the line in 32:11. The third-place finishing male was Ben Brown (Southampton AC) with a solid time of 32:15.

For the women, it was Hannah Rayden (St Albans AC) who ran an astonishing time of 33:36, almost 4 minutes ahead of second place. Alex Newman-Smith was the second female home in 37:29 followed by Samantha Amend (Belgrave Harriers) in 38:13.

The SOAR Running Weekend Roundup
The Irish round-up is back