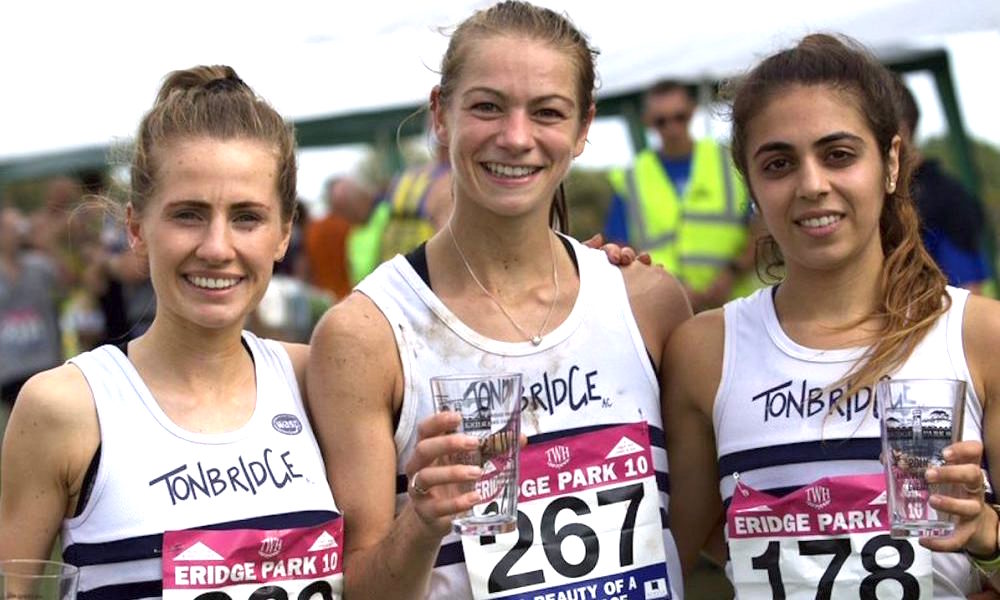 British athletes give their all at the iconic half marathon, while elsewhere this weekend runners impress in Eridge, Swindon and Stirling.

Meanwhile were some scintillating performances behind Farah, though, with the fourth to 10th men and the 6th to 10th women all proving that the state of the UK’s endurance running scene is in fine health.

Hayley Carruthers, who spoke to Fast Running recently about her incredible year, continued her astonishing rise up the elite rankings with a second place behind Mitchell in the UK results. Lily Partridge, Aly Dixon and Charlotte Purdue were slightly below par in third, fourth and fifth respectively. Here are the rest of the top UK women’s performances:

Although the full results were still being compiled, the winner of this challenging off-road race was confirmed as Lucy Reid from Tonbridge AC! The Durham University talent not only beat off all her male rivals but scored a course record to boot, crossing the line in 67:04.

Not only that, but the second athlete to cross the line was also female, with Reid’s club mate Nicole Taylor taking the second prize in 68:47.

Tunbridge Wells Harriers’ Billy Hobbs was the first man across the line and third overall in 69:54.

Matt Clowes blew his rivals away when he won by a massive four minutes and 19 seconds on the streets of Swindon (September 9th). The Cardiff speed machine is in the form of his life, and would surely have challenged his 64:38 PB if he had had stiffer competition at the Wiltshire event.

The only blip on the sports therapist’s racing CV this year has been a below par performance at the London marathon. However, much credit must go to Clowes for finishing the race when many others of his standard would have pulled out for fear of having a time that does not reflect their ability on their Power of 10 profile.

The Cardiff man will now look to getting himself into even better shape for the forthcoming Commonwealth Half Marathon Championships in his adopted home town in October.

Trailing in Clowes’ wake were Swindon Harriers’ Ben Cole and Team Bath’s Dan Jones, whose times of 70:19 and 73:39 earned them the second and third spots respectively.

Also impressing at the sharp end was Tiverton Harriers’ Serane Stone. The Devon athlete makes a habit of winning races and kept up that form by taking victory here in 82:39.

Cheltenham & County Harriers provided the final two places on the podium, with Fee Maycock and Tara Grosvenor’s times of 84:27 and 84:58 ensuring this event maintains its fast, competitive reputation. Dundee Hawkhill Harriers’ Kristian Jones was a classy winner of this classic race (September 9th), taking the title in a sizzling 29:56, almost a minute ahead of his nearest rival. Cambusland Harriers’ Grant Sheldon and Kilbarchan AC’s Euan Gillham were just seconds apart in second and third with fast times of 30:46 and 30:48.

The women’s race was also incredibly competitive, with Shettleston Harriers’ Fionnuala Ross just seconds off her PB with a scintillating 34:05 result.

Fife AC’s Steph Pennycook also shattered the 35 minute barrier with a 34:38 result in second, while Lothian’s Jo Williams wasn’t far off her best with a 35:43 result in third.

Charnwood’s ever green talent Anne Holyland showed her class in the Midlands city (September 9) when she took the win in her first 10k for two years in 37:34. The V35 ace owns a 35:49 PB over the distance along with a 2:49 marathon best. She beat off competition from Barrow Runners’ Amber Lester (38:01) and Derby’s Veleska Wills (38:35).

The home city provided the men’s winner when Leicester Coritanian’s James Short took the title in a PB 33:26. James Short took the win in a PB at Leicester

Short was ahead of Bedford & County’s Stephen Headley’s 34:36, also a lifetime best. V40 athlete Matt Pyatt showed he has no intention of slowing down as he finished third in a strong 35:15.

Long-term friends and racing adversaries, Jonathan Escalante-Phillips and Chris Darling, both of Cambridge & Coleridge and coached by Mark Vile, fought it out for victory once again, with the former easing away to take the title in 33:16 from Darling’s 34:05 (September 9th). We spoke to another of Vile’s athletes recently, Charlie Christensen, about her impressive performances this year.

Escalante-Phillips is in sparkling form at the moment, recently winning the Hercules Wimbledon 5000n title in a PB 14:11.29. Darling is also in the shape of his life, scoring PBs at every distance he’s contest this year apart from 10k.

This hidden gem of a race takes place around the stunning Lake Vyrnwy and consistently produces very fast times. This year’s event was no different.

Super veteran Stuart Hawkes from Tipton Harriers annihilated his PB when he ran a superb 66:44 to slice nearly two minutes of his previous best! The reigning Brighton marathon winner is proving age is just a number with PBs at 3000m, 5000m, 5k, 10k, the marathon and now the half to his name this year. Hawkes beat off Fast Running’s Class of 2018 star Ben Fish, who ran 67:03. That time would guarantee victory in most half marathons across the UK, and was still 90 seconds ahead of third placed Callum Rowlinson, who ran 68:36 to earn himself a big PB of more than a minute and a half.

The women’s race was a similarly speedy affair, with the first two ladies beating the 78 minute mark and separated by a mere second on gun time (their chip times were identical)!

New Marske’s V50 Kay Neesam stole the show at this pre-Great North Run event on Teeside when she beat off all her competition with a win and a superb age graded time of 39:10! The 50 year-old is unsurprisingly in the top 10 in her age category for almost every distance, and seems to be getting faster!

Her team mate and fellow veteran, V45 Ella Towers took the runner up spot in 40:23, ahead of Tyne Bridge’s V40 was third in a season’s best 40:37. Well done to these superb masters athletes!

Unattached runner Olgar Pederson was the Great Tees 10k’s overall winner in 33:46, way ahead of second placed Andy Chadfield from Billingham, who posted a 35:16 result. Fellow V40 Jason Cutler from Stockton Striders was third in 36:25.

Vale of York Half Marathon

This year’s event saw a hard fought win for Sunderland Harriers’ Kev Jeffress, who snatched victory from New Marske Harriers’ Lewis Gamble-Thompson by just seven seconds! The title was won in 71:49 to 71:56, while Elvet Striders’ Stephen Jackson was just four second behind in 72 minutes – what a race!

Rotherham’s consistently excellent Sarah Lowery continued her fine form over the half marathon distance with another win in York in 79:56. Sarah Lowery was in winning form again at York

She was streets ahead of her nearest rival, with Lavender Coaching’s Lucy Biddlestone second in 82:01, while Julie Warner was third in 83:49.

Altrincham & District’s Mo Aburezeq was a runaway winner of this Salford event, taking the win in 32:18. Some way behind were Chris Gidlow and Matthew Hallam, who enjoyed a close fought race, crossing the line in 33:43 and 33:46 respectively.

Finishing a distant second was Sarah Saxton in 40:36, while Laura Brown’s 41:29 was good enough for third.

On Saturday in Prague, Emelia Gorecka clocked 33:41 to finish 10th on her road 10k debut. Meanwhile, in the men’s race, Ross Millington finished 16th in a personal best 28:40, which is the third fastest time by a British athlete this year.

Luke Traynor, the second fastest GB athlete in 2018, crossed the line in 18th running 29:22. The full report from Prague can be found here.

Jonathan Poole and Amy Clements ran the fastest times at parkrun events across the UK this weekend. Poole ran 14:52 at Gunnersbury parkrun, while Clements posted a time of 16:57 at the Dulwich parkrun.

The top 10 parkrun times can be found here.