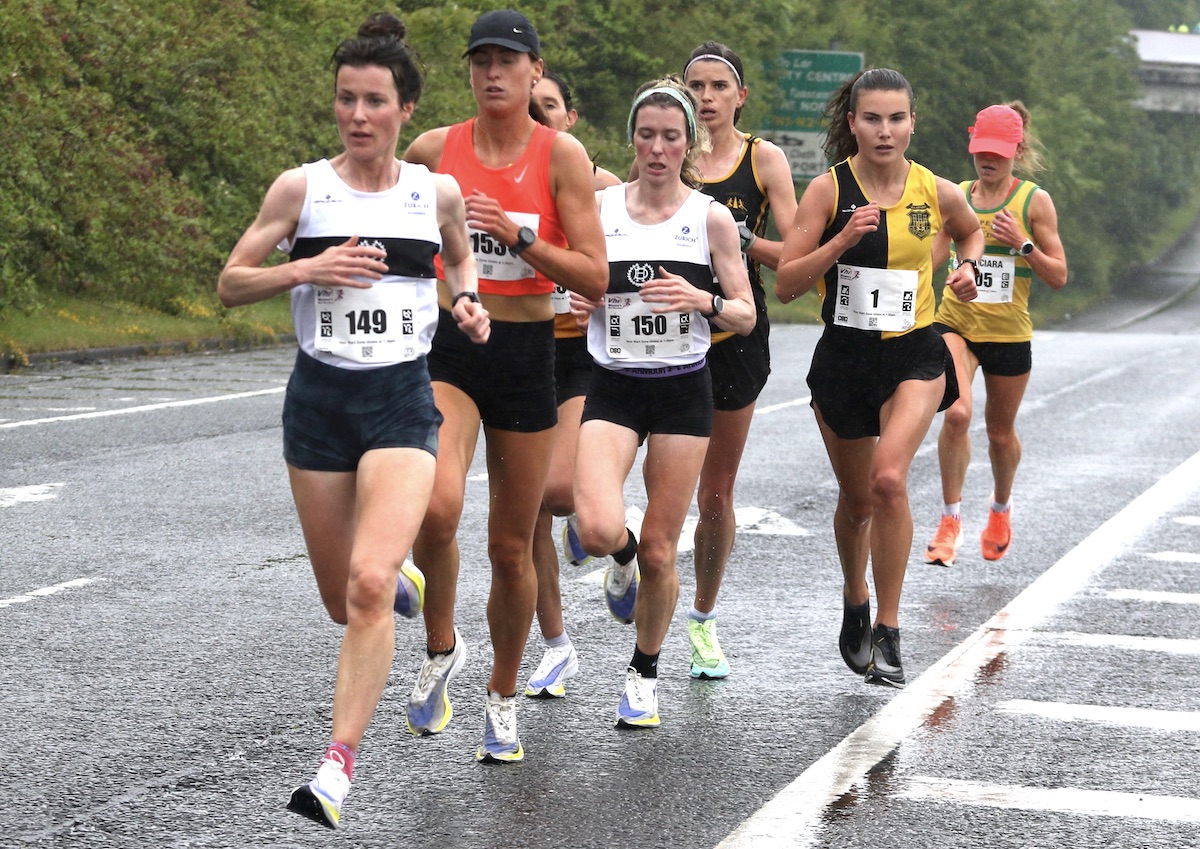 On one of the biggest weekend of the year for road running in Ireland, thousands turned out for the Dublin Women’s Mini Marathon and for the Cork City Marathon

In Dublin, the Women’s Mini Marathon, first held in 1983, was celebrating its 40th anniversary race and its first “actual” race after a two year break when lockdown forced it online and virtual.

It provided the finish of the day, with Aoife Kilgallon of Sligo AC the winner from Sorcha Nic Dhomhnaill of Donore Harriers with both women timed at 33 mins 7 secs. Third in 33:26 was Sorcha’s sister Ide, while fifth was Nakita Burke of Letterkenny AC in 33:49.

Sorcha had pushed the pace from the start with Kilgannon tucked in behind her and Ida, along with the 2019 winner Aoibhe Roichardson of Kilkenny City Harriers and Leevale’s Sinead O’Connor also in the leading pack at the halfway point.

Over the second half of the race, Olympic steeplechaser Kerry O’Flaherty of Newcastle and District AC pulled up on the leaders and would finish fifth overall and and first woman over 40 in 33:50. Both Richardson and O’Conner fell back in the latter stages of the race with O’Connor finishing sixth in 33:56 and Richardson eighth in 34:13. Seventh in 34.00 was Catherine Mullen of Metro St Brigid’s AC.

In the Dublin championships, held for the first time in conjucntion with the race,the Nic Dhomhnaill sisters were first and second and Mullen third. With Niamh Clifford in 23rd position making up the team, it also looks like Donore took the team title, although this is yet to be confirmed.

In the age categories, Natasha Adams of Letterkenny AC was first W45 ahead of previous mini marathon winner Maria McCambridge of the host club Dundrum South Dublin AC. First W50 was Mandy Farrelly in 40:36, and fastest in the W55 category was mini marathoin regular Niamh Richardson of Kilkenny City Harriers, mother of Aoibhe.

Former Irish marathon champion Christine Kennedy of Galway City Harriers was first W65 in 42:46 – a time which would also have won the W60 category. Fiona Kirwan of Raheny Shamorck was first W60 in 48:28. That was as high as the age categories went although there were notable runs from two over 70 stalwarts of the Irish running scene – Phyllis Brown of Star of the Sea AC who happens to be Christine Kennedy’s sister who finished in 53:07 and June Comiskey of Raheny Shamrock in 54:19.

Leading everyone home in a time of 28 mins 29 secs was 18-year-old wheelchair Paralympian Shauna Bocquet of Craughwell AC who was defending the title she won in 2019. Winner of the visually impaired category was Niamh Delaney in 57:42.

Brighton AB Training Group won the relay with a time of 2:14.03.

In the men’s race, O’Donoghue, who had pushed the pace from the start, was leading at halfway with a time of 69 mins 8 secs. Second at that stage was 69:40 was Pawel Kosek while third was Gary O’Hanlon of Clonliffe Harriers in 71:39.

O’Donoghue pulled away in the second half of the race for a clear win; Kosek was home in 2:22.39, whiel for third place, Alan O’Shea of Bantry AC cuaght O’Hanlon to finish third in 2:24.45.

In a good day for Dublin club athletes, Sorcha Loughnane of Donore Harriers was second woman in 2:45.12, followed by Aoife O’Leary of Sportsworld AC in 2:56.40.

Jake O’Regan won the half marathon in 64 mins 4 secs, with Peter Somba of Dunboyne AC, running his second race in three days, finishing second in 68:10 and Shane Collins of Leevale AC third in 71:00.

Courtney Maguire of Clonmel AC was first woman in 79:22, with Catherine Thornton of Crusaders AC second in 80:31 and Niamh Moore third in 81:23.

On Saturday (June 4), Danny Mooney of Letterkenny AC was the winner of the Donegal Airport Runway 5km in 15 mins 14 secs. Declan Feery of Rosses AC was second. Road racing continues apace in Co Donegal with sixteen races held in the month of May alone.

The Washingbay Green Half Marathon

In Coalisland, Co Tyrone, Gary Morrow of Willowfield Harriers won the Washingbay Green Half Marathon, also on Saturday, in 74 mins 4 secs. Joanne Taggart of Sperrin Harriers was first woman in 95:54. Mindaugas Balciauskis of Monaghan Town Runners AC won the 10km in 33;14; Gemma McDonald of Ballycastle Runners was first woman in 40:26. Winners of the 5km were Gavin Corey in 15:32 and Dearbhla Cox of Annadale Striders in 18:08.

Winner of the Patrick Bell/Nicky Phillips Memorial 5km, in Bohermeen, Co Meath on Friday evening was Ian Guiden of Clonliffe Harriers in 14 mins 17 secs. Peter Somba of Dunboyne AC was second in 24:26 and Conor Duffy of Glaslough Harriers third in 14:27.

On the same evening, Noel Murphy of Waterford AC was the winner of The Deadmans 4 mile, raced three of the Outfields Sports road race series organised by Carrick-on-Suior Runners. Murphy finished in 20 mins 55 secs; first woman was Dymphna Ryan of Dundrum AC (Tipperary) in 23:02. All Ireland Schools track and field

Sean McGinley of St Eunan’s Letterkenny was just one of the stars on a packed day of action at the All-Ireland Schools Track and Fields Championships held in Tullmore on Saturday (June 4).

McGinley won the senior boy’s 2000m steeplechase comfortably in a time of 6 mins 2.87 secs. After a few hours rest, he went on to take the 1500m title after a battle all the way with Jack Fenlon of Col Iosagain Portarlington, with the pair timed at 3:58:17 and 3:58.64. Third in 3:59.97 was Scott Fagan of Castleknock Communite College.

The senior 5000m saw another close run battle with Diarmuid Fagan of Col Mhuire Mullingar winning in 15:18.10 and Jonas Stafford of East Glendalough edging out Oisin O Muiri of GC Chiarrai for second in 15:18.50. O Muiri’s time was 15:18.53.