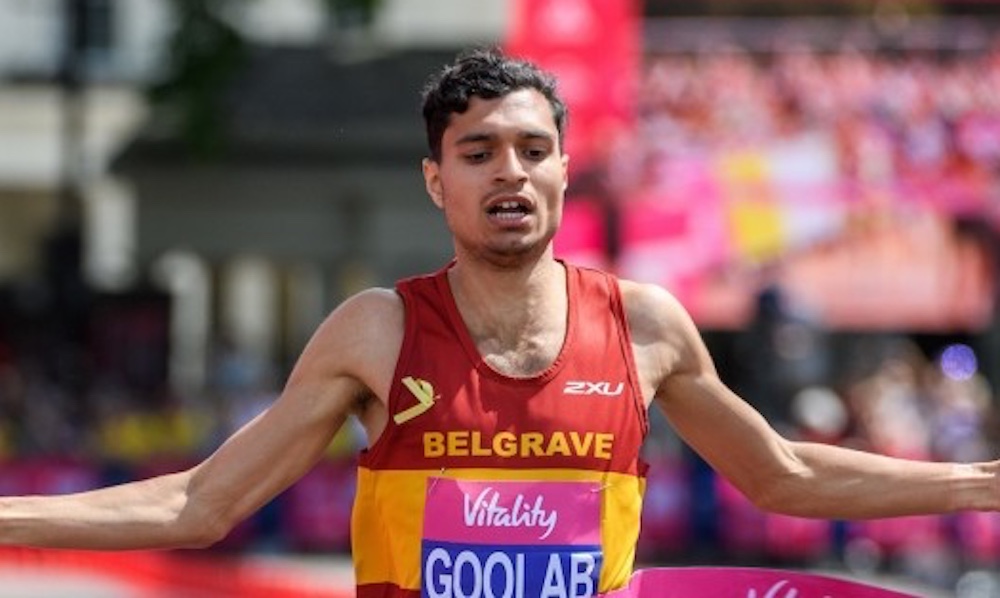 Steph Twell and Nick Goolab were the stand out British performers at the Great Manchester 10k, although it was African athletes who dominated the podiums on Sunday (May 19).

There were also fine performances at the Manchester Half Marathon, the Caerphilly 10k, the Babcock Dumbarton 10k, the Sutton 10k, Race the Train in Norfolk, the Woodbridge 10k, the Chester Half, the City of Gloucester 10k, the Bognor 10k, the Hook 10M and the Down by the River 10k.

Leigh Harriers’ Lauren Heyes (nee Howarth) was a fantastic second Brit in seventh with a very encouraging 33:17, her fastest 10k in seven years.

Lauren chatted with Fast Running last year about her past struggles with RED-S and her determination to return to a high level of fitness while maintaining a healthy bone density.

It’s great to see this smiley, hugely enthusiastic GB ace – who recently won the Manchester Half Marathon – competing with the very best once again. His time was just 20 seconds off his PB (not a bad effort on a course not known for its speed) and comes after a string of outstanding performances on the roads over 5k, 10k and the half marathon.

Leeds City’s young speedster Emile Cairess was a superb 6th overall and second Brit in 29:08, while Southampton’s Alex Teuten was also well under 30 minutes with a 29:37 result.

The Manchester Half Marathon saw wins for Carl Hardman in 69:18, while Carl Moulton took the runner’s up spot in 71:53 and Craig Pilsbury third in 72:22.

It’s always great to see Cardiff AC’s Matt Clowes racing the roads, mainly because the popular Staffordshire man is never seen without a huge smile on his face!

It was business as usual for Clowes here at the Caerphilly 10k on Sunday (May 19) when the road running specialist took victory in a strong 30:22 from club mate James Hunt’s 31:09. Shaftesbury Barnet’s Rachel Felton is another popular figure on the British racing circuit and here notched up yet another win in 35:01. Cardiff’s Lucy Marland was second in 36:44 while Swansea Harriers’ Alaw Beynon-Thomas took third in 38:00.

In London 17,000 runners hit the streets for Hackney Half Marathon. Hercules Wimbledon’s Jonathan Cornish was in a good battle with Austin Roth and George King but stretched away in the last 4 miles to win in 66:58. 2nd was Roth in 67:25 with Winchester’s George King 3rd in 67:54, with a strong run from Robel Bahelbi in 4th with 68:18.

In another top class event, internationals Luke Traynor and Fionnuala Ross won the Babcock Dumbarton 10k on Thursday (May 16).

The Sutton 10k in Cheam saw wins for Andrius Jaksevicius and Lisa Rooney on Sunday (May 19).

Jaksevicius won a hard fought battle with Stephen Blake, their times 32:27 to 32:31 respectively. Paul Prothero was third not too far behind in 33:02.

The Norfolk branch of the Race the Train ‘themed’ events (the more famous version being held in Mid-Wales every August) sees runners trying valiantly to beat the train from Aylsham to Wroxham.

While it is unclear whether anyone achieved this mean feat, we know for certain that Ipswich Jaffa’s Adam Wade won the race against his human competitors, completing the 8.9 miles in 51:49 on Sunday (May 19).

The Woodbridge 10k in Suffolk has form for attracting fast runners to the home of the town’s ‘Shufflers’, with wins and top runs in previous years from England international Aaron Scott and top endurance ace Tom Fairbrother.

This year’s event was no different, with elite marathoner Helen Davies from nearby Ipswich Jaffa taking the women’s title in 34:27, finishing third overall. The next woman to cross the line was Rebecca Smith in 40:36, while Ipswich Harriers’ teenager April Hill took third in 41:48.

The Chester Half Marathon (May 19) was another happy hunting ground for Altrincham & District’s Mo Rezeq, who won yet another title here in a fast 64:28.

Such was his dominance the second man didn’t cross the line until nearly five minutes later, when Blackburn Harriers’ Ben Fish – a Fast Running Class of 2018 member – clocked a still strong 69:27 result.

Hinckley’s Simon Birch was third in 70:38 in a very strung out race.

Super vet and prolific racer Kirsty Longley from Liverpool Pembroke & Sefton AC was first across the line for the women in 79:03, with Wakefield Distrcit H & AC’s Julie Briscoe never far behind in 79:46.

St Helen Sutton AC’s V35 Gemma Connolly made it a much closer affair for the women’s podium when she clocked 79:55. Go the veterans!

The City of Gloucester 10k saw a star turn by multi-Olympian mega star Jo Pavey, the Exeter Harrier ace finishing fourth overall in 34:39 in this popular race for top elites. Also running well was Kate Malthy with a 36:29 result, while Emily Chandler completed the top three in 40:27.

Harry Bishop took the men’s top prize in 32:20, ahead of Cheltenham & County Harriers’ Charlie Jones. Marcus England was third in 33:06.

The Bognor 10k was won by Chichester’s James Baker and Worthing & District’s Helen Buller on Sunday (May 19).

Baker’s time in victory was 33:23 from club mate Will Boutwood’s 33:27. Completing a tight top three was Worthing & District’s Jamie Corbett in 33:38.

The Down by the River 10k (we hope this is a Bruce ‘The Boss’ Springsteen inspired race name!) in Glasgow saw a 1-2-3 for Cambusland Harriers’ men, with Fraser Stewart winning overall in 31:49.

The first lady was Giffnock North’s V50 ace Mary McCutcheon, who clocked a strong 39:35, with Cambusland Harriers’ Kirsty O’Brien second in 42:02 and Deborah Comer third in 42:25.

The Hook 10M road race saw another event’s men’s podium interrupted by a stand out female performance on Sunday (May 19).

Wood spoke to Fast Running recently about her issues with food and exercise, have a read here to see how far she’s come. Find out what their times were and who else made our top ten here!