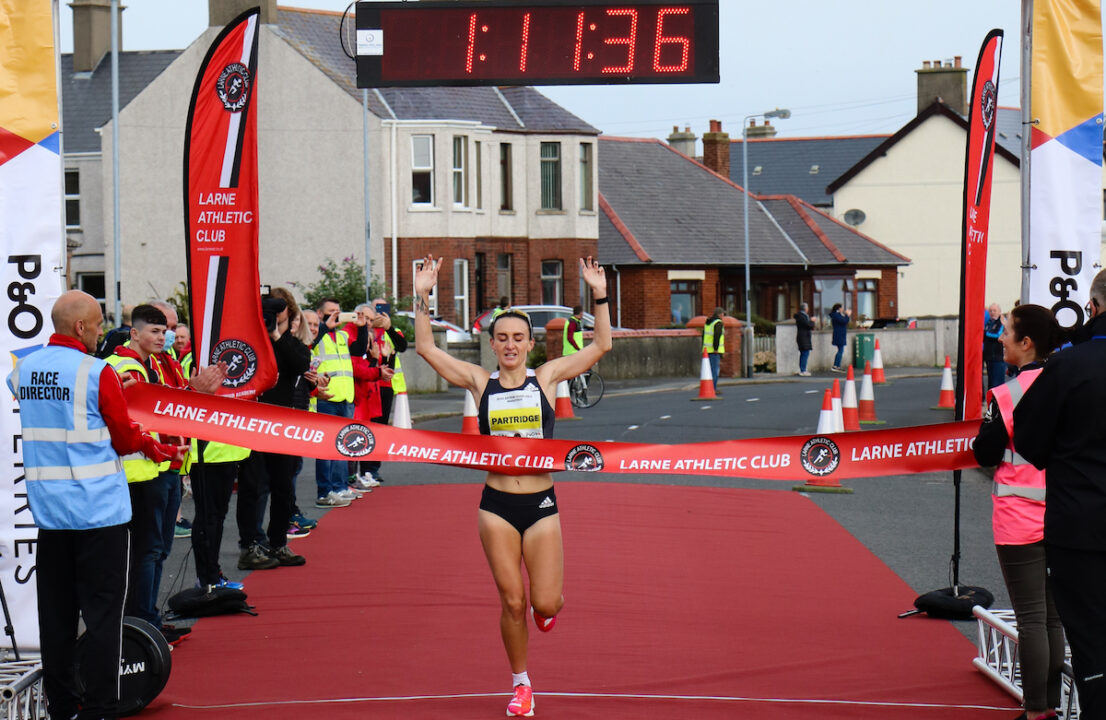 GB athletes show great form in Ostrava and Poznan. Farah and Partridge take all-comer’s records in Antrim. The SOAR Running weekend roundup is brought to you by Gill Bland

Scott shines as Farah and Partridge win in Antrim

The Antrim Coast Half Marathon was perhaps the most talked about event of the week not only thanks to one Sir Mo Farah making an appearance, but also due to the fantastic home grown field on the start list.

It had the added spice of giving us a glimpse of what shape those due to run London Marathon were in.

Farah predictably took the win in 60:27 – not the British record that had been touted, but a very decent time given the stresses that a 1hr track race (and world record) would have put on his legs last week.

Perhaps the real story of the day though was an impressive Half Marathon debut by another Nike athlete – Bowerman Track Club / Cambridge & Coleridge’s Marc Scott. Scott was right up with Farah until the last mile, when his trademark killer-kick proved too much to handle, but 60:39 and third on the British all-time list is a pretty tasty debut. Third place went to Ben Connor who ran a fantastic PB of 60:55 to earn his spot just behind Scott on the all-time list and Stephen Scullion was fourth in 61:08, taking the Northern Irish record in the process.

V60 runner Tommy Hughes was another impressive tale from the race, breaking the over 60 world record to finish in 71:09. Lily Partridge showed good form ahead of London Marathon, running a convincing win in 71:36 (a NI all-comer’s record). Samantha Harrison came back fighting after her disappointment with her 5000m at the British Championship, to race hard and strong and take second place in 71:58.

Wales’s Clara Evans had a great day, taking third in a PB of 71:21. Becky Briggs (City of Hull) also PB’d for fourth place in 72:54 as did  44 year old Kirsty Longley in 75:27 (Liverpool Pembroke Sefton) who pulled away from a strong group of athletws including Jessica Craig. Sadly a few of the women’s field had to drop out before or during the race including Steph Davis who had been a part of a strong early group with Harrison, Partridge, Briggs and pacemaker Holly Archer. Aly Dixon was disappointed but characteristically balanced in her-post race analysis as she pulled out with glute and nerve related pain around five miles.

A full Vlog will be available from the race organisers over coming days.

At the 59th Ostrava Golden Spike, GB athletes had a great evening’s work. Over 1500m Faith Kipyegon (KEN) set a new meeting record, winning in 3:59.05 but Britain’s Laura Weightman ran another brilliant race to place second in 4:01.96 with Gemma Reekie right behind her in 4:03.25.

Eilish McColgan had a tough one, which looks like it may have been thanks to time of the month, finishing 7s slower than she ran the previous week to place 11th in 4:12.07. Eilish – we feel your pain but please don’t “rip out [your] own ovaries”!!

Eurgh.. Me and running aren’t friends right now. In fact, it’s not so much running but more my own body that I’m in a huff with 😂 Of course I’m disappointed with my race in Ostrava – it was 7s slower than I ran just the previous week but the way I was feeling just reinforced that something isn’t right. It also coincided with my time of the month… which meant that after the race I was ready to rip my own ovaries out 🤣 It’s crazy to think that even in 2020, there’s really no clear cut advice as to how to manage your hormones and performance. 🤷🏼‍♀️ And there is certainly no, one-fits-all solution either! I’ve had some stinking runs over the years and my only ever DNFs were caused by feeling like a wee baluga whale! 🐳 The only positive I can take out of last night, is that it’s really given me a kick up the arse to start researching more about what options are available to control my symptoms – rather than just battering through ibuprofen, saying a wee prayer and hoping for the best! 🙏 It’s been SO interesting chatting to other elite athletes and hearing their own experiences over the past few weeks. Thanks @adelletracey @shelayna @lauraweightman1 @gabrielastafford @em_sisson_ and @runkerryrun shared a great post last week too. 💛 It’s so important we broach topics like this, share advice and discuss the good, the bad, the ugly! How do others manage their periods and training!? What works best for you⁉️ I’m all ears. 👂#realtalk . . . #girlproblems #runnerproblems #ukrunchat #runninggirls #ostrava #runners #athlete

Joking aside, that’s a difficult issue to manage and we hope she gets the best science and support behind her so she can keep on fulfilling her huge talent. Over 5000m Melissa Courtney-Bryant was in action and with Sifa Hassan taking it out hard, she fought well amidst a strong field to run 15:16.50 for 6th place.

Elsewhere on the european track circuit, Piers Copeland ran a quality race to take the win over 1500m at the Poznań Athletics Grand Prix in 3:37.51. Newly crowned British Champion George Mills was 5th in 3:38.06 in a field which included the likes of Lewandowski & Kzscot.

Closer to home, clubs continued to host their own track meets, pitting athletes against each other over 1500 and 3000m. Highgate Harriers track at Parliament Hill got a hammering on Wednesday evening.

The competition at the top end of the 3000m men’s field was fierce but it was Highgate’s own Roger Pooleman who ran a convincing victory, charging home in 8:18.9. Brighton Phoenix’s Leo Brewer grabbed a new PB and second place thanks to his 8:22.1. Only three tenths of a second separated the battle of the Alex’s for third and fourth but it was Crossland who won out taking the bronze spot in 8:24.6 (with an honourable mention for Alexandre Lepetre with 8:24.9).

The women’s field was less well represented but Basildon’s Gemma Kersey made sure there was some class at the top, running 9:12.4. Next in line was Gill Bland (Harrow AC) squeaking in under 11 mins with a 10:59.2 (though wearing what I later realised were not track-legal shoes – so I’ll be getting the result removed) . Third place went to Jemima Bowen of Guildford and Godalming with a gutsy run of 11:00.1 in a tough field for her section of the race.

The Roger Bannister Track was host for Harrow AC’s 3000m meet which saw Alex Eykeibosch (Dacorum & Tring) smash out a new PB of 9:27.28 in an otherwise all-male field for her starting group. Another PB was logged by Brighton Phoenix’s Tara Bage who clocked 9:38.88 in the same race that Herne Hill’s Phoebe Anderson (U20) ran 9:57.18.

10km on the roads sees win for GB’s Barlow

At the Spring Handicap 10k in Douglas, Isle of Man, dave Bignell (western) took the win in 35:16 keeping a good distance between him and clubmate Richard Shipway (v50) who finished in 37:16 – a dead heat with Manx’s Jahn Quaye. It was Manx Harriers who topped the women’s results thanks to Ciara Hardisty who finished in 40:30. Dawn Atherton was second in 41:25 and Joanne Schade third in 43:40.

The Kew Gardens 10k took place over two days, giving runners the chance to do a real race and have a whistle-stop botanical tour! Whilst the course wasn’t suited to fast times with the many twists and turns it certaintly provided some strong racing in beautiful condtions.

On the Saturday it was Daniel Mulryan who left the trees trembling as he blasted home in 30:51 followed by Callum Rowlinson in 31:12 and Ronny Wilson in 31:36.

The women’s field was a quality one, with GB marathoner Tracy Barlow home first in 34:54 and Ali Lavender comfortably behind in 35:15. Third place went to Jessica Welborn in 37:11.

Thanks @RichmondRunFest for such a well organised event. I know how hard you have all worked. A race with a difference but possibly an expert at running corners now. Thanks to all the event staff for your cheering & support along the way. A lovely atmosphere 🙌🏼

On the trails, the Centurion CW50 got some good weather and some solid results. Jon Ellis was the proud recipient of a chunky winners trophy after covering the 50 mile course through the Chilterns in 6:22:25. Ed Knudsen was runner up in 6:42:43 and Matthew Brown in third with 7:21:50. The Pilgrims Marathon near Farnham is known for its picturesque course and today was a lovely day for runners to tackle the full or half distance. Results are still tbc at time of writing.