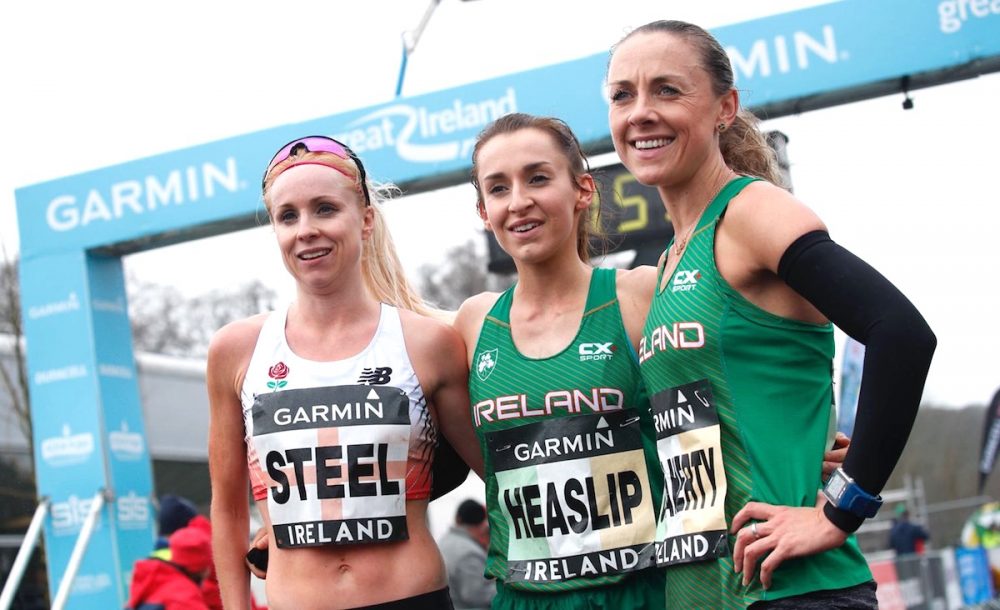 An Riocht’s Heaslip was the winner of the women’s race in the annual showdown between the Irish and English in Dublin’s Phoneix Park on Sunday (April 15).

The event also incorporated the Irish 10k championships, with Heaslip claiming a first Irish road title, ahead of 2017 champion O’Flaherty, with DSD’s Laura Shaughnessy in fourth to complete the national podium in 35:15.

“Today was a brilliant experience, crossing the finish line to the cheers and support of a home crowd was electric,” said former Irish dancer Heaslip. “I’m delighted that the Irish team represented our country and Irish running in the best way possible and I’m really pleased with my finish time, the icing on the cake.”

Also competing for England were Shaftesbury Barnet’s Naomi Taschimowitz and Sale Harriers’ Jenna Hill who finished fifth and sixth in 35:20 and 35:43 respectively.

Steel, who won the women’s race in 2017, commented on Instagram: “Tough day today! 3rd place in a very wet and windy Great Ireland 10k! That course doesn’t get any easier.

“Slow first two miles turned it into a tactical race with a quick last 5k. Didn’t quite have the legs in the last 2k but great performance from the Irish girls who I joined on the podium in good company! Close team race too, but hats off to the Irish.” Lockley clocked a personal best 30:18 ahead of Kilkenny City Harriers’ V40 Maher in 30:20, with Irish Olympian marathoner Mick Clohisey of Raheny Shamrock in third in a time of 30:22.

The overall spoils went to Ireland as they retained the Sean Kyle Cup.

There was also a 5k race, with Killian McNamee representing the USA taking the win in 17:03, with St. Abban’s Maisy O’Sullivan the first woman in 17:26.

Meanwhile, Phil Healy (Bandon/WIT) was in flying form at the University Track and Field Championships at the Mary Peters Track in Belfast.