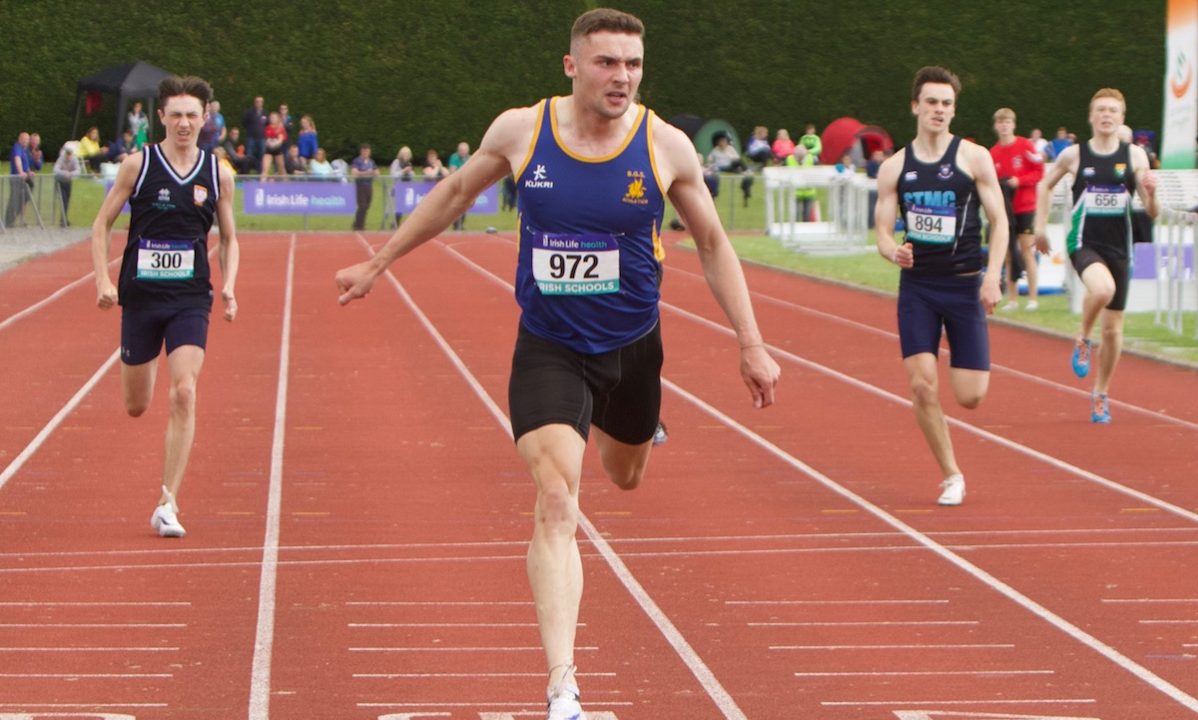 Sexton, Healy, Adeleke and McElhinney all shine on the All Ireland Schools track, whilst elsewhere there was plenty of action on the roads and in the hills.

First up was the 100m, where Bangor Grammar’s Sexton powered his way to victory in a time of 10.46 secs. A fighting second was Conor Morey of PBC Cork who equalled Marcus Lawler’s 2013 record when finishing in 10.59.

Just over an hour later, Sexton settled into his blocks for the 200m and completely dominated the race, with his time of 20.69 secs breaking Lawler’s 20.87 record, also from 2013 and putting him top of the current European U20 listings. If he can hold that form, he may well pick up a medal at the European U20 Championships taking place in Boras, Sweden next month where he will end his athletics career. Rhasidat Adeleke (Presentation Terenure) was another double winner in the sprints, taking the inter girls 100m in 11.69 secs and the 200m in 24.29. Her Irish teammate Patience Jumbo Gula (St Vincent’s Dundalk) won the senior girls’ 100m in 11.81.

In the senior girls 400m, Davicia Patterson (Hunterhouse) improved her 2018 record with a time of 53.23. Dominating the girls’ 4x100m relays was Dublin school Mount Anville with victories at minor, inter and senior level.

Early in the day, European U18 champion Sarah Healy was a class apart in the senior girls 3000m, which she won in 9:24.5, knocking over eight seconds off the previous record. Equally dominant in the senior boys’ 5000m later on was defending champion Efrem Gidey (Le Cheile, Tyrrellstown) who, despite increasingly blustery conditions, managed a time of 14:45.25.

In winning the senior 1500m, Darragh McElhinney (CP Bantrai) made it a clean sweep of schools titles at all levels from minor to senior just a week after becoming the first under 18 athlete to go under 14 minutes for 5000m. McElhinney ran a smart race, pulling away from Shay McEvoy (St Kieran’s Kilkenny) at the bell and crossing the line in 3:52.40.

Race of the day was a dramatic senior boys 800m, where Leinster champion Louis O’Loughlin (Moyle Park) after finding himself boxed in on the back straight chased down Cian McPhillips (Moyne CS). The two were elbow to elbow in the chase for the line, when McPhillips’ legs buckled allowing O’Loughlin to take a fighting victory in 1:52.47

Irish heptathlon record holder Kate O’Connor (St Vincent’s Dundalk) started her day early by finishing joint winner of the senior high jump with a modest 1.65 effort. She later added over two metres to the senior javelin record with a throw of 48.17m.

In the senior high jump, Nelvin Appiah (Moyne CS Longford) went soaring over 2.10 to put him top of the current Irish rankings. At junior level, Geoffrey Joy O’Regan (John the Baptist) recorded a personal best of 1.96 to break a record going back to 1976.

Internationally, Thomas Barr (Ferrybank AC) finished third in the 400m hurdles on a windy and cold night at the Stockholm Diamond League on Thursday evening (May 30).

Norway’s world champion Karsten Warholm ran away with the race in 47.85 secs; the American TJ Holmes was second in 49.25 and Barr third in 50.28.

Barr had recorded a time of 49.41 when opening his season at the Shanghai Diamond League on May 18. His next outing is at Thursday’s Rome Diamond League.

Sean Hehir of Rathfarnham WSAF returned to the track last Wednesday (May 29) where he won the 10,000m at the third Dublin Graded Track and Field meet held at Irishtown Stadium– the race gave athletes a rare opportunity to race over the distance. Hehir finished in 31:40.43 with Lee van Haeften of Donore Harriers second in 31:42.60 and Barry Shiel from Longford AC third in 32:44.71.

In the field, Claire Fitzgerald of Tralee Harriers continued her return to competition in the women’s discus with a best throw of 47.92. Gary O’Hanlon from Clonliffe Harriers was king of Cork again when winning the Cork Marathon on Sunday (June 2) for a second year in 2:21.43.

O’Hanlon broker away early with Tim O’Donoghue (East Cork AC) and former winner Sergiu Ciobanu (Clonliffe Harriers), but broke away coming up to the ten mile mark. O’Donoghue then left Ciobanu behind to come home second in 2:25.53, with Ciobanu third in 2:28.26. Aoibhe Richardson of Kilkenny City Harriers, who is currently based in the USA where she runs with Portland AC, was the winner of the VHI Women’s Mini Marathon 10km in Dublin on Sunday (June 2).

Richardson passed early leader Catherina Mullen (MSB AC) about halfway through the race and went on to win in 34 mins 35 secs. Mullen was second in 35:01 and Olympic marathon runner Breege Connolly (City of Derry) third and first W40 in 35:13.

Leading home the 28,000 or so finishers for a second year was 15-year-old Shauna Bouquet from Craughwell AC who was first wheelchair athletes. Sinead Kane, better known as an ultra runner, was first visually impaired athlete to finish.

Eric Koech (Project Africa) was put under no pressure at the Derry Walled City Marathon on Sunday (June 2) which he won in 2 hrs 34 mins 19 secs. A distant second in 2:40.20 was Chris McGuinness (Foyle Valley AC), with Shane O’Donnell (Rosses AC) third in 2:42.54.

Peter Somba of Dunboyne AC was the winner of the Michelle McKiernan Star of the Sea 5km held in Stamullan, Co Meath on Tuesday (May 28) evening.

Somba finished fives seconds clear of second place Aaron Hanlon of Clonliffe Harriers in 15 mins 15 secs. Third was Eoin Callaghan of the host club in 15:54. First woman was Niamh Devlin of Dundrum South Dublin in 18:12. Mary Leech of Drogheda and District was second woman and first W40 in 18.27 and Laura Mathews of North East Runners third in 18.37. Full result

Mick Clohisey made a welcome return to BHAA running last week winning the Government Services BHAA 5-Mile, in Dunboyneon Tuesday (May 28) in 23 mins 35 secs. Second was Sean Doran in 25.40, with Brian Conroy a close third in 25:46.

In fifth place, Ian McGarth was not only first master home, but was also leading Bank of Ireland to team victory in the A grade, with Cathal McHale and Joe Walsh making up the team. The bank’s B team was second ahead of ESB. Winning grade B was Eir , with Ervia second. Dublin Bus was first in grade C and Gardai in D, with the Garda team led by current Dublin Marathon committee chairman Paul Moran.

First woman in 31:16 was Jill Horan, followed by Alma Hanevy, who was also first master, and local athlete Claire Ni Fhaircheallaigh. Best of the women’s teams was Revenue. Over 400 completed the race. www.bhaa.ie

Winners of the Balbriggan Summerfest 5km on Thursday (May 30) were Stephen Kelly 9Drogheda and District AC) in 16 mins 17 secs and Aoife Parrella (Star of the Sea AC) in 19:11.

Up and down the hills

Coming up this week is an interview with new Wicklow Round record holder Gavin Bryne so keep your eyes peeled for that one.

Daire Bermingham and Catherina McKiernan are your quickest parkrunners in Ireland this weekend (June 1). For full top tens check them out here.

Lindie Naughton is a journalist and writer based in Dublin who joined the athletics club at her college many many years ago and has never quite escaped.

You’ll normally find her jogging around some orienteering course somewhere – or down at the Irishtown track coaching kiddies!