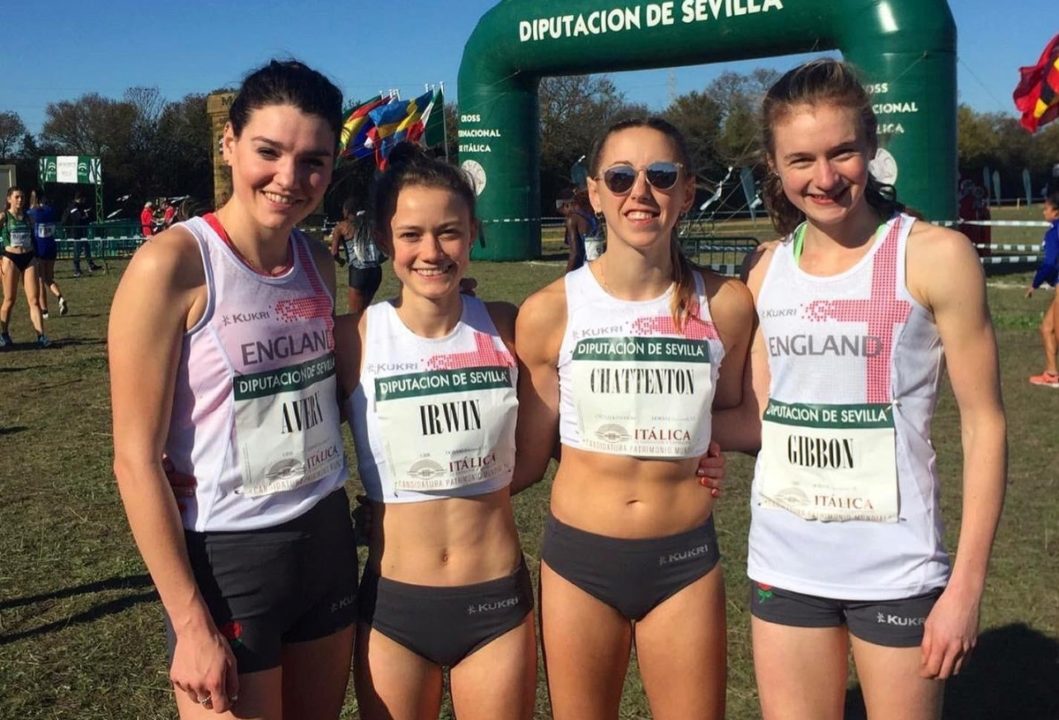 Houston Marathon and Half serves up a host of storming results as Steve Scullion bags himself a spot on the Olympic squad and Steph Twell runs a solid PB. Eilish McColgan bagged another two wins on her tour of the US and the GB ladies are in action for World Athletics XC.

Kicking things off this week, the Houston Marathon was a last-chance for American hopefuls to grab a qualifying time for their Olympic trials, but for one Northern Irish gent it may well have been enough to get him a fast-track ticket to the Irish team.

Stephen Scullion ran the race of his life to take 5th in a PB of 2:11:52 despite windy conditions. Top 5 place at a gold label race means he’s automatically got a spot on the squad unless three others meet that criteria in a faster time. Job done Steve, for now. Next stop Tokyo.

Steph Twell was in action over the Houston Half Marathon in Texas, rubbing shoulders with the likes of Hitomi Niiya (just out of retirement Japanese runner – check her out), Ruti Aga and Caroline Rotich. Twell went out with strong intent finished with 8th place, a chunky PB, a time of 1:08:54 and a huge shout out to all the other UK women marathoners that she’s in fine form to fight for her place on the Olympic team. Twell’s time sees her move to 5th on the UK all time list.

Lothian’s Sarah Inglis was also testing herself out over 13.1 and took exactly 2 minutes off her own PB to run 1:10:22. It wasn’t just the women chewing up the road either, Bedford & County’s Matt Leach also nudged his best down considerably, running an eyewatering 1:02:55. He also set a father/son world half marathon record with his father Andrew (M55) running 71:10.

Back to back wins for McColgan

Eilish McColgan appears to be touring America taking down whatever race she can find. This week she turned her attention to the Butterfield Front Street Mile, Bermuda. She won the race in 4:45.70 despite 67km/h gusts of wind and then went on to win the Bermuda 10k the next day in 33:38 and dominate the Bermuda Triangle Challenge.

In Seville, Kate Avery ran a strong race to place 10th in the Cross Internacional de Itálica as a member of the England team. Dani Chattenton was 14th, Jessica Gibbon was next in 19th place and Fast Running’s Hannah Irwin running her first Senior XC race for England to take 25th place. There were no Brits in the men’s race but there were several fine performances from Irish athletes which we will have covered tomorrow!

Gloucester sees fine performances over half, full marathon and 50k

Back in the UK Gloucester Marathon organisers offered the chance to race over 50k, 26.2 and 13.1 this weekend. In The 50k edition the men smashed the ultra distance as Ollie Garrod of South London Harriers stormed home in only 3:05:47, with Andrew Siggers (Kenilworth Runners) behind him in 3:09:19 and Mark Innocenti (Highgate Harriers) third in 3:10:32. Top in the women’s race was Chelsea Baker from the Royal Navy AC with a time of 4:09:50.

In the standard marathon distance Damian Holmwood of Finch Coaster scored a early-year win in 2:44:06. Second place went to Shyam Lama in 2:45:53 and Peter Stockdale of UKNetRunner 2:46:06 came third. 3:08:27 was tantalisingly close to Gemma Mallet’s PB and enough to secure her the win and plenty of time to get her cool down done before Emma Horner came home in 3:15:06. Cathrin Nather took third in 3:19:42.

In the Half Marathon Anita Seaford brought it home for the ladies in 1:20:13 and while her lead wasn’t wasn’t quite as large as Gemma’s, she was certainly comfortable with a three minute breather before Weston Athletic Club’s Susan Duncan finished in 1:23:36 and Elizabeth Dimmond (Lliswerry Runners) in 1:23:47. Will Munday (Swansea Harriers) ran a speedy PB to run 1:09:57 and take the win in what was only his second attempt at the distance. One to look out for in the future. Pravash Patel of Wolverhampton & Bilston was second in 1:11:48 and Oxford Uni took the third place in 1:12:23 thanks to Alexander Betts.

In it’s 4th year, the Chepstow Harriers Speedway 10k is fast becoming known as a place to run, well, speedy! Although some of the Welsh talent were away in Spain and there were a few apparent non-starters from the published list, the field was still stacked going into the race.

Once again it was course record holder Ohmar Ahmed (Birchfield Harriers) who won out in 28:58. Jonathan Cornish of Hercules Wimbledon ran is first sub-30 to take second place in 29:38 and ‘fat – now fast’ (their words, not ours) Paul Graham also grabbed his sub-30 and third place with a 29:42. Fourth was Ben Cole in 29:43 with Kadar Omar Abdullami fifth with 29:44 as eight men ran sub 30.

A last minute entry from Verity Ockenden paid off and secured the Swansea Harrier a top spot and a course record thanks to her 33:08. Oswestry’s Ali Lavender is an up and coming marathon runner but her 10k PB (34:11) was also ripe for a re-write and re-write it she did, running 34:03 for 2nd place. Third went to home-club runner, Katherine Matthews (V40) in 36:39. Natasha Lewis of Team Bath AC took over a minute off her PB to finish 4th in 36:44.

Some fast runners at today’s Speedway 10k in the shadows of the Severn Bridge. @Birchfield1877‘s Omar Ahmed took the win with a new course record and @SwanHarrierDev‘s @youngverit21 was first female home. pic.twitter.com/37ns5Vjo6G

At the Helsby Half (aka Essar Four Villages Half Marathon) another of the current slew in up-and-coming women marathoners was in action. Elsey Whyman-Davis took her first win of the year with a 1:14:31. Kirsty Longley of Liverpool Pembroke & Sefton H AC was a little after her in 1:16:34 and Sophie Wood of Sale Harriers Manchester ran 1:18:16 for third. For the gents, Mohammad Abu-Rezeq ran a swift, but comfortable (for him) win of 1:06:14. Cardiff Athletics’ Michael Kallenberg was second in 1:07:03 and Matthew Shaw of Chorlton Runners took third in 1:10:19.

The Benfleet 15 provided no returning podium placers from last year, leaving the medals open for a new set of winners. The crisp, sunny Sunday was a fine day to be running and one that suited clearly suited winner Ram Osman of Colchester Harriers who completed the course in 1:32:56. Second place went to Aaron Graves Tiptree Roadrunners 1:34:33 and third place to Kurtis Swan of Braintree and District AC in 1:35:08.

In the women’s race Vegan Runners’ Lindsey Colman finished first in 1:49:13 with V40 Nikki Woodyard (Springfield Striders AC) next in 1:50:28 and Jennifer Ansell of East London Runners rounding out the podium spots in 1:49:34.

Aaron Scott took 20 second off the course record at the Folksworth 15, which will be a nice confidence boost to his London Marathon training full results are yet to be released.

The Stormforce 10 always attracts some of the best athletes across the South West and this year was no different. Tony Brewer came away with the win in 55:03 followed by Matt Yates in 55:36 and Paul Smith in 55:53. South West Intercounties XC Champion Heidi Tregenza was the winning woman in 60:03 ahead of CAC legend Emma Stepto (60:44) and Tamara Beach (60:58). The Race Organiser Victoria Park 10k was won by Charlie Stoneham in 34:59 with Sophie Cowper of Rotherham Harriers second in 36:25 and Natalie Ruffell of Clapham Chasers third in 38:29. In the men’s race Ralph Collett of Worthing and District Harriers grabbed top spot in 33:50. Chris Norris and Rick Weston (Serpentine RC) were his podium buddies in 34:25 and 34:42 respectively.

And if that’s not enough for you, how about a 268 mile race up the Penine way? That was what US runner John Kelly did for 87 hours 53 minutes and 57 seconds to win the Montane Spine race. It looked for a while like the Barkley Marathons finisher might beat Jasmin Paris’s course record set last year but brutal weather conditions put paid to that in the end leaving her 83 hour record intact. Sabrina Verjee was the first lady to reach the finish at Kirk Yetholm in a total time of 108hrs 7mins 17 seconds.