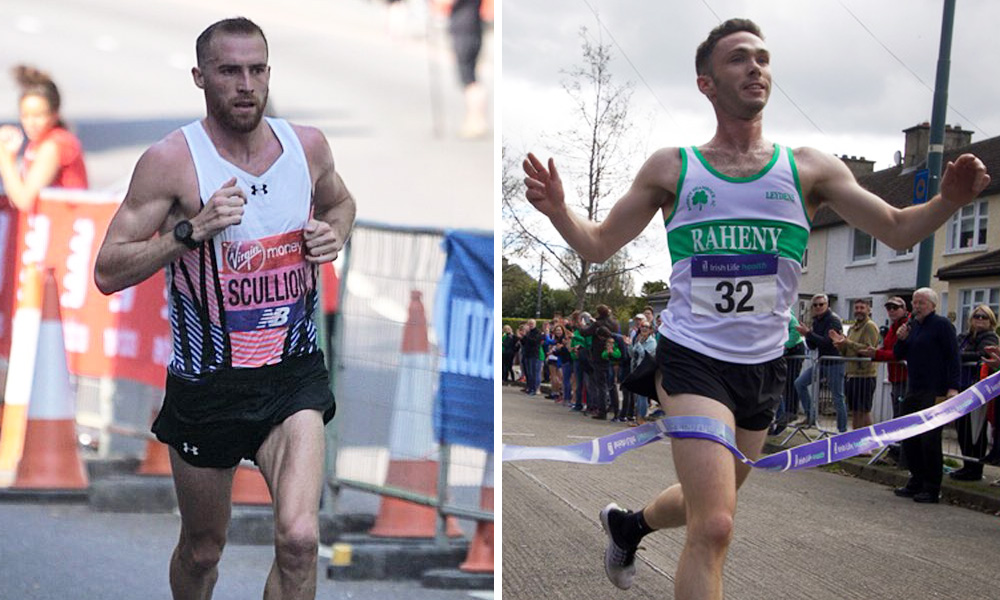 A big PB for the Belfast man in the marathon major, while Raheny wins a third straight Irish road relay title.

Northern Irish runner Stephen Scullion finished 12th at the London Marathon on Sunday (April 22) in a personal best time of 2:15:55.

Despite the hot temperatures the 29-year-old held his pace as others faded and crossed the finish line ahead of all the British marathon runners bar Mo Farah.

Scullion’s time is comfortably inside the qualifying mark of 2:17 for the European Championships next August. “That was hard work today and I doubted myself a few times out there, “too heavy for this heat” “drop out and run Belfast hard” but that’s running and it’s a battle,” said Scullion on Twitter afterwards. “That was real racing, bit hotter than optimum. But I’m proud of myself, always learning and adjusting from mistakes.”

First M40 in the race was Irish marathon champion Gary O’Hanlon of Clonliffe Harriers who ran a time of 2:21:15.

Although O’Hanlon would have liked the have clocked a time closer to his 2:17:59 PB set in Dublin last year, walking away with the V40 title at a marathon major is a good achievement.

Finishing in 2:26.32 on his marathon debut was Eoghan Totten of Newcastle AC, while Patrick Monahan of Le Cheile AC was 19th (1:36.11) in the wheelchair race.

For a third year, host club Raheny Shamrock won the men’s senior title at the National Road Relays, held in blustery conditions on a one-mile circuit in Raheny, Dublin on Sunday (April 22). The boys in green led from the opening two-mile lap, with Kieran Kelly building up a small lead on the chasers, led by Kilkenny City Harriers, and Eoin Strutt maintaining that lead on the one-mile leg that followed.

Next was the three-mile leg, where marathon man Mick Clohisey for Raheny was gradually reeled in by Hiko Tonusa of Dundrum South Dublin.

That gave John Eves for DSD a small lead going into the final two-mile leg, which as it happened, wasn’t enough to hold off the in-form Conor Dooney for Raheny.

Halfway through the leg, he was comfortably in front and brought his team home as worthy winners in 37:47 for the 8-mile total distance. DSD finished second in 38:10 and KCH third in 38:14

Rachel Gibson forged a lead for North Down at the end of the opening mile leg and had a narrow lead on DSD with defending champions UCD third and Dublin City Harriers fourth. For DSD, marathon Olympian Linda Byrne handed over to Fiona Clinton who managed to keep closely in touch with North Down after Jessica Craig putting kept them ahead on the second leg.

Only on the final mile leg did DSD’s anchor woman Meghan Ryan take over in front relegating North Down to second place and bringing the team home in 21:34.

The closest race of the competition was the master men’s 4 mile with Tristan Druet winning the sprint for the line. for Donore Harriers. Best of the M50 teams was St Finbarr’s.

Finn Valley were clear winners of the master women’s race, while Raheny took the W50 title. For team stalwart Annette Kealy it was a record 14th road relay victory.

On Saturday (April 21), Ben Branagh of St Malachy’s AC and Jessica Craig of North Down AC were the winners of the Ballynahinch Lions 10km in Co Down. Branagh finished in 32:26 and Craig in 37:39.

The first woman was Fiona Santry of East Cork AC in 23:42. Full results can be found here.

On Friday (April 20), Neill Sheil St Killian’s AC was the winner of the Faugheen 5km, which was the opening round of the Outfield Sports Carrick AC race series.