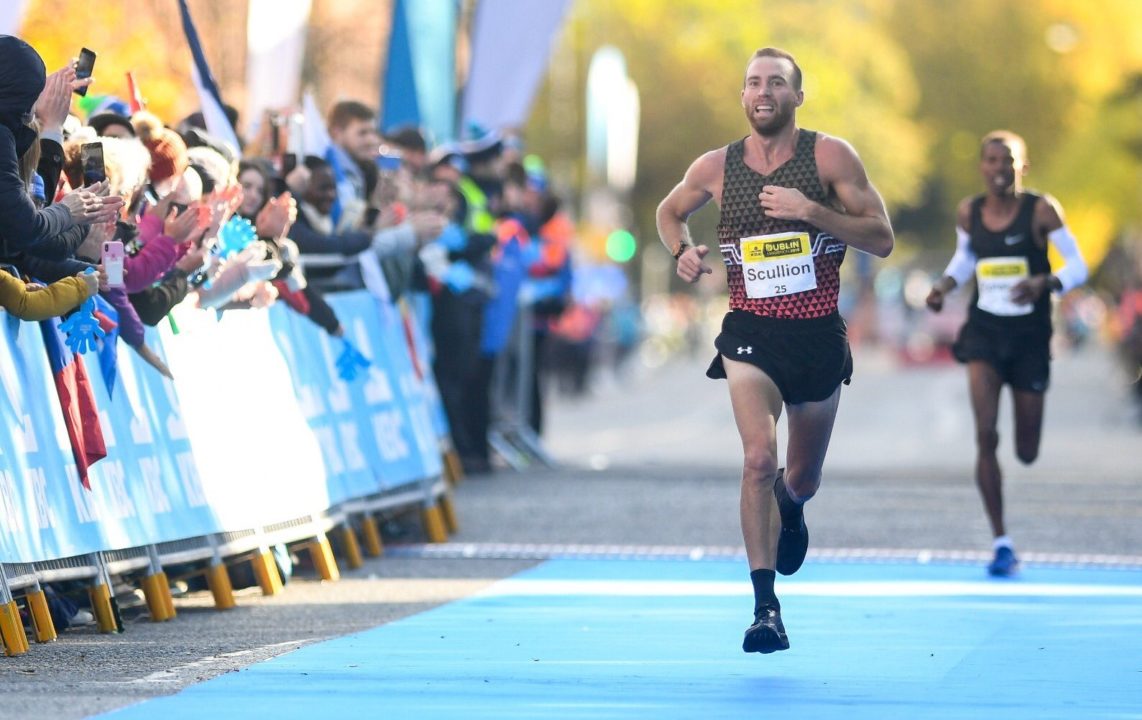 Another Irish athlete books a spot in the marathon team for the Tokyo Olympics with a fine racing performance in the US, whilst there plenty action in the cross country too. Lindie Naughton reports.

Although just shy of the qualifying time of 2:11.30, his fifth-place finish in a gold label race should see him join Paul Pollock and Fionnuala McCormack in the Irish marathon at the Tokyo Olympics.

“This hurt me a lot – 18mphwinds. It made me angry that I needed to run fast, but I had to relax and not make excuse,” tweeted Scullion after the race.

It was his third marathon in 15 weeks. His previous best time was the 2:12.01 he ran for second place at the Dublin Marathon last October. In Houston last year, Scullion ran 2:14.34 despite taking a wrong turn.

At the third round of the Meet and Train Women’s Winter League over two miles at Cherryfield Park, Firhouse. Niamh Fitzgerald of Lucan Harriers took her second win of the series. Winning the battle for second place was Sinead Tighe of host club Brother Pearse while third was Eimear English of Dunboyne AC.

A day earlier, Tighe had finished second in the women’s race at the Eir BHAA Cross-Country at the same venue. Final league round takes place on Sunday February 16 in Abbotstown.

Winner of the Newcastle NS 5km in Co Tipperary on Sunday (January 19) was Pat Hennessy of West Waterford AC in 15 mins 21 secs. His clubmate Raivis Zakis was second in 16:01 and Tom Bennet third in 17.24. First woman was Angela McCann in 18:42 followed by Elaine Horgan 20.57 and Aisling English in 21:20 with all three women from Clonmel AC.

A festival of cross country running

Karen Wilton of Jog Lisburn was a clear winner of the open women and men’s race at the North Down Festival of Cross-Country in Castle Park, Bangor on Saturday (January 18) . Denise Logue of Ballydrain Harriers was second and Heather Kelly third.

City of Lisburn won the women’s three-leg relay race from North Down AC’s U20 team with Ballydrain Harriers third and first masters team. Over four legs, Annadale Striders was first of the men’s teams, with half a minute to spare on Lagan Valley AC. North Down AC finished third and slo finishes best of the masters’ teams.

Colm Turner of Gardai made it two wins from two BHAA races in the men’s 5-mile race at the Eir BHAA Cross-Country in Cherryfield Park, Firhouse, Dublin on Saturday (January 18).

Turner finished in 26 mins 10 secs, with Sean Doran of Harrier Products a close second in 26:16. Finishing third in 26. 31 was Kevin Donogher. Gardai won the A grade team category from Bank of Ireland and the Teachers team, with Central Bank winning grade B, Fingal County Council C, and RTE D.

Grainne Butler, Therapist, won the women’s two mile race from Sinead Tighe, with Niamh Corby in third place leading Revenue to team victory ahead of Retail A and Irish Life. Apparently it was better weather for the notorious Montane Spine Race this year.

Back to the Spine

Twice former winner Eoin Keith has finished second in the Spine Race, the winter ultra marathon along the Pennine Way from Edale in England’s Peak District to Kirk Yetholm in Scotland.

Keith also finished second last year in 98:18.23 and has a unique record of two wins and three second places in the race.

Former Irish heptathlon record holder Elizabeth Morland of Cushinstown AC made a useful start to the season with victory at the National Indoor Combined Events Championships held in Athlone on Saturday (January 18).

Morland’s winning score of 3806 for the pentathlon was a championship best performance and not far off her personal best of 4043 recorded in 2016 – an Irish record at the time. That record was improved last winter first by Kate O’Connor and then by Grace McKenzie, who at 23, is the oldest of this trio of talented multi-eventers.

Winning the men’s title with a score of 3584 points was Rolus Olusa of Clonliffe Harriers with defending champion Shane Aston of Trim AC second with 3320 points.