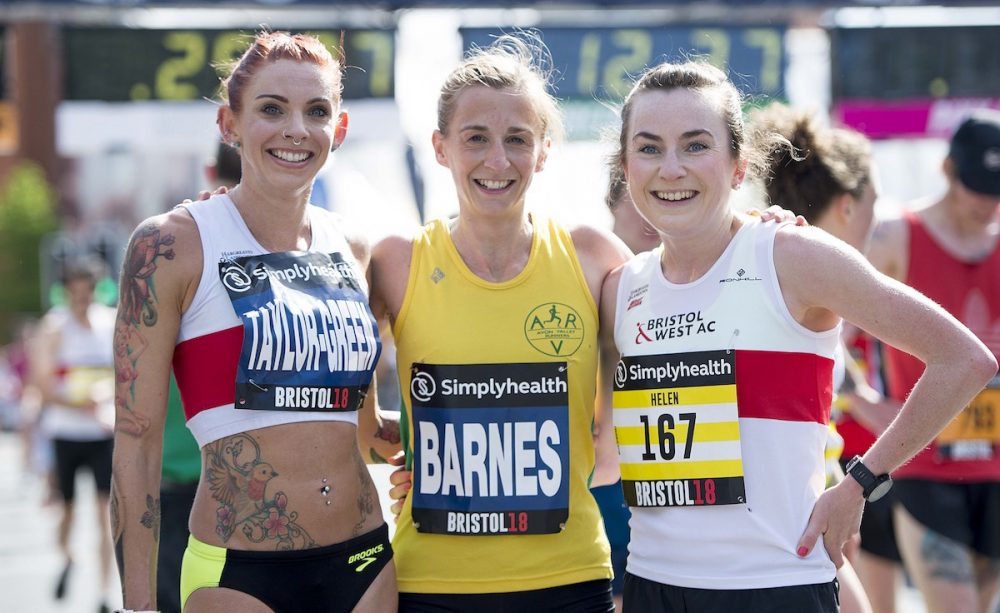 Runners battled high temperatures at Bristol, and 10ks and half marathons in Leeds Sunderland, Oxford and Beverley produced some fine performances in the sunshine.

On Saturday night (May 12), Nick Goolab and Faye Fullerton won the Ipswich Twilight 5k titles with four men going under 14 minutes, a report from Ipswich can be found here.

Despite the elite and good standard club runners setting off at the relatively early time of 9.30am, temperatures were still sweltering for those taking on the Great Bristol 10k.

Exmouth’s Tom Merson and Cheltenham’s Philip Wylie made the conditions look easy though, as they fought it out for victory to the last few metres, with Merson just holding off Wylie to take the win in a season’s best 30:34 while V35 Wylie finished just three seconds behind. Hercules Wimbledon’s Jonathan Cornish may have been some way back in third but he was rewarded with a 31:01 PB, a real achievement in the heat of the South West city.

Avon Valley’s V35 Ruth Barnes was in fine form to take the women’s race in 34:23, just eight seconds shy of her PB. Barnes recently ran a 74:59 PB at the Granollers half marathon in her first outing in an England vest.

Bristol & West’s Charlotte Taylor-Green, a talented steeplechaser and an increasingly impressive endurance runner on the roads, confirmed her near 90 second improvement over the distance at the recent Cardiff 10k was no fluke, running 35 minutes dead to finish second lady. Club mate Helen Newberry also ran well to take third in a PB 36:03.

Leeds half marathon, Sunday May 13

Altrincham & District’s Mohammed Abu-Rezeq took the top honours on the streets of Leeds in 68:06, giving him a very comfortable 90 second margin of victory over Serpentine’s Chris Oddy (69:37), who himself was well clear of his nearest rival in Matt Chipping, who crossed the line third in 72:49.

Sunderland 10k and half marathon, Sunday May 13

The men’s half marathon produced an impressive victory for Saltwell Harriers’ Abraham Tewelde, who ran 70:14 for the win, with Gateshead Harriers’ Conrad Franks more than two minutes adrift in second place in 71:33, and Birtley AC’s Darren Purvis’s 73:42 good enough for third.

Abraham Tewelde takes the win in 1:10:14 in the Half marathon! pic.twitter.com/F2nNME0GfK

Eleanor Hunt just held off stiff competition from Isabel Steele when she took the win in 83:26 to Steele’s 83:48, while home girl Alice Smith from Sunderland Harriers was third in 85:50.

There was more home talent on show in the 10k when Sunderland Harriers Andy Powell won the men’s race in 33:03, while Jarrow & Hebburn’s Alex Sneddon won the women’s race in 36:54 to finish 15th overall.

Liam Taylor and John Clifford finished second and third in 33:28 and 33:31 respectively.

Heaton Harriers’ Danielle Smyth also enjoyed a strong run to finish second woman in 37:56, as did NSP’s Steph Maclean-Dann, who made up the podium positions with a 39:28 clocking.

City of Hull’s Kris Lecher won the men’s race in 31:21, just seconds off his 2014 best. The local athlete finished almost a minute ahead of Harry Powell of Kingston upon Hull AC.

Preston Harriers’ Becky Rigby was the runaway winner in the women’s race clocking 34:52 with City of Hull’s Carla Stansfield second.

Torbay’s Charlie Arnell scored a huge near 90 second PB when she won the classic Oxford event in 36:06, while second and third was a close affair for Woodstock’s Jess Webb and Julie Fricke, with just ten seconds separating their times of 36:53 and 37:03 respectively.

It was a home grown win for the host club’s Lucy Mapp when she scored victory with a small PB of 40:11. Joanne Larwood (42:09) and Katherine Rigby (42:54) were second and third respectively.

The top three men were the only athletes at the sharp end of the race to break 35 minutes in the Essex town, with Wallsend’s Jordan Middlemist coming out on top in a big PB of 34:27. Colchester’s V35 Nate Filer was also in PB form with 34:36 clocking, while club mate and V40 Doug McGillivray made his first outing over the 10k distance count when he finished third in 34:48.