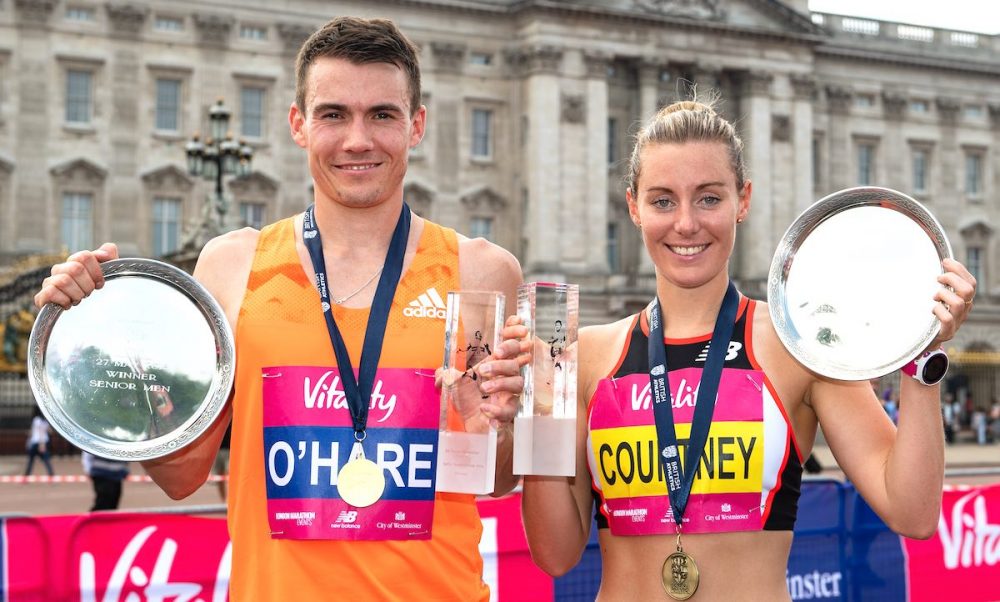 Athletes took on events from the classic mile in London’s Westminster, to distances ranging from 5k, 10k, half marathon and the marathon in Edinburgh, Stornoway, Kirkcudbright and Dorchester.

While the elite mile times were down on previous years’ records, the Westminster Mile broke a global tape when more than 8000 finishers crossed the line throughout the day’s proceedings, making it the biggest ever timed mile event in the world.

8048 finishers completed the Vitality Westminster Mile on the streets of London, meaning it is now officially bigger than the previous world leader, the New York Mile.

Edinburgh’s Chris O’Hare won the British Mile Championships in 4:04 ahead of Brighton Phoenix’s Charlie Da’Vall Grice, who was given exactly the same time, while Birchfield’s Elliott Giles took third just ahead of Bracknell’s Zak Seddon in 4:05, with Edinburgh’s Jake Wightman fifth after making an earlier bid for victory.

Poole’s Melissa Courtney won the senior women’s race in 4:35 from Birchfield’s Sarah McDonald’s 4:36, and Epsom & Ewell’s Rosie Clarke was third in 4:38. The consistently excellent Hannah England of Oxford City was fourth in 4:42. The U20 women’s race was won by West Suffolk’s Emily Moyes in 5:03, while Middlesborough’s Josh Allen took victory in the men’s U20 event in 4:26.

Cambridge & Coleridge’s Thomas Keen was a clear winner in the U17 race, taking a very impressive victory in 4:15 to follow up a top class season on the country and now the track and road. Dorking & Mole Valley’s Elsa Palmer took U17 women’s glory in 5:09.

In the first ever masters races, V35 Joe Ashley was first across the line in 4:33, while Charlene Jacobs-Conradie, also a V35, took the women’s race in 5:19.

Kenya’s Joel Kipkemboi Kiptoo won the Scottish capital’s biggest endurance event in an event record time of 2:13:33, with his winning result breaking the previous record by more than two minutes.

Jeffrey Stein’s 2:21:21 was good enough for second place, some 8 minutes adrift of Kiptoo, while Michael Crawley took third prize with 2:24:43.

WINNER of the 2018 Edinburgh Marathon is Joel Kipkemboi Kiptoo from Kenya with a provisional winning time of 02:13:33! He just smashed the previous record set in 2005 by 2 minutes, incredible!#edinburghmarathon #emf2018 pic.twitter.com/9rYBP33io9

Spain’s Severino Felipe Gomez took the win in 70:37 ahead of Mexico’s Arturo Gonzalez and Gateshead’s Conrad Franks, who posted times of 70:53 and 70:55 respectively.

Bedford’s Will Mackay took the top spoils in 73:23, with Hunters Bog Trotters’ Ewan Crawford and Will Bowers from Ochil Hill Runners taking second and third in 77:24 and 80:11 respectively.

Giffnock North’s Nicole Scott scored a PB when taking the women’s race in 92:12, ahead of Mairi Gougeon’s 93:35 and Stornoway’s Marina Murray’s 96:38.

Dumfries RC’s Lisa Finlay took the women’s race in 86:46, with Hardrock Hoodlums’ Donna Burnett’s 93:49 earning her the second prize ahead of Barnsley’s Beth Massey’s 97:02. The top three women were notably all V40s.

While the full results were unavailable at the time of this report (with the unofficial results currently showing rather incredulously a woman called Hilary Yuille winning overall in 2:20, and another woman (a V50) called Alaine Harman running 2:29 in 4th overall!), the official winner overall was the indomitable Steve Way, who posted a new course record of 2:28:28.

The course record was also broken in the women’s race with Hayley Merifield clocking 3:24:27.