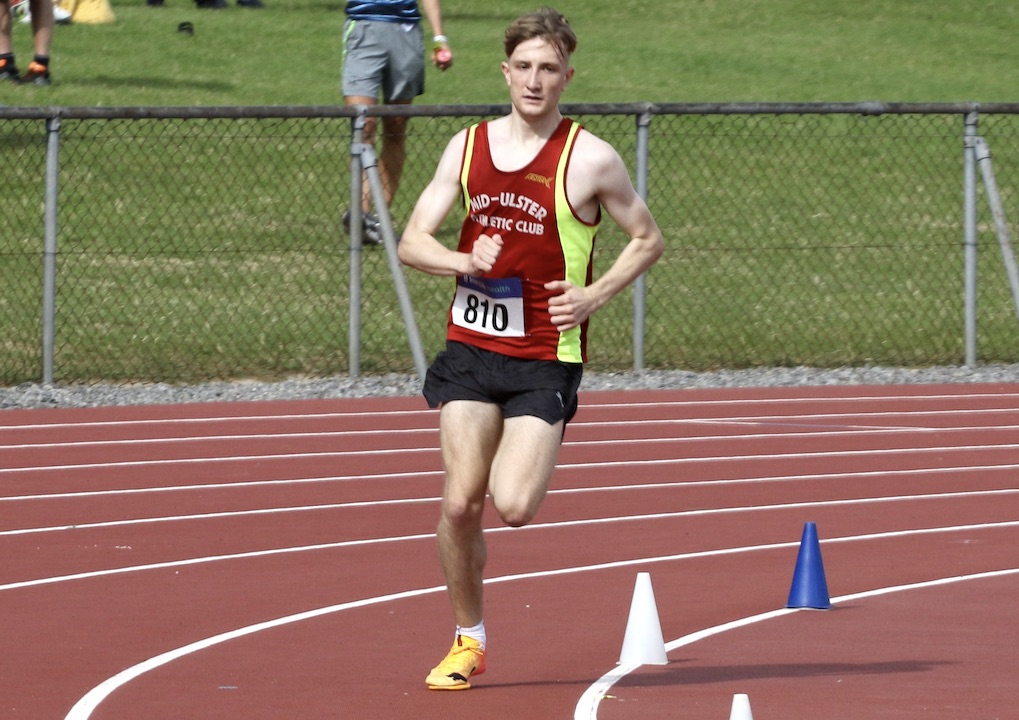 Whilst still waiting for an Irish athlete to reach a final at the World Championships, Lindie Naughton report on all the action at home and abroad.

Peter Somba of Dunboyne AC and Grace Lynch of Iveagh AC were the winners at the Fingal 10km on Sunday morning (July 17) — the second race in this year’s revived Dublin Marathon Race Series.

For Somba, a familiar figure on the Leinster roads for some years, who finished second behind Hugh Armstrong in the opening round of the series at Tallaght, this was a solid victory. His time of 30 mins 46 secs came after he pulled away from Mick Clohisey of Raheny Shamrock AC, who finished second in 31:05. A distant third in 31:54 was John Black of North Belfast Harriers.

First woman home was Grace Lynch of Iveragh AC in a personal best time of 34:01; Lynch works as a regional development officer with Athletics Ireland. In the battle for second place, Mary Mulhare of Portlaoise AC sprinted past Ciara Hickey of Brothers Pearse AC in the later stages of the race to cross the line in 34:44, with Hickey a close third in 34:50.

Finn Valley’s Eugene Merritt was first home at the Brandon Bay Half Marathon in Co Kerry on Saturday (July 16).
Merritt finished in 85 mins 17 secs, comfortably clear of second placed PJ O’Halloran in 86:54 and Rory Prendergast in 88:08. First woman in 1:43.48 was Annalise Hutch of East Cork AC. Angela Charlton was second in 1:47.25 and Mary Doody third in 1:49.23. Building up to the European Champs

Using the race as a hard training session before next month’s marathon at the European Championships, Olympian Aoife Cooke of Eagle AC finished a comfortable seventh overall in the Tracton 4-mile at Minane Bridge near Carrigaline on Friday evening (July 15) writes John Walshe.

Cooke’s time of 22:23 gave her over four minutes to spare over Meadhbh Moynihan of Leevale AC who finished in 26:45 with Siobhan Holland, also Eagle AC, third in 28:33.

Pat Hennessy of West Waterford AC continued his hectic racing schedule — which included a win in his own club’s 10km the previous week — to take overall honours in 20:30.

The hilly course and warm conditions posed no problem for Hennessy as he led all the way to finish over half-a-minute clear of Vivian Foley of Eagle AC who recorded 21:04. Leevale’s Aidan Noone was third in 21:43

With almost 180 finishers, the race was a tremendous first effort for the rejuvenated Tracton AC, a club that has been in existence since 1954.

On the same evening in Clonmel, Co Tipperary, Paddy Cummins of Moycarkey Coolcroo AC and Keith Kelly of Donoghmore AC battled it out at the Clerihen 8km with Cummins the winner in 27 mins 32 secs and Kelly seven seconds behind for second. Third in 28:03 was Shane Scully of Nenagh Olympic AC.

Ross Collins of the Central Bank was the winner of the Dublin City Council BHAA 5km held in and around Irishtown track on Wednesday (July 13).

His time of the 16 mins 34 secs saw him finish comfortably clear of the veteran Paul Fleming of Ornua who finished in 16:52. Third in 17:06 was Michael O’Connor of Bank of Ireland.

A large group from Clonliffe Harriers had signed up for the woman’s race with clubmates Alanna Cooley and Laura Tuite battling it out until the finish line; their times were 18:24 and 18:25. Third in 18:51 was Laura Ryan.

In the masters categories, Joe Walsh was fourth and first M45 in 17:25, Paul Cowhie of CMS, sixth overall and first M55 in 17:27. Supervets Trevor Lloyd and Anne Woodlock were first M75 and W80 respectively. Also in action was a large group from Blackrock AC.

At the ongoing World Athletics Championships, Eugene, Oregon, USA, Andrew Coscoran of Star of the Sea AC made it into the semi-finals of the men’s 1500m finishing third in his heat with a season’s best time of 3:36.30. In the semi-final on Sunday, he finished 12th in 3:44.61 having been as high as eighth midway through the race.

Ireland’s best result (so far) came from the vastly experienced Thomas Barr of Ferrybank AC in the 400m hurdles.
Barr qualified easily for the semi-finals with a time of 49.12 for second place in his heat, but went out in Sunday’s semi-finals, finishing a fighting fifth in 50.08.

Left to come in the middle distances are Mark English of Finn Valley AC and Leevale’s Louise Shanahan, both in the 800m.

Nick Griggs of Mid-Ulster AC comfirmed his status as one of the most promising talents in Irish middle distance running with an assured victory in the junior men’s 3000m at the National Junior and Under 23 Track and Field Championships in Tullamore on Sunday (July 17).

Griggs ran a smart race allowing the Casey twins from Ennis TC to set the pace in early laps. At the bell, he made his move, racing away from the field to win in 8 mins 17.24 secs. Winning the U23 5000m with a front running performanace was Matthew Neill from Strive Racing AC. Neill’s time of 14:14.88 saw him finish comfortably clear of Thomas Devaney of Castlebar AC who had remained on Neill’s shoulder in the early stages of the race and finished in 14:55.28. Third in 15:03.80 was Stephen Fay of Raheny Shamrock AC.

An Irish team of over 70 took part in the annual SIAB Schools U17 International, held at the Mary Peters Track in Belfast on Saturday (July 16), with teams from England, Scotland and Wales, as well as Ireland, taking part. Zak Hanna of Newcastle AC picked up valuable ranking points when finished eleventh at the French round of the World Mountain Running Association’s World Cup on Saturday (July 16).

Matthew McConnell in 14th place proved best of the Irish at the International Snowdon Race held in Llanberis, north Wales, on Saturday (July 16)

McConnell completed the classic up and down 10-mile course in 77 mins 6 mins. Two places behind him in 78:12 was Aaron McGrady. Finishing seventh of the elite women was Roisin Howley in 89:56.

A total of 375 runners of all ages and standards completed the race, with Scotland’s Ross Gallen in 69 :21 and Holly Page in 79:27 the individual winners.

Conall Whelan, better known as an orienteer, was the winner of the Reeks Skyline race in Co Kerry on Saturday (July 16).

Whelan completed the 24km race with 2,400 climb, which consisted of two differing loops around the slopes of Carrauntoohill, Ireland’s highest mountain, in 3 hrs 42 mins 28 secs. Second in 3:49.02 was Simon Duggan, while third in 4:03.12 was Brian Mullins.

Ellen Vitting of Trim AC, winner of the Seven Sisters Skyline in Co Donegal earlier this year, was first woman in 4:53.01. Vitting heads to France for the Mont Blanc Ultra next month.

Junior athlete Ashley Crutchley was the winner of the Sea 2 Sky 10km, from the promenade at Newcastle Co Down into the foothills of the Mourne Mountains, on Friday evening.

Crutchley had almost a minute to spare on the chasers when finishing in 36 mins 7 secs. Second and first M45 in 37:18 was Neill Weir of Willowfield Harriers in 37:18, while third and first M35 in 37:20 was Sean Russell.

Finishing eleventh and first woman was Gladys Ganiel of North Belfast Harriers in 39:51; Ganiel was also first W45. Ciara Coffey of Newry AC in 44:05 and Lucy Scott in 44:08 were second and third.

Winners of the 5km were Lagan Valley’s Stephen Lunn in 17:09 and junior athlete Ciara Savage of Newcastle AC in 21:47. Keith Russell of Navan AC was the winner of the Grey Abbey 12-Hour Endurance Challenge in Newtownards, Co Down, completing 22 laps of the 5.6km loop for a total of 125.4 kilometres (77.9 miles).

Second and first woman with 102.6km was Katherine Harness of Dub Runners of Belfast, while third with 96.9km was Bobbie Irvine of Seapark AC in Carrickfergus, who was also first M55.

Winning the 6-hour challenge was Mark Walker with 68.4km. A lap behind with 62.7km was Neil Mearns of Scrabo Striders while third and first woman with 57km was Jenny Elliott York of Cuilcagh Tri Club.