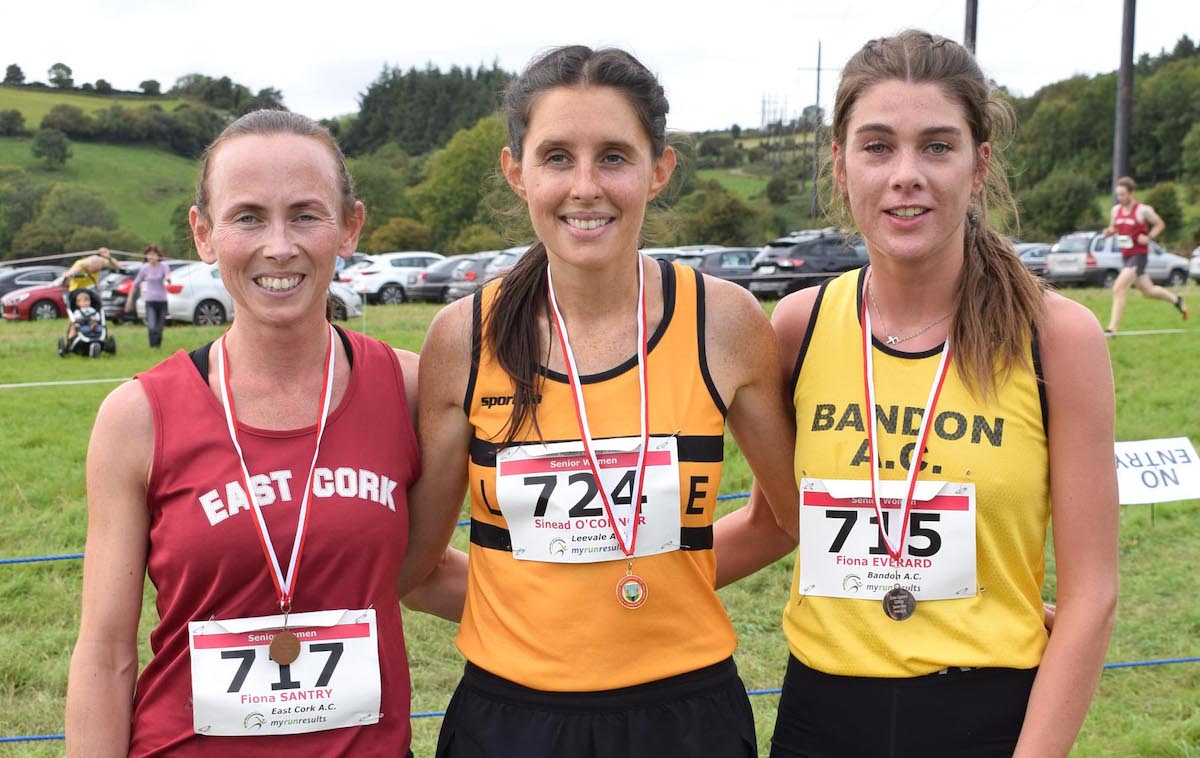 Relays, cross country and the end of the mountain running season approaching means it feels a lot like the autumn now. Lindie Naughton reports.

The trip to Belfast for the Victoria Park Relays on Saturday (October 1) proved worthwhile for Clonliffe Harriers when they finished best in the senior men’s race in 37 mins 48 secs. Second and taking the NI and Ulster title in 38:28 was the St Malachy’s team, while third in 38:37 was Annadale Striders A. A total of 27 teams finished.

Annadale took the women’s title with a clear victory in 45:31. North Down AC was second in 47:13 and Clonliffe Harriers third in 47:20. Annadale also proved best of the master women’s teams winning in 48:15. Beechmount Harriers A were second in 51:41 and Victoria Park and Connswater AC third in 52:05. Nineteen senior and 24 masters teams finished. Sergiu Ciobanu’s winning streak continued at the Run Galway Bay Half Marathon. The Clonliffe Harrier proved the class of the field leading home 857 finishers in an untroubled time of 70 mins 24 secs.

A distant second in 77 mins 38 secs was Brendan Conway. In a closely fought women’s race, the top three finished within fourteen seconds of each other. Eimear O’Leary was first in 9207, followed by Miriam Logan 92:17 and Aisling O’Connor 91:21.

On a good day for female athletes, Lizzie Lee of Leevale AC was the outright winner of the associated 10km in 35mins 25 secs. Second and first man in 35:49 was Alfie Davis. Both runners are over 40.

In Edinburgh, Irish international runner Fionnula Ross was the winner of the Scottish Half Marathon Championships in a time of 73 mins 25 secs.

In Dublin, Darren Keegan in 27 mins 13secs and Kate Purcell of Raheny Shamrock AC in 28:17 were the winners of the Simon Home Run 8km, in the Phoenix Park.

On the streets of London

Best Irish results at the London Marathon (Sunday October 2) came from wheelchair athlete Patrick Monaghan of Le Cheile AC who finished ninth in the wheelchair race in a time of 1 hr 34 mins 16 secs. Mark Miller was 24th in 1:45.38.

In Cork, Darren McCann of Navy won a battle to the line at the Janssen BHAA 6km in Cork. McCann finished in 20 mins 36 secs, followed by Steven Darby ofMTU 2038 and Alfie Davis of UCDD third and first M45in 20.40.

In a women’s race dominated by masters, Carmel Crowley of Stockhealth was the winner and first M50 in 23:08. Linda O’Connor of Musgrave was second in 23:38 and Nollaigh O’Neill of Mercy Hospital a close third in 23:20. Winners in the A grade of teams were the Dell Tech men and the Novartis women.

Killian Mooney of host club Dundrum South Dublin AC made it a home win at the Sandyford 5km in south Dublin on Thursday (September 29). Michael Harty was the dominant force at the Cork Senior Cross-Country held at Carrigadrohid near Macroom where he led his East Cork club to its first title since 2017 writes John Walshe.

Harty, who had just returned forma four-week training stint in Kenya, was winning his first ever Cork senior titles and having turned 42 on Friday, is probably the oldest ever winner of a Cork senior men’s title.

His team-mate Paul Hartnett – less than half his age at 20 – stayed with him until a lap to go and ended up second. With three-time winner Tim O’Donoghue, third and Frank O’Brien fifth, East Cork were clear winners of the team title ahead of arch-rivals Leevale.

Creating his own small bit of history was Denis McCarthy of East Cork who was competing in his 40th Cork Senior Cross-Country Championship.

In Navan, Dunboyne AC made it a double at the Meath Novice Cross-Country Championships in Navan on Sunday (October 2).
Mairéad Hogan won the women’s race and led Dunboyne to team victory while Shane McCaul came out on top in the man’s race m, with Dunshaughlin best of the teams.

Only three weeks ago McCormack was fifth at the Jungfrau Marathon in the Swiss Alps. At Smarna Gora, she finished behind Austrian athletics legend Andrea Mayr who was taking her seventh win in the race in a time of 48:38.2. McCormack’s time was 50:37.6.

Below is a post race interview by McCormack with the WMRA.

At Lehigh University on Friday (September30), Charlie O’Donovan was the best of the Irish finishing fifth in the men’s college gold 8km. In the women’s gold 6km, Laura Mooney was 38th. In the men’s open 8km race, Scott Fagan was seventh.