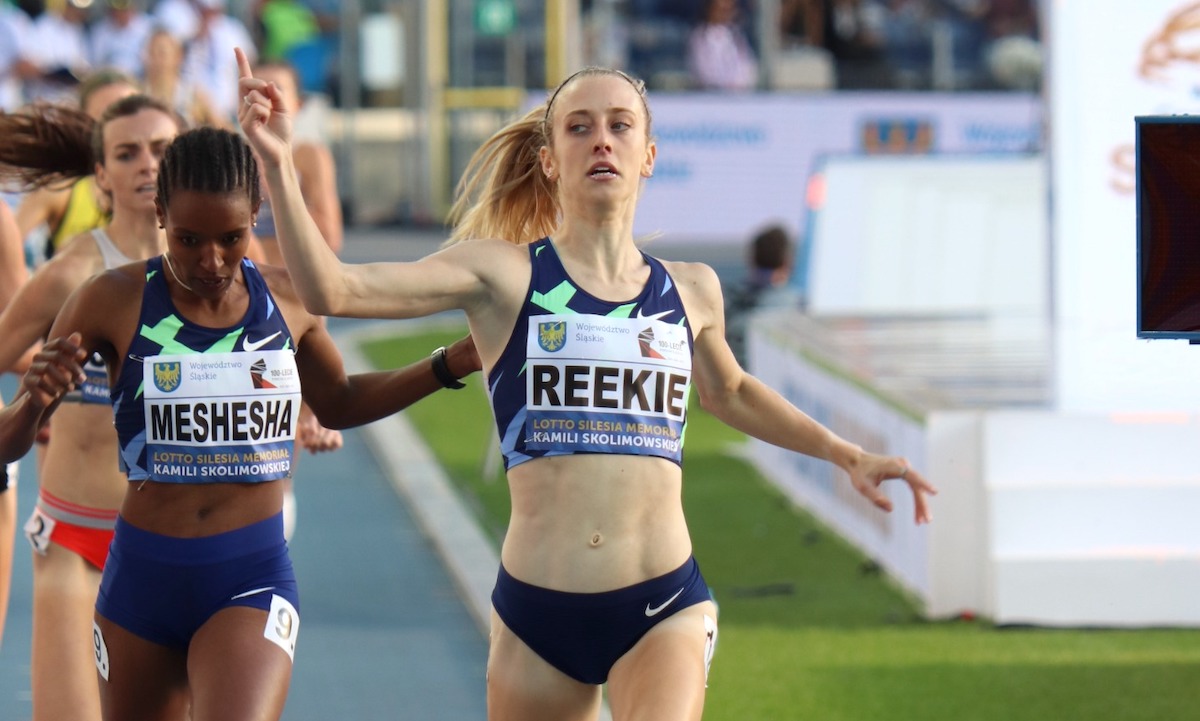 Hodgkinson and Reekie take second and third in the Brussels Diamond League before Reekie returns to win at the WA Gold meet in Poland.

Yesterday saw the first edition of World Athletics’ Continental Tour Gold meetings since the Olympics, with the Memorial Kamili Skolimowskiej in Poland.

Some stellar fields were assembled, particularly in the field events of which the Poles are so fond. There was British representation in two of the distance events, led out by Jemma Reekie who took a close win in the 1000m in 2:35.47, a new Meeting Record, the second fastest of her career over the rarely-run distance.

Elliot Giles, Daniel Rowden and Jake Wightman, in his season ending race, took to the track for 800m in a packed field including Olympic bronze medalist Patryk Dobek and Commonwealth Games champion Wycliffe Kinyamal. Roden was the first of the three across the line in 1:44.89 for third, closely followed by Wightman in fourth. We were going to label this picture, but thankfully everyone remembered their name tags. Photo: James Rhodes

On Friday, Brussels played host to the latest of the Diamond League meetings. The women’s 800m was the strongest event for GB, with Keely Hodgkinson and Jemma Reekie finishing second and third in 1:58.16 and 1:58.77 respectively. It was a thrilling race with the Brits only fractions of a second behind Jamaica’s Natoya Goule who won in 1:58.09.

In the 5000m Eilish McColgan ran 14:31.26, the 3rd fastest time in British history and just seconds off her British Record. Despite this she only ranked seventh in the race, such was the quality in Belgium.

Eilish has since announced that she’ll be making her half marathon debut at the Great North Run next weekend.

Moving onto very different terrain – at the Swiss Peaks 100k in the Swiss Valais, part of the Fast Running family Natalie White, was back for redemption on steep and technical trails. The event was part of a festival of running which included a 360km event, all the way down to a half marathon.

White, a former British and English fell running champ, excels in the rougher terrain and ran strongly throughout to finish third in 18:55. “It was very technical, rough and rocky,” said the Italy based athlete. “I was really happy to go back and finish this year after a tough DNF in 2020. You have to be in the right head space to go well through the long night in those mountains.” Sat down at the finish line at 6:00am in the morning, contemplating the journey ahead to go get the car from the start. Photo: Robbie Britton

Back on the track

On Sunday the Paddock Wood Half offered some speedy results as usual, with Nick Dawson racing home to first place in 67:51 ahead of Ben Savill (68:00) and Chris Thomas (68:08). Savill, part of the AB Training group, posted that it was quite the back and forth battle at the front with training partner Dawson and the others.

The ABP Southampton Marathon saw Sean Hogan take the win in 2:35:02, over 10 minutes ahead of Iain Trickett’s 2:46:16. Melissah Gibson had a shocker of a taper week where illness and hip problems meant she hadn’t been able to run much at all. Nonetheless she ran 2:54:16 to take the win ahead of Rosie Smiles (3:07:49).

Gemma Hillier-Moses came fifth overall and won the women’s race in a storming 78:16 at the Air Products Worcester City Half Marathon. The men’s victory went to Gary Whitehouse in 73:52.

The Garstang Half Marathon resulted in a comfortable first for Tristan Windley, running 74:44 and leaving Robert Bee in 80:54 for second place. Tori Nixon was first lady in 96:55. At Southport 10km Kirsty Longley took the win in 36:38 despite still recovering from at PB at last weekend’s Antrim Coast Half. The mens winner was Martin Peck in 33:19.

It was a bit of a local derby at the Framlingham 10k with Ipswich Harriers taking the women’s win thanks to a 39:44 from Alice Heather-Hayes and Ipswich Jaffa RC taking the men’s win after a 33:54 run from Cooper Berry.

At Britains Ocean City Half Marathon in Plymouth the men’s winner was Tom Merson in 69:46, whilst Ruby Orchard was first lady in 82:03. Wilne 10km always attracts a strong field and this year was no exception with Will Battershill (29:54) and Hannah Robinson (35:30) taking victory. Worcester City 10km was won by Omar Ahmed in 29:40 and Sally Russell in 41:03.

We finish this week’s roundup with a couple of moments that highlight two brilliant members of the running community and show the close-knit nature of our sport and the support it offers.

This weekend saw the launch of the Natasha Lewis Foundation, with a half marathon run in her memory. The Foundation will support young athletes and give them the chance to work with team Bath Athletics.

Lewis, who was tragically killed by a driver on an early morning run, was a shining light in the Bath running community and many turned out to honour her at the Natasha Lewis Foundation Half Marathon. It was not a day for fast times or results, more a case of of hundreds of athletes sharing a journey together. Team Bath AC’s Dan Jones and Bournemouth Ac’s Georgia Wood were the first athletes home.

The Leicester Road Running League wound up their competition with the Desford 5 in honour of Stuart Hall. Stuart was a keen member of the Desford Striders and had taken part in two of the league races this season while training for his first London Marathon.

He often ran multiple club bubble-runs during lockdown so that everyone who wanted to run could do so. His contribution was marked by a minute’s applause at the start of the race, which was won by Tom Mahon of Wreake Soar Valley in 26:56 and Charlie Nurse of Wigston Phoenix in 30:54.