Reekie on a roll – weekend roundup 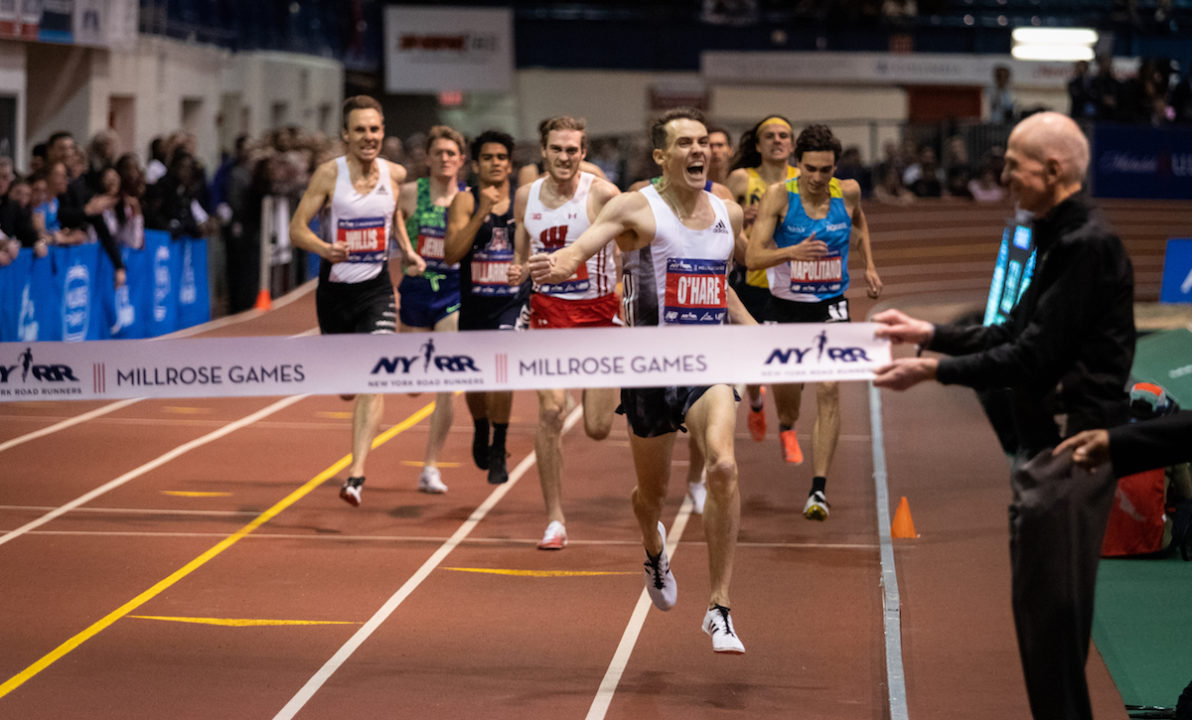 This weekend there were some fierce performances from British athletes. However, due to the ferocious conditions seen on Sunday, many races were cancelled.

Reekie makes it three in a row

Away from the challenges of Storm Ciara, the golden girl of the indoor season, Jemma Reekie, proved her newfound strength once again in New York at the Milrose Games. In the space of a week, Reekie added to her indoor 800m national record and set not only a British indoor record for the mile, but also a British record for the 1500m.

Finishing 3rd in the Wannamaker Women’s Mile, she stopped the clock on 4:17.88 just behind Germany’s Konstanze Klosterhalfen and American record setter, Elle Purrier. In the women’s 1500m, Reekie set another British record and a PB of 4:00.5, improving on the best of her training partner Laura Muir. Astonishing running from the Scottish athlete!

Chris O’Hare featured in the Wannamaker men’s mile where he was first to cross the line in an impressive 3:55.61 ahead of the Australian athlete, Olli Hoare. In the women’s 800m race, Shelayna Oskan-Clarke finished fifth in a strong 2:06.22.

And @JemmaReekie sets her second and third British indoor records of 2020!

@PiersCopeland1 so proud!! Crazy last lap to clinch it at the end! pic.twitter.com/ZkUPAWc5k5

In the Great British mud

In the Hampshire League, this year’s Southern Cross Country Champion, Jess Gibbon was in fine form once again. The Reading athlete pushed away from the rest of the field early on in the race. On a surprisingly dry yet deceptively challenging course, the athlete was able to put her fitness to the test. Gibbon finished with an impressive lead, setting up a dominant Reading victory. Teammate, Naomi Mitchell put her marathon strength to work over the 6k course and came in second. Mitchell was followed by Anna Boniface who gave a gutsy performance throughout as she continues her recent progress.

It was Southampton who came out on top in the men’s race with Jonathon Roberts securing the win. The second male to cross the finish line, just 20 seconds behind Roberts, was Alex Pointon of Aldershot. Reading AC fought to stay in the medal positions in the men’s event and it was Daniel Thorne who made it happen. Thorne secure himself third.

Before the storm set in on Sunday, plenty of athletes took to the British fields to take part in their league cross country races. England international athlete, Owen Hind, took home his first ever win in the highly competitive Surrey Cross Country League. The Kent athlete crossed the line 14 seconds ahead of fellow teammate Max Nicholls. The third male across the line was Hercules Wimbledon’s Jonathon Cornish with a strong performance.

It wouldn’t be me if I didn’t get a couple of photos as well as race. @owen_hind on way to XC victory at Lloyd Park yesterday 🏃🏻‍♂️ pic.twitter.com/LupULan08F

For the women, it was Isabel Brinsden who secured herself a Surrey League victory, improving on her second and third place finishes before Christmas. The Epsom athlete had a strong 23 second lead on Jackie Skinner of Fulham. The third woman home was Thames Harrier, Natalie Seymour.

The Metropolitan League saw some high-quality runners taking part in the final race of the league season. Elizabeth Janes (Herts) earned herself the position at the top of the podium ahead of Nina Griffiths (Highgate). In third place was U20 athlete Khahisa Mhlanga (Herts Phoenix) with a strong run.

In the Midlands Women’s League, the victory title was taken by Loughborough athlete Sophie Tarver after a strong 17th place finish at BUCS XC last weekend. Just behind Tarver in second place was teammate Giorgia Chattwood, also a Loughborough student. Chattwood also competed in BUCS last weekend and secured the silver medal in the Women’s short race. Rounding off the women’s podium was Molly Browne (BRAT), improving on her sixth-place finish in the league race back in January.

The men’s event was a much closer race. Alasdair Russell (Kendal AAC) was the first finisher with dominant margin of 20 seconds. Second and third place battled to the line with Rob Danson (Wesham RR) taking 2nd ahead of Ross Campbell of Barrow & Furness St.

The Chiltern League men’s race winner was Ben Alcock (Bedford and County AC) followed by Richard Slade (Chiltern Harriers) and George Wheeler (MK Distance Project) was in third. In the women’s event, it was Melanie Wilkins (Wycombe Phoenix) who took the win ahead of teammate Alexandra Cook. Rounding off the women’s podium was Elle Roche of Marshall Milton Keynes AC.

In the Exeter Half Marathon, Chris Rimmer of the Tavistock Run Project was the first senior male home in 1:11:43. Finn Arentz was second home in 1:12.40 followed by Donald Brooks in 1:13.05.