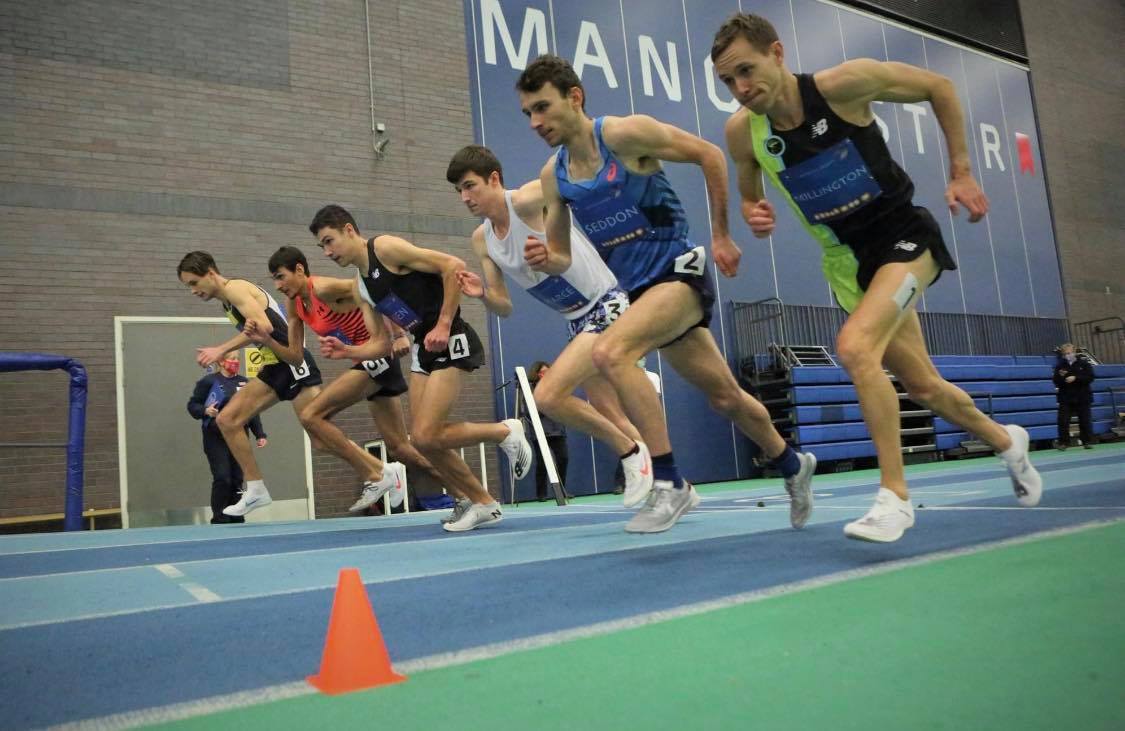 Editors intro – This week Fast Running are delighted to welcome James Rhodes to the team. James will be helping us by bringing his passion, impressive knowledge of athletics and considerable writing skill to our weekend roundups. He kicks off today…

After the madness of the previous stop on the World Indoor Tour in Lievin, it was hard to see how the New Balance Indoor GP, due to be held in Boston but moved to New York after the original venue was converted to a COVID test centre, could better it; however, there was no shortage of noteworthy performances.

In his only indoor race of the year, Jake Wightman ran an excellent 3:34.48 for second, rewarding him with a Scottish Record but just missing Peter Elliot’s 1990 British Record. It was a gutsy front run, caught by Olli Hoare in the last 100m, who ran 3:32.35 to go seventh on the all-time list with an Australian Record.

In her World Indoor Tour debut, Birmingham University’s Issy Boffey looked at home on the big stage, running confidently to come an excellent third in a big PB (2:02.45). The long journey to New York was worth it.

It was probably my favourite race of the evening and I hope it’s enough to get the reigning European U20 800m Champion a well-deserved first senior vest at the European Indoors. Adelle Tracey ran 2:04.28 for seventh.

After an exciting run by Issy, Jamie Webb took the baton for the men and ran his third 800m indoor PB in as many races, coming second with 1:46.26, behind an American Record for Donavan Brazier, who bettered his own mark by 0.01 with 1:44.21.

Two British Records were set in lesser-run events; Charlie Da’Vall Grice in the 1000m (2:17.20) and Amy Eloise Markovc over two miles (9:30.69, running a 3000m European Indoor qualifier in the process). The two races were won by Bryce Hoppel and Elle Purrier, going eight and third on the respective all-time lists.

Other notable performances included Shaunae Miller Uibo running 50.21 to go eighth on the indoor all-time list (the fastest 400m indoors since Nicola Sanders at the European Indoors in 2007), and a big PB for Ireland’s Siofra Clerigh-Buttner to go second on the Irish all-time list (4:09.67).

Elliot Giles continued his excellent form with 3:36.90 over 1500m, improving his PB set three weeks ago, although like Jake just shy of Peter Elliot’s British Record. Following two great 800m races in Lievin and Karlsruhe, it’s hard to call what would be his favoured event at the European Indoors. Doubling up could just about be possible!

Ethiopia’s Getnet Wale and Lamecha Girma, who both ran in that incredible 3000m in Lievin, were apparently targeting the World Record but fell short with 3:35.54. Ireland’s Paul Robinson and Andrew Coscoran ran 3.39.36 (PB) and 3:41.62 respectively for sixth and tenth.

What’s this, an athletics event in England? In 2021? How exciting! Sportcity was host to a series of races from 400m to 3000m as 47 athletes looked for European Indoor qualifying times, or simply just the chance to race.

Copeland’s time of 3:38.55 was enough to secure him a Welsh National Record to finish ahead of Butchart who in 3:40.82. Archer’s fine run saw her slice over three and a half seconds off her PB with 4:10.03 with Katie Snowdon just behind clocking 4:10.43.

Whilst the men’s race was a slower affair, the women’s 800m saw all five athletes go under 2:05. Four of the field contribute to a fun fact – never before have six Irish athletes run sub-2:05 in the same indoor season.

Significant credit is due to Vicente Mohdal and all the officials and coaches involved for getting the event off the ground in very challenging times, a good step forward ahead of the multi-venue British ‘Trials’ for the Europeans.

Monaco is a happy hunting ground for Joshua Cheptegai and Beatrice Chepkoech. The former broke the World Records there for 5000m on the track and 5k on the roads last year, whilst the latter smashed the 3000m steeplechase World Record on the same track in 2018.

Both headed up the fields for the traditionally fast race (both road WRs were set there) on a chilly and breezy morning. From the outset it was clear Cheptegai wasn’t going to threaten his own record, running at 13:20 pace after the first 2km. He did speed up over the last mile to win in a time of 13:13.

Following the women’s race was a bit harder. The camera focused on Sweden’s Meraf Bahta, with commentators Paula Radcliffe and Seb Coe saying Beatrice had apparently dropped from the race. It was only as she approached the finish did the camera pick up Chepkoech, just in time to see her break the tape in 14:43, breaking Sifan Hassan’s World Record – set on the same course in 2019 – by one second. An utterly strange affair.

Two Brits joined the sub-4 minute mile club with runs in the States; Yusuf Bizimana (3:57.81) at the Tyson Invitational in Arkansas and Tom Dodd (3:58.47) at the Big Ten Invitational in Ohio.

Arkansas also witnessed impressive runs by American’s Cooper Teare (3:50.39) and Cole Hocker (3:50.55), going seventh and eighth on the all-time indoor list. Australian Charlie Hunter ran 3:53.49 for third, before running 1:45.59 to set an Oceanian Record over 800m the next day.

The National Round of England Athletics’ virtual five mile road relays got underway this week, although the deadline for running has been pushed back due to the poor weather over recent days.

Members of the 50 fastest clubs in the previous round are eligible to compete, and at the time of writing the fastest times have been set by Woodford Green AC’s Phil Norman (23:02) and Guildford & Godalming AC’s – and Fast Running’s – Hannah Irwin (26:56).

Athletes have until next Sunday to register their race.

One thing I love in athletics is the combined events – they not only run fast, but do so after either 9, 7 or 5 events beforehand. This weekend saw a flurry of competitions as athletes look for scores that will get them to the European Indoors.

The men were led by Switzerland’s Simon Ehammer, who set a 6092 NR in Frankfurt behind Germany’s Andreas Bechmann (6057). A great response from Simon after NHing in the pole vault last week’s Swiss Combined Event Championships.

I know we are running-focused here, but a congratulations is deserved to KC Lightfoot who has become the 25th member of the 6m club in the pole vault, clearing the height in Texas.