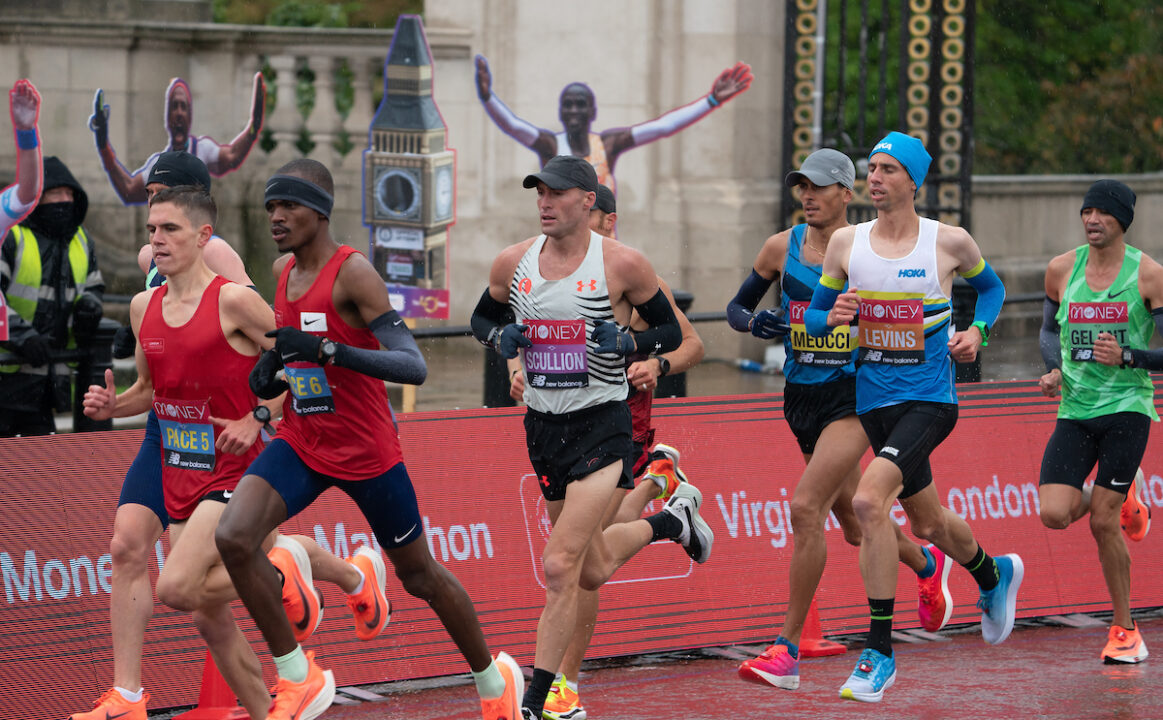 In a weekend of wet weather at home and abroad, Irish athletes showed their resilience to record some excellent results, reports Lindie Naughton.

Scullion’s time is faster than John Treacy’s official Irish record of 2:09.56 set at the Los Angeles Olympics of August 1984 when his gutsy run brought him a memorable silver medal. In April 1988, Treacy ran a faster time of 2:09.15 at the Boston Marathon, which because of the course’s slight downhill profile, is not considered legal for record purposes. He finished third in that race.

In a vastly changed athletics world of today, where pacemakers are the norm and shoe technology is helping re-write the record books, Scullion’s time, though excellent, saw him finish only 11th in London.

Despite the autumn weather, he ran at a consistently strong pace to finish second European behind Norway’s Sondre Nordstad Moen, who was ninth in 2:09.01.

In the women’s race, Mayo woman Sinead Diver finished eighth and first W40 in 2:27.07. Diver was representing her adopted nation of Australia. Her best marathon time of 2:24.11 was set at the London Marathon of 2019.

Locally, leading home 196 finishers at the Les Jones Memorial 5km in Belfast on Saturday (October 3) was Darragh Crossan of Foyle Valley AC in a time of 15 mins 41 secs. Peter McGarry of North Belfast Harriers was second in 15:52 while in third place, Conal McClean of St Malachy’s AC was the first of four junior athletes finishing in the top eight. His time was 15:57.

At the My Run Club Series with Avondale Sports Day 4 in Rathdrum, Co Wicklow on Thursday (October 1), junior athlete Joe Byrne of Sliabh Bhuidhe Rovers AC was the winner in 16 mins 26 secs. Derek Crammond of Parnell AC was second in 16:40 and Niall Sheehan of Gowran AC third in 16:44. Myles Gibbons of Sliabh Bhuide Rovers AC in fifth place was the first master in 17:12.

Catherine O’Connor of Parnell AC underlined her recent good form by finishing first woman and first W40 in 18:58. Her Parnell clubmate Sheila O’Byrne was second in 19:32, with Corrine Kenny of St Laurence O’Toole’s AC in Carlow third woman and first junior in 20:55. Sarah McCormack of Ambleside AC completed a great weekend for Irish mountain running when she finished first woman at the Trofeo Nasego, a classic 21.5km race with 1,336m of climb, in Caso, Italy on Sunday (October 4).

McCormack, the World Cup winner last year and pre-race favourite, completed the gruelling race in 1 hr 52 mins 32 secs. Although she had gone into the lead in the first half of the race, she struggled on the tough climb.

When no-one managed to catch her, she gave it her all on the downhill to the finish. Over a minute behind for second was Francesca Ghelfi of Italy in 1:53.36, while third in 1:54.34 was Elisa Sortini also from Italy.

A day earlier, Zak Hanna of Newcastle and District AC had finished a fighting second at the Vertical Nasego at the same location – 4.4km uphill race with a 1000m climb.

In difficult weather conditions, Hanna led the race until the final 500m when pre-race favourite Henri Aymonod of Italy pushed to the front. He went on to win in 35 mins 47 secs with Hanna second in 36:22, followed by Patrick Facchini of Italy in 37:01. A total of 67 finished the race.

At the Kip Keino Classic in Nairobi, Kenya on Saturday (October 3) , Sean Tobin of Clonmel AC finished ninth in the men’s 1500m in 3:49.92 while Michele Finn of Leevale AC was tenth in the women’s 3000m steeplechase in 10:31.19. The town’s altitude of 1795m might not have been beneficial for the visiting sea-level runners.

Cross country all over the country

O’Donoghue proved the class of the combined senior and intermediate field winning in 17 mins 46 secs, with Murna Griffin of Dooneen AC second in 18:25 and former Irish international Rosemary Ryan, also of Dooneen AC, third in 18:25. With five in the top seven, Dooneen took the team title ahead of West Limerick AC, who were led by Fiona Burke in fifth place.

Winning the men’s title in 27 mins 28 secs was Niall Shanahan of An Bru AC. A close second in 27:33 was Declan Moore of Bolboa AC, with John Kinsella, also Bilboa, third in 27:53. West Limerick won both the inter and senior team titles; Limerick AC was second in both with Dooneen AC third inter team and Bilboa third senior team.

Events for all ages

Over 60 women turned out for the Cork Novice and U23 Cross-Country held at Slieveroe, Riverstick, on Sunday (October 4).

Leading them home was Leevale’s Emily Knox in 15 mins 53 secs; Irene Eighan of St Finbarr’s AC was second in 16:32 and Joyce Wolfe of Leevale third in 16:35. Winning the U23 category was Katie Walsh of Carraig na bhFear AC. Best of the ten teams entered was St Finbarr’s on 23 points, with Leevale second on 46 points and East Cork AC just a point behind for third place on 47 points.

Surprise winners of the team title with 43 points was Cork Track Club, led by Anton Marcotte in sixth place. Watergrasshill AC was second on 48 points and Leevale AC a close third on 50 points.

Multiple races across the country

Navan Adventure Centre was the location for the Meath Junior, Novice and Masters Cross-Country held over two days on Saturday and Sunday (October 3/4) where on Saturday, Niall Cornyn , better known as a triathlete, won the men’s 6km race ahead of his Dunboyne AC clubmate, George Snee. Cornyn finished in 20 mins 10 ses, with Snee, who was also first M35, clocking 20:37 and Richie Bell of Fr Murphy AC a close third and first M40 in 20:39.

Dunboyne AC was first of the 15 teams entered, with Trim AC and Dunshaughlin AC in the minor placings. Dunboyne also proved best in the M35 masters team catgory, ahead of Dunshaughlin AC and Trim AC plus 17 other teams. Winning the M50 team category were Trim AC from Na Fianna and Dunshaughlin.

A day later, Edel Gaffney of Trim AC won the women’s 4km race in some style.

Her finishing time of 15:38 put her well clear of Sarah Clarke of Na Fianna AC who finished in 16:12 and Ellen Vitting of Trim AC in 16:16, with Vitting, another triathlete, also first W35.

In the novice team category, Dunboyne AC beat Trim AC and Na Fianna AC, with Dunboyne also best of the masters teams ahead of Trim AC and Star of the Sea AC.

U18 athlete Sarah Rowland of Naas AC won the women’s 3km race at the Kildare Novice, U18 and Masters Cross-Country in Coolcarrigan House and Gardens, Naas on Sunday (October 4),

Rowland’s time of 11 mins 33 secs put her six seconds clear of Joan Kinsella from Clane AC who was first W40. Third and second under 18 was Orla Reidy of St Coca’s AC in 11:51.

Making it an U18 double in the men’s 4km race was Eoin Richards in 12:50. His St Coca’s AC clubmate Alexander Walker was second and firast M40 i 12;54, with Brian Conroy of Clane AC thrid and first M35 in 13:09. In the other age categories, Derek Gilmartin of Celbridge AC was first M45, Christy Maloney of Clane AC first M50Frank McDonald of Celbridge AC first M55, and Brian McGrath of Le Cheile AC first M65.