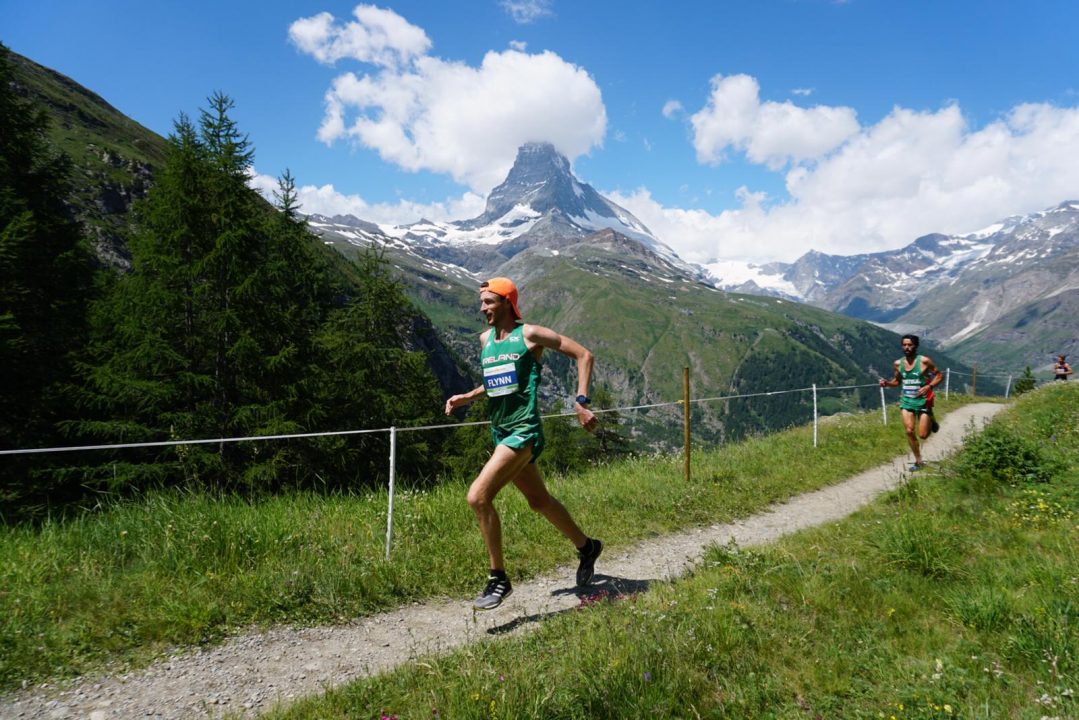 Eoin Flynn in full flight on his way to 42nd place in 59:47. Photo: Robbie Britton

From London to Zermatt and over in Australia, Irish athletes were in action across the globe this weekend. Here’s your weekly round-up of Irish running.

On the promise of fast running and great crowds, several Irish athletes were hunting quick times at the Night of 10,000m PBs in London on Saturday evening (July 6) .

Ryan Forsyth, along with Mat Bergin of Dundrum South Dublin AC, was running in the men’s B race, where – on the eve of his 23rd birthday he finished a creditable eighth place in a PB of 29:01.27. Bergin unfortunately was forced to drop out. Totten finished sixth in the men’s D race in another personal best of 30:31.50. Further across the field in Australia, was the Gold Coast Half Marathon. There were some cracking female performances, with the top two athletes crossing the line in under 70 minutes. The Irish-born Australian long-distance runner, Sinead Diver, took gold in a beaming time of 69:45. Diver was closely followed by Ellie Pashley, only five seconds behind in 69:50. Just above the 70-minute mark was Lisa Weightman in 70:30.

10 miles on the road

Mick Clohisey and Michele Finn proved the class of the fields at the Roscommon 10-Mile road race, held on Saturday (July 6)

Clohisey of Raheny Shamrock, finished in 48:56, just off his course record time of 48:47 set in 2017. It was a thrid consecutive win for the current national marathon champion who also won last year in 49:31. David Flynn of Clonliffe Harriers was second in 49.32 and Hugh Armstrong from Ballina AC third in 51.06.

In the women’s race, Finn’s time of 58 mins 47 secs was a new course record. The Leevale athlete, who ran the steepechase at the Rio Olympics, has been in impressive form recently running a personal best 15:45.55 for 5000m as well as 9:51.22 for the steeplechase.

Behind her, Mary Mulhare of Portlaoise AC picked up valuable KIA Race Series rankings when finishing second in 60:40. Leevale’s Sinead O’Connor, who topped the KIA rankings going into the race, finished third in 61.13. Mulhare and O’Connor are now tied on 10 points apiece.

Paddy Sharkey of Longford AC, fourth place overall, was first M40 in 55:02, while Caroline Donnelan of Edenderry AC was first W40 in 63:11 ahead of Maria McCambridge of DSD AC who finished in 65.25. First M50 was Brendan Donagher of Naomh Mhuire AC in 59:06; Maura Dervin of Mullingar Harriers in 74.15 was first W50.

Of the nine races in the KIA Series, just three remain. Next round is the Edenderry 10-Mile on Sunday 12 July.

Ireland has won promotion to the European Combined Events Teams Championships first league after finishing second in the second league held in Ribeira Brava, Madeira over the weekend (July 6/7). Ireland with a total of 35821 points finished second behind Belgium on 35865 points and comfortably clear of Denmark on 34240.

All three of the Irish men achieved personal best scores in the decathlon with Michael Bowler from Enniscorthy AC finishing second individual. Bowler had dropped back to third after the hurdles and discus on the second day of competition, but pulled back to second thanks to a 4.50 in the pole vault, an event in which he is national champion. He ended up with 7379 points thanks to strong performances also in the 100m, long jump and hurdles.

Pulling up from sixth to fifth place overnight was Shane Aston of Trim AC , whose throw of 59.05 in the javelin was the best in the competition and moved him up again into fourth place overall. His total of 7231 added 162 points to his previous best set last last month at the UK Championships.

Completing his first decathlon in some time for 14th place was Rolus Olusa of Clonliffe Harriers, whose best points came in the hurdles. He ended up with a score of 6626 which added eleven points to his previous record.

Finishing a fighting seventh with a personal best 5114 points was 18-year-old Anna McCauley of City of Lisburn AC, whose biggest points came in the hurdles, high jump and 200m and who recored a personal best 11.08m in the shot. Sarah Connolly pf North Down AC just missed out on her best of 5031 from last month with a score of 4990 for 11th place, while Laura Frey of Lagan Valley AC produced a good time of 2:17.72 in the 800m and finished 20th with 4481 points.

Two thrilling 800m races proved the highlights of the Athletics Ireland Junior and U23 Track and Field Championships held in Tullamore on Saturday (July 6).

First up were the junior girls, where Sarah Healy of Blackrock AC was the pre-race favourite. As it turned out, she was given a race for her money, only winning in the sprint for the line from Jo Keane from Ennis TC. Healy’s time was 2:11.40 with Keane timed at 2:11.56.

Even closer was a tactical men’s 800m, where Darragh McElhinney of Bantry, fresh from his Irish junior 3000m record of a week earlier, was the expected winner. As it turned out, it was Louis O’Loughlin of Donore Harriers who won the race in a blanket finish. O’Loughlin was given a time of 1:54.00, Mark Milner of Mullingar Harriers was second in 1:54.01 and McElhinney third in 1:54.02.

In the junior women’s 100m, there were no surprises when Rhasidat Adeleke of Tallaght AC was a clear winner in 11.80 secs with her training training partner Patience Jumbo Gula of Dundalk St Gerard’s AC second in 12.00 secs.

With no Aaron Sexton on the start line, Reality Osuoha of Fingallians AC was the winner of the junior men’s 100m in 10.95 secs. Michael Farrelly of Raheny Shamrock was second in 11.00 and Ryan O’Leary of Leevale AC a close third in 11.01.

In the junior women’s javelin, heptathlete Kate O’Connor of Dundalk St Gerard’s AC improved her own championships record to 48.98m, although it was off the 49.46m she threw at the Leinster Schools Championships in Santry last May. O’Connor, who heads for the European U20 Championships starting on July 18, also won the long jump with 5.98m and ran a personal best 24.88 in the 200m heats, opting out of the final.

In the U23 women’s pole vault, Ellie McCartney of City of Lisburn, a 19-year-old student at Brunel University and the current British Universities champion, won with a personal best vault 4.01, improving on her own national junior record of 4.00 set last month in Bedford. It puts her fourth on the all-time Irish rankings

Notable U23 winners on the day included Ciara Neville of Emerald AC winner of a quality women’s 100m in a time of 11.69, with Molly Scott of St LOT AC second in 11.74 and Sarah Quinn of St Colman’s South Mayo AC third in 11.90. Scott went on to win the

100m hurdles in 13.71 secs with Kate Doherty of Dundrum South Dublin AC second in 14.04 and multi-eventer Elizabeth Morland of Cushinstown AC third in 14.08. Morland, who competes in the heptathlon at the European U23 Championships starting next Thursday in Gavle, Sweden, later won the long jump with 5.98m and finished second in the shot with 11.72m.

Mark Smith of Raheny Shamrock won the men’s 100m was in 10.74 secs, with Joseph Ojemumi of Tallaght AC second in 10.77 and Michael McAuley of Ballymena and Antrim AC third in 10.84.

Michaela Walsh of Swinford AC dominated the U23 women’s throws, winning the hammer with 58.63, the shot with 13.57 the javelin with 37.42 and weight for distance with 6.40. Best in the discus was Niamh Fogarty of Raheny Shamrock AC with 51.02, while winning the men’s hammer with 64.51 was Owen Russell of St Andrew’s AC.

At junior level, the men’s hammer was won by Sean Mockler of Moycarkey Coolcroo AC with a 68.06 effort in the fifth round. In the shot, a 16.72m throw gave the title to James Kelly of Finn Valley AC. Winning the junior high jump with 1.80m was Sommer Lecky of Finn Valley AC.

At the second round of the Athletics NI Team Trophy on Saturday (July 6), Lagan Valley AC came out on top in the women’s competition with a total of 186 from the two rounds. City Of Derry Spartans were second with 171 points, and City of Lisburn third on 1178 points. Lagan Valley AC has qualified in fourth place for the division 1 final of the National Track and Field League in Tullamore on July 20.

Clear winners of the men’s competition with 193 points were City of Derry Spartans. Lagan Valley on 127 were second and City of Lisburn third on 117. City of Lisburn AC has qualified for the men’s first division final of the national league finishing third overall on points after the two qualifying rounds.

Sarah McCormack and Zak Hanna were Ireland’s best performers at the European Mountain Running C’ships on an uphill only course in the foothills of the Matterhorn in Zermatt, Switzerland on Sunday (July 7).

In the women’s senior race, McCormack finished a solid 16th in 66 mins 58 Secs. Race winner for a third year was Switzerland’s Maude Mathys in 60:18 [Worth noting that in 2015 Mathys was reprimanded for an ADRV for using clomiphene- Editor]; six times world champion Andrea Mayr of Austria, now aged 39, was just over a minute behind for second.

In a quality men’s race, Hanna did well to finish 19th in 57 mins 27 secs, just over four minutes behind the winner, Britain’s Jacob Adkin, who finished in 53:21.

In the junior men’s race, Ronan Maguire was best of the Irish in 24th place, with Tony McCambridge of St Malachy’s AC not far behind in 28th. In the women’s junior race, Aoife Coffey of Lucan Harriers was 22nd. Eoin Flynn in full flight on his way to 42nd place in 59:47. Photo: Robbie Britton

Killian Mooney of Dundrum South Dublin AC proved the class of the field in the Leinster Evening League 9km race at Trooperstown in Co Wicklow on Wednesday (July 3), finishing over half a minute ahead of the chasers in 41 mins 27 secs. Second in 42.01 was Barry Minnock of Rathfarnham WSAF AC who was also first M40. In a double for DSD AC, Grace O’Rourke won the women’s race in 52:12. Patricia McLoughlin of Le Cheile AC was second and first W40 in 57.26.

Sergiu Ciobanu of Clonliffe Harriers was the winner of the Robbie Steele Memorial Corkbeg4-Mile in Co Cork on Thursday (July 4) with a time of 19 mins 43 secs. Kevin O’Leary of East Cork AC was second in 20.38 and Sharon Cleere from Thurles first woman in 24:16.

At the Coillte 10km, in Dundrum, Co Tipperary also on Wednesday (July 3), David Mansfield of Clonmel AC was first home in 31 mins 4 secs, with the top five men all funder 32 minutes. First woman was Siobhan O’Doherty of Borrisokane AC in 36:49.