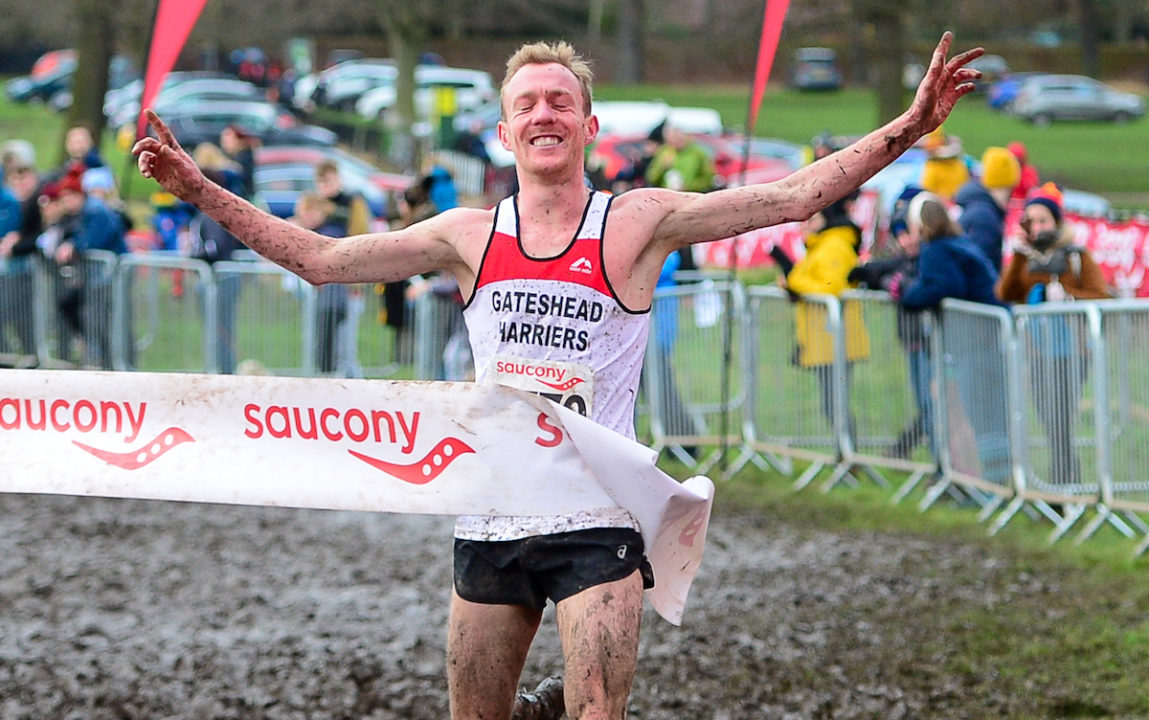 It was a busy weekend of racing from the British Indoors to the National XC Champs to the streets of Seville, Gill Bland rounds up a busy weekend

Olympic standards for Mellor and Seaward in Seville

The first big-ticket European marathon of the year Seville Marathon did not disappoint with fantastic results for lots of athletes, some jumping into the distance at the last minute after Tokyo plans were cancelled.

Jonny Mellor ran a stunning PB of 2:10:04 to take over two minutes off his previous best and finish 23rd in an Olympic qualifying time. Mellor work the whole race in a strong group which included UK based Kiwi Malcolm Hicks (2:10:03).

The group also include Kevin Seaward who ran a stunning negative split of 2:10:08  – a new Northern Ireland Marathon record (the 3rd time the record has fallen in the last five months), a PB and an Olympic qualifying time.

Big PBs for Gyurko and Pascall

It wasn’t just the men who had a great day out in Spain either, Fanni Gyurko of Central AC ran a PB of 2:35:54 to finish 18th. Beth Pascall, who can normally be found in the mountains and running 100 miles, took her strengths to the roads and came back with a sub 2:50 as a reward. She finished 26th in 2:48:06. Team New Balance athlete Jip Vastenburg produced a stunning debut performance of 2:33:38.

Abingdon AC’s Sarah Dudgeon made lemonade out of a Corona-virus lemons by ditching the taper and grabbing a last minute spot in Spain when her Tokyo dreams were cancelled. The perseverance paid off and she absolutely smashed the sub-three barrier that has cruelly eluded her until now, running a brilliant 2:55:27.

Jane Faram of Southville AC took over 3 minutes off her PB to run 2:56:38 flat while Adrienne Jordan of Crusaders AC also ducked under the magic three mark with a 2:58:45.

We believe Mick Clohisey and Gladys Ganiel stopped after 30km.

Melissa Courtney-Bryant won the women’s 3000m in a slow tactical race crossing the line in 9:48.54. After a strong cross country season last year Verity Ockenden moved indoors this year and she claimed herself a silver medal running 9:50.39 as Dorset athletes finished first and second. Rosie Clarke was 3rd in 9:52.02.

Earlier in the week on the indoor circuit, Andrew Osagie ran an eye-watering 2:19.31 to take second place in the 1000m at the World Athletics Indoor Tour  in Lievin, France. Charlie Da’Vall Grice was fifth in 3:38.95 in the 1500m.

Some area XC matches have been cancelled recently, but there was no risk of that at any of the four national XC Championships taking place this weekend. Indeed, Nottinghamshire council are quoted as having said “it will not be cancelled because of the state of the course” and they were right.

Despite a pond-like finish, at the Saucony English National XC Championships in Wollaton Park effort levels were the same as always in a #muddybrilliant day of racing. Times were slower but not less hard fought than last year.

For the Senior Women, 8k was the challenge and it was UK based Dane Anna Moller running for AF & D who blasted round the course fastest in 32:59. In a re-run of the BUCS Cross Country Champs earlier this month Moller finished ahead of Jess Judd (Blackburn Harriers & AC) who ran 33:20 – an upgrade on her third place last year. Bronwen Owen of Leeds City AC took bronze with 33:45 up from 14th place last year.

Jess Gibbon of Reading AC ran a storming race to finish fourth in 33:56 –  a fantastic follow up her win at the South of England Champs in January. In the Senior Men’s race Calum Johnson (Gateshead Harriers) was crowned English Champion over 12k in 43:36 after convincingly holding his own against Joe Steward of East Cheshire Harriers and Tameside AC whose 43:59 resulted in a big jump up the ranks from his 9th place last year. Johnson became the first Gateshead Harrier to win the National Cross since Brendan Foster in 1977.

Linton Taylor of Leeds City AC also leapfrogged up the placings to go from 12th to a Bronze spot this year in 44:13. Adam Hickey (Southend on Sea AC) couldn’t quite grab a podium spot but can be pleased with 44:24 for fourth place after losing his shoe at the start of the race – all detailed on this Twitter.

The Junior Women (6k) stepped up to the plate just after 1pm and it was  Amelia Quirk of Bracknell AC who took the win in 25:33. For the Junior Men (10k) Zakariya Mahamed declared himself champion for Southampton AC in 36:27.

The U17 Women’s race (5k) was the first race of the day and it was  Rushcliffe AC’s Maya Todd McIntyre in 21:49 who got everyone paying attention by boosting her standings in style from 8th place in last year’s race to take the win this year. Will Barnicoat of Sale Windsor Slough Eton ran his 6k in the fastest Men’s U17 time of the day, 22:42.

Kiya Dee (Highworth AC) stepped up from silver in 2019 to take the top spot this year in the U15 Girls’ with 18:35 for 4k and Lewis Sullivan ran the same distance to give Saint Edmunds Pacers the premier spot in the U15 boys race. Alden Collier of Chiltern Harriers narrowly won the Under-13 boys race in 14:21 and clubmate Zoe Glbody grabbed gold in the Under-13 girls race (both 3k) in 15 minutes flat.

The Lindsays Scottish National Cross Country Championships took place in the midst of hail Storms at Callendar Park. In the Senior Women’s race Mhairi Mclennan (Inverness Harriers), who was fourth last year finished a convincing first in 39:44, finding her way back to form and regaining her 2018 title  ahead of Annabel Simpson of Fife AC (40:14), and bronze medallist, Moira Stewart (40:46) of Cambuslang Harriers.

Stephanie Penycook opted to forgo the option to take an English racing spot now that she runs for Leeds City. She stayed true to her Scottish roots and was rewarded with a fourth place in 41:18 for Fife AC.

Jamie Crowe raced hard against Jonny Glen of Inverclyde AC and ultimately came home with a gold for both himself and Central AC in the Senior Men’s and club competition (35:29 and 35:43). That’s ten years in a row now that Central AC have bagged the club title – quite the winning streak.

Crowe told BBC sport afterwards that he couldn’t feel his hands for the whole race!  Kevin Wood of Fife AC took the final podium spot in 36:06 and Andrew Douglas of Inverclyde AC was fourth by one second in a tantalising 36:07.

Hunt and Wilkins overcome the wind to take Welsh Champs

The 116th Welsh Cross Country Championships at Pembrey Country Park saw a clean sweep at the top for Cardiff Athletics. James Hunt was crowned Senior Men’s champion over 10k in 31:58  and with a good lead over club mates Ciaran Lewis (32:22) and Dan Nash (32:29). Dewi Griffiths was fourth – we’re all delighted to see him back racing!

Unsurprisingly the team topped the club competition too, with Swansea Harriers and Pontypridd Roadents AC having to settle for second and third.

The Senior Women’s race was a more varied affair – it was Melanie Wilkins (Wycombe Phoenix) who will spend 2020 as Senior Women’s Welsh XC champion thanks to her 26:45 over 7k. Lauren Cooper of Parc Bryn Bach RC took silver in 27:18 and Cardiff AC made sure they weren’t out of the medal spots in this race either, thanks to Rebecca Evans and her 28:03.

The dominant team of the day reign again in the women’s club competition as Cardiff AC finished ahead of Lliswerry Runners and Les Croupiers RC. A full write up of the Welsh XC Champs can be found here. The NI & Ulster Senior XC Champs had only ‘light hail’ to contest with, so practically perfect conditions, right?  Neil Johnston of Springwell Running club capitalised on those oh-so-balmy conditions to claim champion’s rewards in 44:47. Annadale Striders’ Eskander Turki was second in 45:06 ahead of Mark McKinstry (N Belfast Harriers) in 45:47 and Patrick McNiff (Newcastle AC) in 45:53.

The Senior Women’s champion for NI & Ulster is Emma Mitchell (Clonliffe Harriers) with a 24:09 run. Silver went to on-form Catherine Whoriskey (City of Derry, 24:47) and bronze to Lauren Wilson (Lagan Valley) in 24:53. Sarah Laverty of Beechmount Harriers was just outside the podium in 25:02. In the team results, North Down AC topped the women’s competition and Newcastle AC nabbed the men’s win.

Gusty conditions let to a fartlek-type run for those taking on the seafront at Brighton Half Marathon. Kevin Moore broke the tape in 69:05 with a reasonable lead over Neil Boniface in second (69:17) and Paul Martelletti in 69:40. Sheffield RC’s Phillipa Williams topped the women’s podium in 77:55 ahead of Woodbridge Shufflers’ Heather Noone (79:53) and Maisie Trafford (1:21:08).

Similarly tricky conditions were not the only problem at Wokingham Half did not deter Lousie Damen (Winchester & District) who showed true grit to finish in 76:23. Hercules Wimbledon’s Claire Grima was second in 78:48 and Rebecca Ducbury of OXford Tri was third in 79:35.

Hercules Wimbledon were in action in the men’s race too. Their athlete Jonathan Cornish took the win 67:13 with enough clear road between him and Nick Torry of Serpentine RC (67:39)  to catch some breath. Joe Wade of Ryde Harriers was shortly behind in 68:01.

It wasn’t just wind that was the issue at Winchester 10k as some athletes were sent the wrong way, adding over half a mile to their race. Congrats to the men’s winner Andy Greenleaf and George King on second place – we’re working on finding out the full results…

Annabel Gummow was first home for the ladies. Her chip time was 73:07 but she had a gun time of 75:38 so the Winchester athlete was either very late getting to the start or something is slightly up with the chip readings. Either way she had a massive lead over Tessa McCormick (1:21:26) and Cyn Cano (1:29:48) in 2nd and 3rd.

Yesterday the Sri Chinmoy 10k in Battersea Park lived up to its reputation for being a swift one. Local club Clapham Chasers took the win in 31:36 thanks to Nick Bowker who held out over William Woodcock (31:41) who hails from just down the road at Hercules Wimbledon. Ben Shearer of Cambridge Harriers chased them both home to take third place in 31:44.

For the ladies, Clapham were again victorious. Laura Bohm ran 37:01 for first with a massive lead over Amy Billups of South London Harriers who finished in 39:28. Kelly Morgan (London Frontrunners) was third in 40:37.

Lucy Davies crossed the line first in 39:06 at the  Runthrough Hyde Park 10k and Alberto Ugarte took a convincing victory in 32:49. Hannah Pullen ran the only sub-20 in the women’s 5k to take the crown in 18:06, not far behind the men’s winner Nacho Garcia who finished in 17:54.

Last, but certainly not least, Ry Webb of Waverly Harriers was out in Espoo, Finland for the Endurance 24hr that was held entirely indoors on a 390m track. The ruggedly handsome Robbie Britton lookalike ran an excellent race and finished third with 232.3km, which was a 16km PB.

Both first and second broke their national records with Ed McGroarty besting Eoin Keith’s Irish mark with a wonderful 249.761km for second place. Sweden’s Therese Fredriksson was the winning female with over 222km and fourth overall in a race that saw many ups and downs.