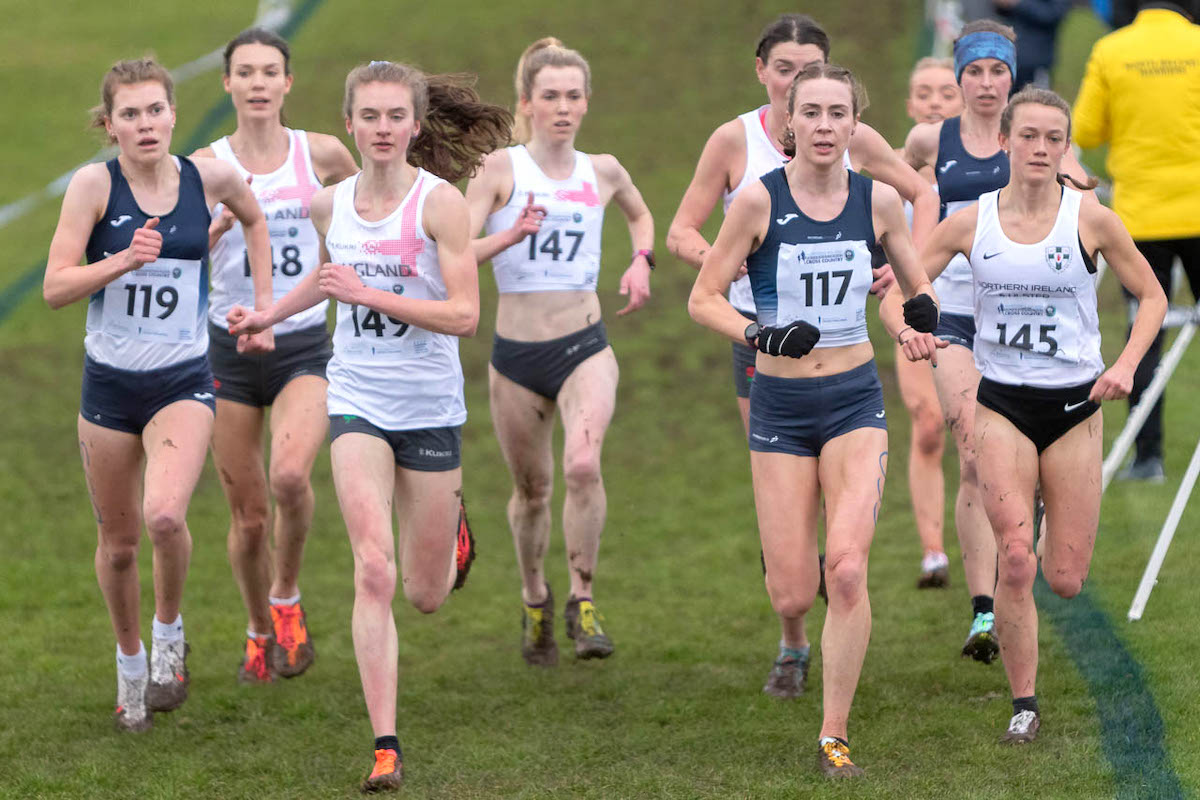 Behind Obiri, Grace Carson 9th and first for the NI and Ulster U23 team, Niamh Allen for Ireland who finished, 12th and Fionnuala Ross who was 13th for NI and Ulster all had solid runs.

With Catherina Mullen in 17th place, NI and Ulster finished second behind England in the Home International and won the Celtic Cup ahead of the Ireland team and Wales.

Scotland beat Ireland in the U23 race, with Ireland taking second on count-back from NI and Ulster. First home for the Irish U23 team was Danielle Donegan in 15th place.

English athletes dominated the men’s 10,000m race with Zak Mahamed the winner from Italian athlete Illias Ouani. Ryan Creech in sixth place was leading Ireland to team victory in the Celtic Cup, with Emmett Jennings and Eoin Everard making up the team. U23 title for Battle, Devaney and Devane

Ireland’s trio of Jamie Battle, Thomas Devaney and Donal Devane won the U23 title beating Scotland by a single point.
Sean Casey and Scott Fagan of Metro St Brigid’sAC finished second and third in the U20 men’s 6000m race, chasing home Sam Mills of England who won in a time of 18 mins 17 secs.

With Harry Colbert eighth, the Irish team had a comfortable victory over Scotland , Wales and Ni and Ulster in the Celtic Cup.

In the senior and masters’ open 4000m race, Ethan Dunne of Loughview AC was the winner in 13 mins 35 secs. For second place, David McNeilly beat his Newcastle and District club mate Daniel Molloy and also finished first M40. First M50 was Declan Power of Clonliffe Harriers in eighth place. Of the women, Allie Chong of Giffnock North AC, Catherine O’Connor of West Down AC and Roisin Rocks of Newry City Runners, all of them masters, were the top three.

On a busy day for cross-country, Laura McDonnell won the women’s two-mile by over a minute at the Eir BHAA races held in Tymon Park.

McDonnell who finished in 12 mins 31 secs was followed home by Sinead Tighe and Emma Doody. Back running after an accident last year was the Anne Woodlock who finished first W80. Woodlock is training for next month’s European Masters Indoors in Braga. Best of the teams was the Teachers trio of Anna King, Mary Jennings and Evelyn McNelis; all of them over 60 (at least) and lifelong runners.

Colm Turner, of the Gardai squad, who had finished second in the Bank of Ireland race a week earlier, went one better this time, racing away from the chasers in the men’s five mile, crossing the line in 27 mins 38 secs. Michael Kiely of Nypro Ltd was second and Ross Collins of Central Bank third.

Ciaran Diviney of AIB was fourth and first M45. In the older age groups, Jack Tyrrell of the Agriculture group was first M65 and Niall Mathews of RTE first M70.

Turner was leading the Gardai to team victory in grade A with TCD second. The Teachers won grade B, host club Eir grade C and Dublin Bus grade D.

Correction to last week’s BHAA report: Ieuan Hopkins, winner of the Bank of Ireland race is not the Welsh steeplechaser, but a local member of the Bros Pearse club.

Martin Hoare of Celbridge AC was the winner of the Ballyroan 10-Mile in Co Laois on Sunday.

First woman in 11th place was Siobhan O’Doherty of Borrisokane AC in 58:04. Sligo athlete Isabel Oakes was second in 58:59 and Jennifer Montague of Leevale AC third in 60:21. Elaine Slattery of Ennis TC was first woman and first W40 in 36:12. In Cork, Gavin O’Rourke of Eli Lilly had a clear victory at the IFF-FMC 6km in Little Island, the first Cork BHAA road race of the year, writes John Walehs.

O’Rourke covered the seldom-run distance in a time of 18:35, giving him a comfortable 43 seconds to spare over Jeremy O’Donovan, also from Eli Lilly, who was second and first M40. With Joe Cunningham fifith and first M50, Eli Lilly on just eight points finished first of the grade A teams with a massive 78-point margin ahead of Stryker on 86 points. UCC was third on 120 points.

Third across the line was guest runner Darragh Mulcahy with the Aidan Noone of the Dept of Education fourth.

Winner O’Rourke, a native of Rush in County Dublin, has been working at the Kinsale-based Eli Lilly for over three years. A member of Leevale, where he is coached by Donie Walsh, he led the Cork club to the National Novice C-C title in December when finishing in a fine 10th place overall. His next outing will probably be in Raheny next Sunday where Leevale are expected to field a strong contingent.

Two regular winners on the Cork circuit, Sinead O’Connor and Martina Kiely, fought out the women’s race with O’Connor coming out on top by just five seconds in a time of 20:39. As both were representing the Dept of Education, the team prize was never in doubt as only two scorers count in the Cork BHAA races.

In third was Clare native Sharon Rynne of Kepak in a time of 21:55 with non-registered Carol Finn fourth in 22:03.

The total of 330 finishers showed that the Cork BHAA are getting back to its previous numbers with the next event, also over 6km, the Janssen promotion at the same Little Island venue on Sunday, February 13. Ciara Mageean of City of Lisburn AC won the women’s 3000m in an indoors personal best of 8:47.24 at the Manchester World Indoor Tour meet on Saturday (January 22). Mageean chased down and then pipped Albania’s long-time leader Luiza Gega by three tenths of a second, after a thrilling last lap. Both athletes were under the World Indoor qualifying time of 8:49.00.

Hiko Tonosa of Dundrum South Dublin AC finisheds econd in the men’s 3000 at the Meeting National Indoors in Lyon, France on Friday (January 21) with a time of 7:56.22. Tonosa was outsprinted in the chase for the line by Dutch athlete Tim Verbaandert. The World indoor qualifying time is 7:50.00.

Highlight of the second Indoor League round at Athlone on Sunday (January 23) was a men’s 1500m, where Mark Milner of UCD AC was the winner in 3:47.13. In the battle for second place, Conall Hayes of Le Cheile AC just pipped Colin D .Smith from Mullingar Harriers with the pair timed at 3:48.59 and 3:48.95.

Running in the same heat of the women’s mile were Ava O’Connor and Fiona Hawkins. O’Connor finished fifth in 4:57.88, with Hawkins one place behind in 4:58.90. In the 800m, O’Connor ran a time of 2:16.53. All three athletes are students at Adams State in Colorado.

Sorcha Moloney of Ballyroan-Abbeyleix and District , a student at McNeese, ran a time of 5:10.53 to finish fifth in the women’s mile at the FastRack meet in Houston, Texas, also on Saturday.

At the Armory track in New York, Sophie Murphy of Dundrum South Dublin AC, running for Iona College, won the women’s 5000m in 17:45.96 at the Ramopo College meet on Friday (January 21).

Also on Friday, Tristan Forsythe ran a personal best time of 8:14.59 for 3000m at the Gladstein Invitational, in Bloomington, Indiana.

Winner of the Art O’Neill trail race on Friday night into Saturday morning (January 21-22) was Alastair Higgins who clocked a time of 5 hrs 53 mins 33 secs for the 60km distance.

The event, first held in 2009, commemorates the flight of the eponymous O’Neill from Dublin Castle to Glenmalure via the hills of West Wicklow on a bitterly cold winter’s night on 6 January 1791. With O’Neill was his brother Henry and Red Hugh O’Donnell.

Although they made history as the only three prisoners ever to escape from the Castle, Art O’Neill, poorly equipped and physically feeble after months in prison, died in the attempt.

The event is a fund-raiser for the Dublin Wicklow Mountain Rescue Team.