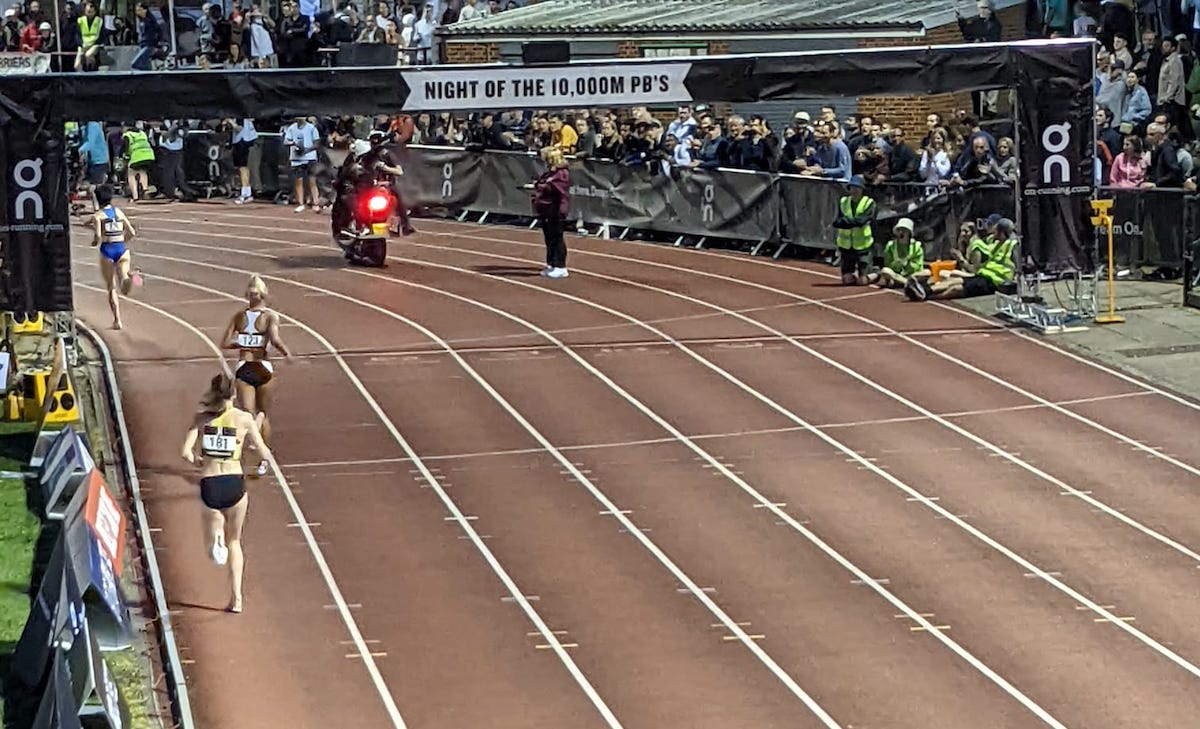 For the first time this year, the action this weekend was very much focused on the track thanks in large part to the return of the 25-lap spectacle in Highgate. Plenty more has happened also, so let me take you on a tour of some of the highlights of the past few days.

In perfect weather conditions (maybe more so for those watching the earlier races than those taking to 25 laps), the Night of the 10,000m PB’s made its long awaited and much anticipated return to Highgate Harriers’ Parliament Hill track.

After the mid-week withdrawal of probable race favourite Eilish McColgan, it become a much harder affair to predict who would take the win. It did however allow a thrilling race to unfold. Amy Eloise Markovc took the lead early on, before Izzy Doyle and Sam Harrison took turns at the front. Jess Judd used her track experience to reel Sam in over the last few laps and take the lead with 800m to go (the distance she raced over at her first World Championships back in 2013), producing a trademark strong finish to take the win in 31:22.24, securing her spot in the British team in Eugene in July.

Amy Eloise stayed in contention through the various surges to finish second, agonisingly crossing the line just half a second outside the qualifying standard for Eugene. Her time (31:25.57) was inside the European Championships standard, however, as was that of Samantha Harrison in third (31:30.63).

In fourth, Sarah Inglis (31:39.60) was comfortably inside the Scottish Commonwealth Games standard, whilst Fast Running’s own Hannah Irwin had a fantastic race to finish seventh in 32:25.34, a Northern Irish record and Commonwealth Games standard! Athletes inside 28:45 and 32:45 will also be in with a chance of selection for the GB team in the European 10000m Cup in France in two week’s time. The men’s race followed the form book, with domination by Italian Yemaneberhan Crippa dominating the race with a 27:16.18 clocking, after moving away from Sam Atkin and Emile Cairess with about four kilometres to go. The trio had taken turns to lead the race in earlier laps, but Crippa but in a significant surge that no one could respond to.

Sam and Emile finished in second and third (27:31.98 and 27:34.08 respectively), with Sam taking the UK Championship title. The duo were inside the European Championships and English Commonwealth Games standards.

The event also played host to the Emsley Carr Mile and Nike Millicent Fawcett Mile, which were won by Matt Stonier (3:54.89, in a race where ten men ran under four minutes) and Australian Georgia Griffith (4:27.81) respectively.

It was a fantastic evening that demonstrated why Ben Pochee has built such a strong reputation to be able to deliver an event with exciting racing, plenty of trackside entertainment and an electric atmosphere.

Saturday also saw the first of five British Milers Club Grand Prix to be held this summer, with the season kicking off at the University of Birmingham.

The 246 athletes competing were blessed with superb conditions, with an astonishing 58% of competitors setting PBs. Three hours of racing over 800m, 1500m, 5000m and the steeplechase saw qualifying marks set for the European Championships (2), Commonwealth Games (4), World U20 Championships (4) and European U18 Championships (5), alongside a British Record and British U23 Record in the 2000m steeplechase.

Highlights included a British Record for Aimee Pratt over the (admittedly rarely run) 2000m steeplechase. Her time of 6:08.14 took over three seconds off the previous mark and should provide a springboard into her first race over the longer standard-distance event. In second was a British U23 Record for Maisie Grice (6:21.17) who improved by over six seconds on the time she ran to win the BUCS title two weeks ago. It was a worthy reward for the University of Birmingham students who found creative ways to ensure the water jump was full (including the use of wheelie bins and changing room showers). The evening also hosted competitive 800m races, with Ben Pattison taking the win (1:45.44) against a field that included Tokyo Olympian Oliver Dustin and Sam Reardon in his first race since the World Indoor Championships in Belgrade. Ben’s time is a PB, European Champs qualifier and Commonwealth Games qualifier.

Isabelle Boffey ran well to win the women’s race over two laps with 2:01.47 and the third fastest time of her career (calling it now, she will run under two minutes this year), with a step-change improvement for Abigail Ives behind that secured a World U20 Champs qualifier (2:02.01). It was not the only meeting to be held at the Birmingham University track this weekend; it played host to the University’s first open meeting of the summer on Wednesday, incorporating BMC Gold Standard Races. Amongst the highlights of the BMC races were three athletes running qualifying standards for the European U18 Championships – Jess Bailey (9:19.91) and James Knockton (8:14.50) for 3000m and Iris Downes for 800m (2:05.64).

She may be better known for her performances in the steeplechase, but Aimee Pratt dipped under nine minutes for 3000m for the first time (8:59.57), whilst Tomer Tarragano (8:07.45 PB) won a competitive men’s race over the distance that saw the top seven run PBs. Iestyn Williams (1:50.64 PB) was fastest over 800m.

As well as bringing results of the Tracksmith Amateur Mile, held at the London Marathon Community Stadium on Thursday, I hope you’ll indulge me for a second to say thank you to Nick Willis, Tracksmith’s Community Manager who was due to pace the men’s elite race.

I entered the event last month and tweeted “can we start a campaign for Nick – one of my all-time favourite athletes – to pace a 4:40 race as well as the elites?”. Fast forward a month and a few messages, I found myself on the start line lining up alongside a double Olympic medalist who I have admired for many years and is partially responsible for my love of running. I don’t think I have enjoyed a race or experience more, and I just had to use this platform to publicly say thank you. Plus, I left Stratford with a PB and Striders of Croydon Club Record, what more could I ask for!

A few days on I still wonder in what other sport would one of the greatest athletes in that discipline so willingly do something like that? Not many I am willing to bet.

Elsewhere on the Track

Leamington Cycling & Athletic Club’s Open Meeting on Tuesday provided Callum Hanlon with a commanding win and PB (32:01.5) that saw him finish over three minutes ahead of the rest of the field. Zara Hadfield (41:37.2) was the first of two female entrants across the line.

Returning to the BMC and their Regional Races at Chester-le-Street. An evening comprising 800m races only, the fastest times went to Zak Old (1:53.79 PB) and Lois Creasey (2:15.09). Wednesday’s West Yorkshire League fixture in Cleckheaton provided Isabel Richardson (4:45.22) and Abdimalid Darood (4:17.58) with their fastest times over 1500m of 2022.

Plenty has been happening internationally also. Adelle Tracey ran the second fastest 1500m of her career (4:05.96) at the Puerto Rico International on Thursday, whilst Daniel Rowden opened his season with a 1:49.56 fourth place finish over 800m at Friday’s Doha Diamond League.

It was a busy few days for Jaymee Domoney at the Big South Championships in North Carolina. The Salisbury athlete is currently studying at Charleston and competed over 800m (1:50.72 PB), 1500m (3:56.23) and 3000m steeplechase (9:53.46 PB). Five races in three days! Rob Howarth recorded the quickest time over 800m of the Brits competing with 1:50.70, just a fraction outside his lifetime best.

Ending on the Road

Whilst a large proportion of distance runners found themselves in Highgate, there has been no shortage of road races across the United Kingdom.

The Chester Half Marathon saw well over 100 England masters athletes representing their country across age groups for 35 to 75+ having qualified over the course of the last 12 months. Omar Ahmed took and impressive win over the undulating course clocking 63:53. Representing England Alice Sunderland was the first woman in a time of 78:04. There were impressive age graded perforances throughout the England team notably v45 Kate Rennie running 79:08, age graded at 88.60% and v50 Paul Jones running 73:41 age graded at 88.48%.