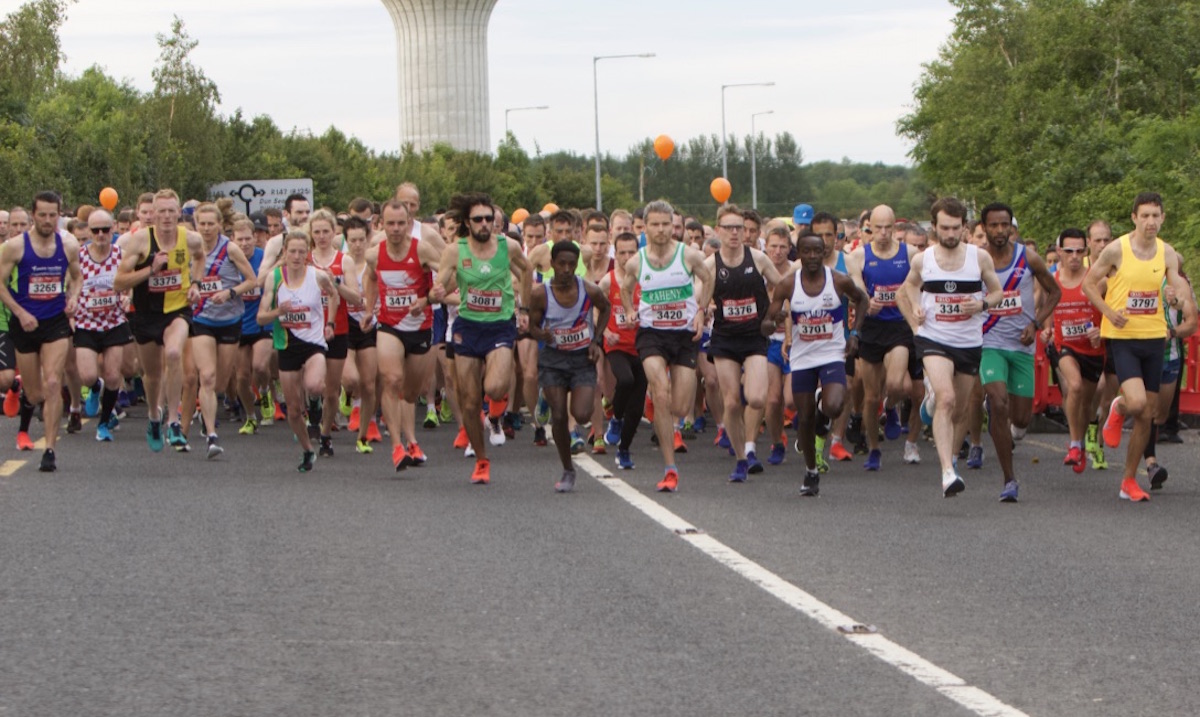 A stunning new course record of 32:18  from Fionnuala McCormack and a brilliant men’s race won by Hiko Tonosa were the highlights of the 40th Dunshaughlin 10km held in sunny conditions on Saturday evening (June 22).

McCormack, whose long-term aim is to qualify for Tokyo Olympics in the marathon, proved the class of the field in the women’s race, finishing over three minutes clear of the chasers led by Sinead O’Connor of Leevale AC in 34:51.

In the men’s race, Hiko Tonosa of Dundrum South Dublin AC continued his winning streak in the KIA Series although pressed hard by Mick Clohisey of Raheny Shamrock and Peter Somba of Dunboyne AC. Tonosa sprinted clear for victory in 29 mins 30 secs, with Clohisey just a second behind in 29:31 and Somba third in 30:16. Fourth in 30:50 was Eric Keogh of Donore Harriers, who finished second behind Tonosa in last year’s KIA Series.

In the team competition, the Raheny men came out on top, with Clohisey and Cillian O’Leary (in sixth place), backed up by Wesley O’Brien and Colm Cassidy. Rathfarnham WSAF was second and Donore Harriers third; a massive 59 teams finished the race.

In the women’s team competition, 67 teams finished with DSD beating Donore Harriers by a single point for victory. Niamh Devlin, Maria McCambridge and Cathryn Brady were the counting three. Scoring for Donore were Sorcha Nic Dhomhnaill, Sinead Lambe and Florence Curley. Truly this was a race worthy of national championships status.

Yared Derese of Carrick Aces, who is originally from Eritrea, was the runaway winner of the Waterford Viking Half Marathon on Saturday (June 22) in a time of 64 mins 55 secs – the fastest recorded for the distance on Irish soil for some time. A distant second in 73:01 was Freddy Sittuk. Ninth overall and first woman in 81:29 was Ruth Fitzgerald of Waterford AC. A total of 991 completed the run.

Making it a weekend double whammy was Sean Hehir of Rathfarnham WSAF AC who won the Summer Solstice 10km in Ennis on Saturday (June 22) with a time of 31 mins 19 secs and then the Strawberry Fair 10-Mile in Enniscorthy on Sunday in 52.02. First woman in Enniscorthy was Grace Kennedy of Donore Harriers in 65:17.

Winner of the Dublin Pride Run 5km which attracted a capacity 878 to the Phoenix Park on Friday evening (June 21) were Owen Fletcher of Dunboyne AC in 16 mins 51 secs and Grace Kennedy-Clarke of Donore Harriers in 19:01

Dunboyne’s Peter Somba was the winner of the Docklands 5km in Dublin on Thursday (June 20) in a time of 14 mins 56 seconds. A distant second was Andrew Sheehan of Leevale AC in 15:29, with triathlon specialist Neil Cornyn of Dunboyne AC third in 15:42.

First woman was Niamh Clifford of RCSI in 17:44. Annette Kealy of Raheny Shamrock was second woman and first W50 in 18:03 with Clare Sullivan of RCSI a close third in 18:08. Leevale AC won the men’s team prize with Sportsworld AC best of the women and Where’s the Finish Line? winning the corporate co-ed team category, which attracted a hundred teams. A total of 1,686 completed the race.

On the same night in Belfast, Gary Montgomery of Ryobi Runaways won the Grant Thornton Corporate 5km in 16 mins 57 secs. Lisa Knipe in ninth place from Almac was first woman in 18:15.

Winning the battle for top men’s team by a single second was Invest NI’s A team; McLaughlin and Harvey were second. First women’s team by some way was Danksa Bank, while best in the co-ed category was AECOM1.

Ireland qualified for the DNA (dynamic new athletics) quarter-finals on Tuesday June 24 after finishing fifth overall in the opening rounds at the European Games in Minsk on Sunday (Jun 23).

Ann Marie McGlynn of Letterkenny AC, aged 39, showed that age is no barrier to athletics success when she won the women’s 5000m at the Belfast Milers Club Meet, held at the Mary Peters track on Saturday (June 22).

McGlynn’s time of 16:09.35 saw her finish comfortably clear of Aoibhe Richardson from Kilkenny City Harriers who came home in 16:23.61 and Emma Mitchell of Team Nike third in 16:40.37. McGlynn is in the form of her life since completing her first marathon last April in Rotterdam where she ran a time of 2:39.22. Last month, she showed that she was completely recovered from her Rotterdam exertions with a personal best time of 33:53 at the Vitality London 10,000m.

McGlynn will now team up with Fionnuala McCormack of Kilcoole AC and Fionnuala Ross of Armagh AC at the European 10,000m Championships at Highgate.

Two records fell at the Tailteann Irish Schools Interprovincial match held in Santry on Saturday (June 22). In the girls’ 300m, Jennifer Kealy of Loreto Kilkenny improved the record to 33.39 secs, while in the girls’ pole vault, Orla Coffey of St Angela’s Cork soared over 3.50m to add 20 centimetres to the previous best.

On the track, Sean Donoghue of St Declan’s Cabra had a solid victory over Dylan McBridge from Grosvenor Belfast in the 1500m, while Michael Morgan of Summerhill Sligo won the 3000m in 8:54.64.

Double winners on the day were Yemi Talabi of Moyne CS in the 100m and long jump and Ciara Sheehy of St Mary’s Charleville with wins in the shot and hammer. Winners were booking their places on the Irish team for the SIAB International next month in Wales.

Highlight of the AI Open Games on Saturday in Santry was a 1.84 in the women’s high jump for Sommer Lecky of Finn Valley AC. Winning the 200m in 20.91 secs was Marcus Lawler of St LOT AC. Shane Howard of Bandon AC beat many times Irish champion Adam McMullen of Crusaders AC in the long jump with a leap of 7.44m.

A day later, multi-eventer Elizabeth Moreland of Cushinstown AC threw 44.97 to win the javelin and prove that she’s returning to full fitness after a stress fracture of the foot. In a quality 100m, Marcus Lawler of St LOT AC proved fastest in 10.65 secs, with Joseph Ojumumi of Tallaght AC second in 10.72 and Jason Smyth of Derry TC third in 10.82.

Also taking place over the weekend were the National Combined Events, with both defending champion Shane Aston of Trim AC and previous champion Michael Bowler of Enniscorthy AC crashing out early when neither completed the 400m on the first day of competition. That gave victory to Michael Breathnach of Galway City Harriers with 5032 points.

Winning the junior title was Aaron Malik of St Brendan’s AC with 46.16 points while first youth was Diarmuid O’Connor of Bandon AC with 6,469 points. Aston and Bowler are expected to represent Ireland at the European Team Championships in Madeira in a fortnight’s time.

Irish ultra-runner Paul Tierney broke the record for the fastest time taken to summit all the Lake District’s Wainwright peaks.

The Ambleside AC athlete began the challenge at Moot Hill in Keswick on Friday at 8am and finished on Thursday (June 20) in an unofficial time of 6 days, 6hrs 5mins having reached the summit of all 214 fells recorded in Wainright’s guides to the fells.

His time knocked seven hours off the time of 6 days 13 hours set by Steve Birkinshaw five years ago, which itself had broken Joss Naylor’s 28 year old record. The challenge took in 512km and 36,000 ?/ fo climb. His support included his partner Sarah McCormack, an Irish mountain running international.

Tierney, aged 36, has twice completed the tough Tor des Géants, a 205-mile race through the Italian Alps that includes 24,000m of ascent and is a former winner of the Lakeland 100 event and the Wicklow Trail 52km.

Uphill all the way

Killian Mooney of Dundrum South Dublin AC had almost a minute to spare when winning the Powerscourt Uphill race from Crone Woods in Co Wicklow on Wednesday (June 19).

Keith notched up a total of 234.58 km, catching and passing the defending champion Aidan Hogan from Rising Sun AC in the final hour. Hogan held on to second place ahead of Padraig Mullins.

First woman and fourth overall was Paula Wright of Newport AC with 218.06km – a big improvement on the 196.3km Wright had run a year earlier for third place. For a second year, Louise Smart from Newtownabbey placed second with Lorraine McMahon finishing third.

Men’s relay winners with a new record distance of 335km were Willowfield Harriers. Orangegrove were first of the mixed teams and Natty’s Nutters first women’s team.

From parkrun to 95 miles, with everything in-between – The UK weekend roundup
10 fastest parkrun times in Ireland on Saturday 29th June (2019)