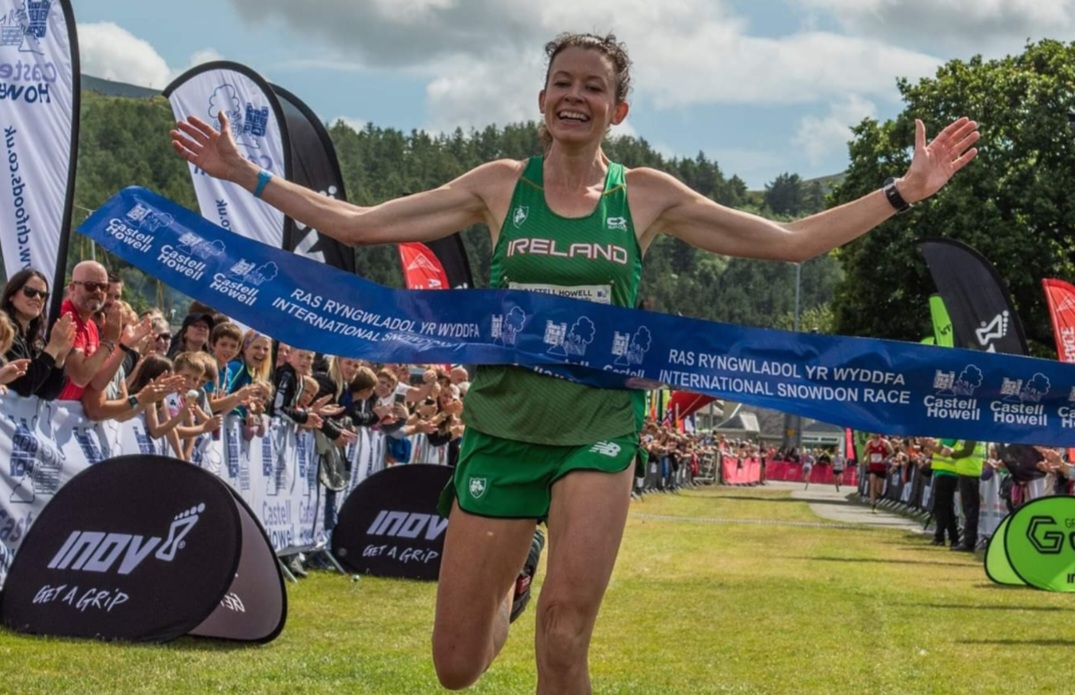 Sarah McCormack winning in Wales, which we promise to update when Robbie gets into his emails. Photo: Sportpictures Cymru

The Irish round-up is packed full of action from the weekend. All brought to you by Lindie Naughton.

Making it a Dublin double in the Premier Division at the National Track and Field League final in Tullamore on Sunday (August 14) were the Dundrum South Dublin women and the Clonliffe Harriers men.

A lot closer was the women’s competition and going into the final 4 x 400 relay, DSD has just three points to spare on Tipperary County. When they finished second and Tipperary fourth they knew victory was theirs. It was an eleventh win for the club since its first win in 1986 and its seventh since 2011. In division 1, Enniscorthy AC, competing in the league for the first ever time, battled it out with Tir Chonaill for victory in the women’s competition, with a single point in it. Among their winners were Blanaid Fogarty with a 200m/400m double and Elizabeth Gahan 800m.

Other notable performances on a sultry day in Tullamore came from Niamh Kearney of Raheny Shamrock who won the women’s 1500m in style; Michael Morgan with a double for Sligo County in the division 1 1500m and 5000m, and Paul O’Donnell of DSD AC who won the premier steeplechase and later finished third in the 1500m. At the National Masters’ Track and Field Championships in Tullamore on Saturday (August 13), Caitriona Dowling of Rathfarnham WSAF AC was just one of many notable winners, taking the W35 800m title in a time of 2:17.83.

In the men’s M40 800m, Garry Milligan North East Runners AC kicked clear of the pack in the home straight for victory in 2:05.34 ahead of Adrian Boyle from Derry Track Club and Denis Couglan of St Finbarr’s AC.

James Ledingham of Kilkenny City Harriers made it a double, winning a closely fought M35 800m and following that up with victory in the 1500m.

Competing in his 49th consecutive Irish Masters Championshipos was the great Pat Naughton of Nenagh Olympics. “Even if I’m in a wheelchair, God willing I’ll be back next year for my fiftieth,” said Pat. He does much of his training by running around his house. “It keeps me young”.

Luke McCann broke his own Irish 1000m record when running a time of 2:16.40 at the Diamond League round in Monaco on Wednesday (August 10). McCann finished seventh in the race.

John Fitzsimons of Kildare AC finished a close second in a thrilling men’s 800m at the Istvan Gyuli Meet in Hungary on Monday (August 8).

In the chase for the line, Fitzsimons just took the runners-up spot from Isaiah Jewett of the USA, with both athletes given a time of 1:45.70. Winner was Nicholas Kiplangat Kenebnei of Kenya in 1:45.49.

In the women’s 800m, Irish record holder Louise Shanahan of Leevale AC finished sixth in a time of 2:02.10.

Peter Somba’s winning streak continued on Friday (August 12) when he won the Kells Heritage 5km in a time of 15:08.

Two days later, Somba won the Rock the Lakes Half Marathon in Craigavon, Co Armagh in 68 mins 36. Gideon Kimosop was second in 68:47 and Aislinn Crossey first woman in 83:59. Crossey is a former Irish 800m champion.

Her time of 3 hrs 4 mins 12 secs knocked an astounding eight minutes off her best for this classic 31km race which takes in five peaks of over 4000m on its point-to-point route through the Val d’Annniviers.

McCormack, winner of the World Mountain Running Association’s World Cup Series in 2019, also has three wins in the Snowdon International Mountain Race and took team gold with the Irish cross-country team in 2012. As well as a Ph.D in biogeochemistry, McCormack is a certified athletics coach.

At the second round of the Longford trail run series, Oisin Lane was again the winner for Mullingar Harriers in 16:49 for the 5km distance. Rachael Keenan of Longford AC was first woman in 20:15